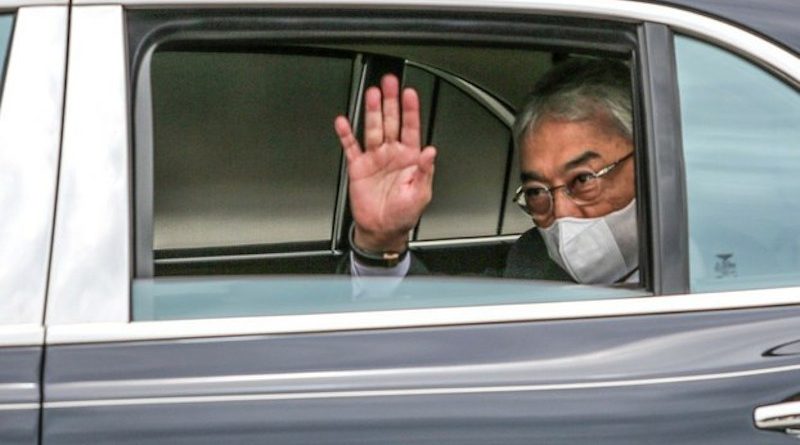 Malaysia's King Al-Sultan Abdullah Ri’ayatuddin Al-Mustafa Billah waves to reporters as he arrives at the gate to the National Palace in Kuala Lumpur ahead of a meeting there with his fellow Malay Rulers, Oct. 25, 2020. [Photo Credit: S. Mahfuz/BenarNews]

When Malaysia’s Yang di-Pertuan Agong, or king Al-Sultan Abdullah Al-Haj rejected Prime Minister Muhyiddin Yassin’s request to declare a state of emergency on October 25, many sections of Malaysia cheered him on.

It was the king who on February 29 cut through a political crisis to appoint Muhyiddin the new prime minister, giving Muhyiddin, a veteran politician and president of Parti Pribumi Bersatu Malaysia, the mandate to head a shaky government that has stayed in place throughout the summer and autumn. He also has sat on a request from Anwar Ibrahim to dissolve the government for another election to remove Muhyiddin from power, in consultation with the country’s eight other sultans.

Although many of the country’s increasingly modern urban classes scorn the monarchy as a medieval vestige of royalty who block roads with their motorcades, misuse their positions for business advantage, commit violence on commoners without facing the law, force state governments to pay their debts and misuse their royal prerogatives in other ways, the royalty thus has begun to reassert itself in the Malaysian political universe.

It has been a relatively slow and cautious transition. The council of rulers, who guard the country’s position as a Muslim country, went into a relative eclipse from their former power when then-Prime Minister Mahathir Mohamed politicized them in two episodes in 1983 and the early 1990s. In 1983, he forced through a  constitutional change to allow acts of parliament to be signed into law without royal assent.

Under Section 32 of the original 1957 Constitution, the rulers were immune from prosecution in any court of law. Mahathir emotively highlighted the rulers’ abuse of power after a football coach was abused at the Johor Royal Palace by the late Johor Sultan, pushing through a constitutional amendment to make rulers vulnerable to being charged or sued in their personal capacities in a special court.

Mahathir received a fair amount of public support in his campaign to take the sultans down a peg because of the behavior of several of them, particularly members of the Johor royal family, In past years other royal families have unloaded gambling debts onto the treasuries of their state governments.

Nonetheless, despite those concerns and despite his amendments, as with Thailand’s strict lese majeste laws, those who criticize Malaysian royalty can face the law. In 2012, the former Perak chief minister Mohammed Nizar was severely attacked for his criticism of the Sultan of Johor’s purchase of special number plates at a government auction for RM520,000. Later that year, a quantity surveyor Ahmad Abdul Jalil was jailed for ridiculing the Sultan of Johor on social media. Once again, earlier this year, a 73 year-old veteran radio announcer and actor was arrested over a Facebook post concerning the Johor Prince Tunku Ismail Ibrahim, known as TMJ.

Last year the Sedition Act, promised to be abolished by the then-Pakatan Harapan government, was used to arrest Parti Socialist Malaysia activist Khalid Ismath and hold in in remand. A single mother was charged last July for allegedly making insulting remarks against the Yang di-Pertuan Agong Abdullah Sultan Ahmad Shah on line, in what has been described by Lawyers for Liberty director Melissa Sasidaran as a surge in online policing of social media.

The Malaysian Communication and Multimedia Commission (MCMC) actively watches social media for any criticism of the monarchy. The Sedition Act,  which the former Pakatan Harapan promised to abolish is being used as a proxy lese majeste.

The sultans have used their powers to appoint chief ministers in defiance of state coalition leaders, as in Terengganu in 2008 when the sultan insisted that Ahmad Said be chief minister over UMNO’s choice Idris Jusoh. In Perlis in 2009 the Raja refused to swear in Shahidan Kassim as chief minister and swore in Md Isa Sabu instead. In Selangor 2014 in what was called the Kajang move, the Sultan refused to appoint then-opposition leader Anwar Ibraham’s wife Wan Azizah as chief minister, picking Azmin Ali even though he didn’t have apparent support from the majority of assembly members. In Perlis 2018 the Raja swore in Azlan Man as chief minister, even though the ceremony was boycotted by assembly members who supported Ismail Kassim.

The monarchy’s influence over the political arena extends well beyond appointments. The government had to back down on ratifying the Rome Statute when the Johor Sultan argued that the treaty on crimes against humanity, genocide, and war crimes would undermine Islam, the Malays, and the monarchy.  The Johor Sultan ordered the state assembly to ban e-cigarettes in 2015 and unilaterally banned vaping in Johor in 2016.

The monarchy has enormous informal power. Sultans hold regular weekly meetings with their executive councils, providing an opportunity each week to give views on the running of the state to the chief minister and executive councilors. Insiders have told Asia Sentinel that Sultans are generally very forthright on what they think is best for the state.

Sultans make regular visits to federal and state government departments, agencies, universities, schools, colleges, police and military stations, mosques, and organized events around their states meeting with politicians, civil servants, academics, police, military personnel, and people generally. Most also hold both formal and informal sessions at the palace where state business is often discussed in small informal groups. They ensure civil servants know their line of thinking, which sometimes is much more powerful than directives given by the state executive.

The majority of members within the civil service are very loyal. In each state a select group of civil servants, academics, medical doctors, police, military form what is called by insiders as the “A Team”. These groups are very fond of royalty. Each member personally knows the sultan and his family members on a close personal basis. These “A Teams” network through common alumni such as the elite Malay College in Kuala Kangsar which extends nationwide with people who share the same sense of purpose.

The Sultans are also patrons of traditional Malay martial arts or silat organizations in which members have cross-memberships with Malay rights organizations such as Perkasa, and Perkida. Organizations like Perkasa were opposed to the ratification of the UN International Convention on the Elimination of All Forms of Racial Discrimination (ICERD) on the basis that it would threaten Malay rights.

Section 44 of the constitution places the Agong beside the Senate and House of Representatives with responsibility for legislative power. Some loyal groups see the Sultan as the absolute law, more trustworthy than politicians who come and go. Article 153 of the Constitution gives the Agong the power to safeguard the position of the Malays (and indigenous peoples). A strong sense of Malay identity maintains the traditional feudal cultural environment which has a long history.

This is a continuation of the long-standing social contract between the Sultan and the Rakyat (people), something that existed long before the formation of Malaysia. This can’t be seen at a national level but is extremely important at the state level. Thus, in the eyes of many government servants, loyalty to “Tuanku” overrides loyalty to the democratically elected government.

The Agong is also the Commander in Chief of the Malaysian Armed Forces. Sultans hold military ranks, are ceremonial commanders of military regiments, chancellors of universities, and patrons of various organizations.

Traditionally prime ministers have been lenient with the monarchy. Tunku Abdul Rahman, “Bapak Malaysia,” the first prime minister was a member of the Kedah Royal Household. Both Najib Razak and Abdullah Ahmad Badawi tended to be subservient and allowed the monarchy a lot of business concessions.

Although the Malaysian monarchy is technically a constitutional one. the institution is at the apex of an ancient Malay class-based authoritarian feudal system with all its artefacts, ceremonies, customs, and language. To some degree, Malaysia can still be seen as a patriarchy rather than a democracy. The position of the Malay monarchy is embedded deep within the Malay psyche, giving them patriarchal authority.

Traditionally, UMNO, the ruling party for over 60 years, defended the royal institution. The rise of Ketuanan Melayu narratives after the introduction of the New Economic Policy, has strengthened the monarchy’s position even more.  There is no republican movement. It is also difficult to see any sources that may nurture one in the near future either. There is public euphoria when royalty do something popular with the Rakyat (people). Malaysians want their monarchy to work. This probably stems from the long history of Sultans on the peninsula, and their position so embedded within the Malay cultural psych.

The concept of monarchy is embedded within the question of “what Malaysia should be,” something which is not being discussed. The Arab-Islamization of Malaysia is embedding the monarchy even more within Malaysia’s national identity, than ever before. The monarchy is a latent safeguard of a Malay-Muslim Malaysia, which the governing political parties firmly support.

If anything, the subluminal powers of the monarchy are set to increase over the next generation, rather than wane. Royalty’s strong nexus with Islam will ensure that. The political domain will follow this, rather than change this. Malaysia is set to reaffirm itself as a Malay state.

Home » Why Malaysia’s Monarchy Is Set To Stay – Analysis