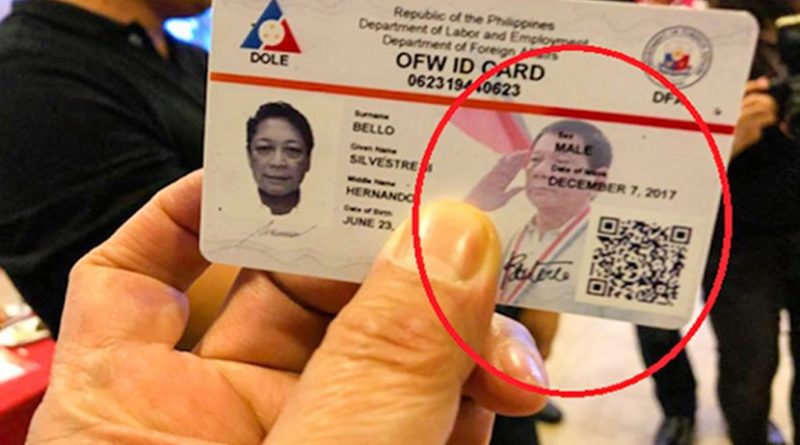 A sample of the new identification card for Filipino migrant workers with the picture of President Rodrigo Duterte. Photo supplied by UCAN

A new identification card for Filipino migrant workers with Philippine President Rodrigo Duterte’s face on it has drawn widespread flak, including from a Catholic bishop.

Bishop Ruperto Santos of Balanga, head of the Episcopal Commission on Migrants and Itinerant People, said the card should only have the name and picture of the bearer.

“What is the use of having the picture of the president on it?” asked the prelate. He said Duterte’s signature as president on the card is “more than enough.”

“An [identification card] with the picture of a president can lead to questions,” said Bishop Santos emphasizing that he supports the issuance of the card to migrant workers.

“It is helpful for identification and valuable for easier acquisition of documents,” said the prelate.

Duterte’s photo on the card, however, is the same size as the photo of the card owner.

Netizens took to social media to criticize the new identification card, saying that putting the president’s photo on the card is “shameless self-promotion.”

The Labor Department, which issued the card, said in a statement that it is still in the initial stage of implementation.

“This is only the first phase of implementation and will cater first to our [returning workers] until the system is ready for all [Filipino migrant workers],” said Labor Secretary Silvestre Bello III.