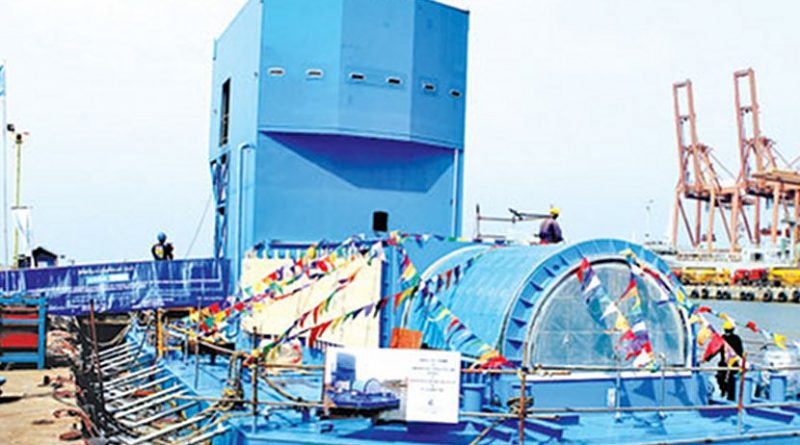 Eng. A K Diyabalanage, Chairman, Managing Director AKDA said that all these innovation were ‘not copies’, but original engineering marvels from Sri Lanka. He said that it took Colombo Dockyard five months to build this restaurant which is 22.5 meters long and weighs about 220 tons. The total investment is around US$ 1.5 million.

The state of the art under water restaurants could accommodate nearly 30 people and would be delivered to Uthuru Maafara Luxury Hotel island owned by Akbar Brothers in the Maldives next Monday, by sea. The underwater restaurant would have two lifts to carry guest and will also offer 180 degrees of underwater sea view. It would be placed six meters below sea level.

Diyabalanage said that this is the fifth underwater leisure sector project they have completed and delivered to the Maldives hotels. “We are now looking at accepting bigger orders from all over the world including buyers from Europe to help Sri Lanka to get more foreign exchange.”

“We started this enterprise in 1985 as a local construction company specializing as an offshore contractor and a craft builder. Over the years we’ve diversified into many and varied disciplines because of our manifold forte in agriculture; plantation and realty; designers, consultants and contractors.”

“We have also built the futuristic Air Traffic Control Tower in Male International Airport, Republic of Maldives largest Harbour, Dharavandhoo Domestic Airport in Maldives. In addition we have so far constructed 36 harbours and 8 airports and this is our 6th underwater facility project. These projects have helped Sri Lanka to earn over US$1 billion so far.”

He said that he played a major role in the development of Trincomalee harbor and the Navy facility. “Unfortunately no major developments are happening now and the Trincomalee tourism, maritime potential is underutilized.

Diyabalanage said that they also developed a new typology of architecture known as aquatecture meant to provide either leisurely temporary accommodation or permanent residence when time on land is no longer an option.