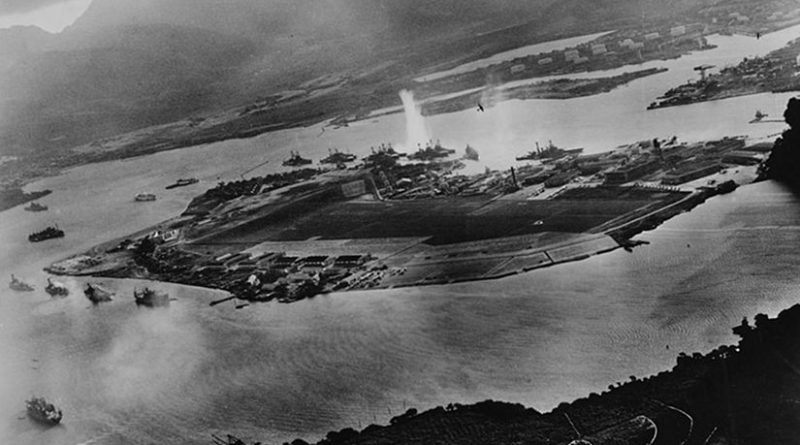 Photograph taken from a Japanese plane during the torpedo attack on ships moored on both sides of Ford Island shortly after the beginning of the Pearl Harbor attack. U.S. Navy photograph, Wikipedia Commons.

On December 7, 1941, Japan attacked Pearl Harbor and the U.S. entered the Second World War.  A war of horrors, it normalized the intensive, barbaric bombing of civilian populations.  If the Spanish Civil War gave us Guernica and Picasso’s wrenching painting, WW2 offered up worse:  London, Berlin, Dresden to name a few, the latter eloquently described in Kurt Vonnegut’s “Slaughter House Five.”  Against Japan, the firebombing of Tokyo, and above all the revulsion of Hiroshima and Nagasaki radiated a foretaste of ending life on the planet.

Reparations demanded from Germany had led to the rise of Adolf Hitler and a thirst for revenge.  Thus Hitler demanded France’s 1940 surrender in the same railway carriage where the humiliating armistice was signed in 1918.

If the war to end all wars — its centenary remembrance a month ago — killed 20 million plus, the successor tripled the score.  Disrupted agriculture, severed supply chains, fleeing civilians, starvation and misery; civilian deaths constituting  an inordinate majority in our supposedly civilized world.

One of the young men baling out of a burning bomber was George H. W. Bush.  He was rescued but his crew who also baled out were never found, a thought that is said to have haunted him for the rest of his life.  He went on to serve eight years as vice-president under Ronald Reagan and then four more as president.  Last week he passed away and was honored with a state funeral service in Washington National Cathedral.

His legacy includes the first Iraq war and the liberation of Kuwait.  While he avoided the hornet’s nest of ethnic and religious divisions in Iraq itself, the war’s repercussions led to the Clinton sanctions and the deaths of half a million children.  The UN representative overseeing the limited oil-for-food program, Irishman Denis Halliday, resigned in disgust.  Not to forget the infamous answer by Clinton’s Secretary of State Madeleine Albright.  Asked by Leslie Stahl if it was worth the lives of 500,000 children … more than that died in Hiroshima, she answered:  “I think this is a very hard choice, but the price — we think the price is worth it.”  (CBS 60 Minutes program, May 12, 1996).

Note the “we” in her answer.  Who else does that include but our “I-feel-your-pain” Bill Clinton.  Hypocrisy, arm-twisted donations to the Clinton Foundation while wife Hillary was Secretary of State in the Obama administration; her shunning of the official and secure State Department email server in favor of a personal server installed at her request and the subsequent selective release of emails.  Well who cares about verifiable history these days anyway as the following demonstrates.

Yes, there was another anniversary this week for a different kind of war.  This time in India.  After securing freedom from the British, a secular tradition was proudly espoused by the patrician Nehru and the epitome of nonviolence, Gandhi.  It is now in the process of being trampled in a war against minorities.  The communal war includes the massacre of Muslims in Gujarat for which Narendra Modi was barred from the U.S., a ban lifted only when he became prime minister.  He, his party and his allies have been also responsible for the destruction of the Babri Mosque.  An organized Hindu mob tore it down on December 6, 1992; hence the shameful anniversary.  Built on the orders of the first Mughal emperor Babur, its purpose was to cement relations with Hindu rajas by also sanctifying for Muslims a place holy to Hindus and held traditionally to be the birthplace of Rama — famous from Hindu epics for fighting evil with the assistance of a monkey god’s army … although one is advised to avoid close contact with temple monkeys when visiting.

As the first Mughal, Babur’s hold on India was tenuous and he actively sought alliances with Hindu rulers of small states against the pathans whose sultan he had just defeated.  That affinity continued during the entirety of Mughal rule and one manifestation was frequent intermarriage with Rajputs.  Several emperors had Hindu mothers including Shah Jahan the builder of the Taj Mahal.  In the end, Babur’s fears were warranted because Sher Shah Suri did marshal those pathan forces and throw out his son Humayun, the second Mughal ruler.  It was only Sher Shah’s untimely death during the capture of Kalinjar (a Hindu fort then held by Raja Kirat Singh) that made Humayun’s return possible.

The destruction of the mosque was a historical wrong if ever there was one, but then Mr. Modi has never been bothered by history.  He is also not bothered that his party’s fairy tale revision of school history books is a scandal.  For similar reasons, Indian history on Wikipedia is too frequently tarnished, requiring verification from other sources to be properly informed.

The wrongs of communities, just as the wrongs of war, can lead to repercussions unanticipated and cataclysmic.  Yugoslavia is an example in living memory.  Clearly, any ruler of a multi-ethnic, multi-cultural country contemplating a path of communal dominance must take note before he is hoisted with his own petard.

This article first appeared on Counterpunch.org