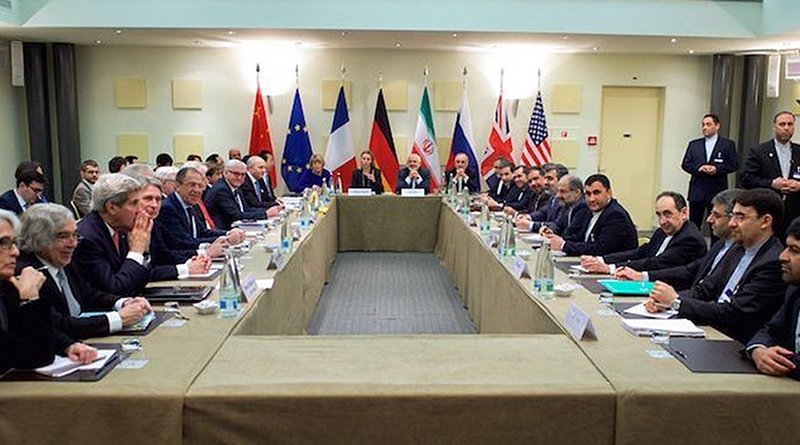 The ministers of foreign affairs of the United States, the United Kingdom, Russia, Germany, France, China, the European Union and Iran meeting in Lausanne in March 2015, a few weeks ahead of the nuclear deal was struck in Vienna. Credit: U.S. Department of State.

Since U.S. President Donald Trump abandoned the JCPOA, also known as the “Iran nuclear deal”, in May 2018, a widespread view is that the regime in Tehran is yearning for an atomic bomb.

Washington experts, however, maintain that while Iran’s violations of the JCPOA “are serious, they are reversible and they do not suggest, as some have alleged, that Iran is dashing to acquire a nuclear bomb“.

JCPOA, the Joint Comprehensive Plan of Action, is the nuclear deal between Iran and the P5+1 (the five permanent members of the United Nations Security Council—China, France, Russia, United Kingdom, United States—plus Germany) together with the European Union.

Arms Control Association Director for Nonproliferation Policy, Kelsey Davenport, and Executive Director, Daryl G. Kimball argue that “Iran’s decision to breach limits on its nuclear program put in place by the 2015 deal is an unfortunate but unsurprising response to U.S. President Donald Trump’s irresponsible choice … to reimpose sanctions on Iran in violation of the agreement and his administration’s aggressive campaign to deny Tehran any benefit of remaining in compliance with the accord”.

They urge France, Germany and the UK in a statement on January 14 to “redouble their efforts to restore full implementation” of the Iran nuclear deal by all parties and to prevent the collapse of this “effective nonproliferation agreement”.

The statement considers it “critical” that the remaining parties to the JCPOA – after the walkout of the U.S. administration – use the dispute resolution mechanism to restore rather than undermine confidence in the nuclear deal.

Davenport and Kimball laud “the effort spearheaded by French President Emmanuel Macron to return the United States and Iran to compliance with the accord and commit both sides to negotiations on a range of issues, including a long-term framework to guide Iran’s nuclear program” and describe it as “a pragmatic and viable option that addresses concerns in both Tehran and Washington”.

The three European governments announced on January 14 that they are triggering the dispute resolution mechanism in the 2015 nuclear deal to respond to Iran’s breaches of key nuclear limits.

Davenport and Kimball warn however that by triggering the JCPOA’s dispute resolution mechanism, the three European parties to the nuclear deal increase the risk that UN Security Council sanctions on Iran will be reimposed.

The Arms Control Association’s statement cautions: “Snapping back UN sanctions lifted by the JCPOA would collapse the deal and could lead to an unrestrained Iranian nuclear program subject to far less intrusive monitoring than is required under the nuclear agreement. This would create a new nuclear crisis that undermines international security and further increases the risk of war.”

The statement by Davenport and Kimball came within four weeks of Security Council briefing by the UN Under-Secretary-General for Political and Peacebuilding Affairs (DPPA) Rosemary DiCarlo on nuclear non-proliferation, and resolution 2231 that specifically backed the JCPOA.

Ms. DiCarlo criticized both Iran and the United States for putting strain on the groundbreaking 2015 deal to monitor Iran’s nuclear programme, which she stressed remains a “cornerstone of international peace and security”.

She said the “full and effective implementation” of the JCPOA was “key to ensuring the peaceful nature of Iran’s nuclear programme and to secure tangible economic benefit to the Iranian people.”

While the U.S. decision to pull out of the deal was a source of “regret”, so was “the recent steps taken by Iran to reduce its nuclear-related commitments”, Ms. DiCarlo said.

“Certain actions taken by the United States, since its withdrawal from the Plan, are contrary to the goals of the Plan”, she said and also referred in this context to the re-imposition of its national sanctions lifted under the Plan, and decision not to extend waivers for the trade in oil with Iran.