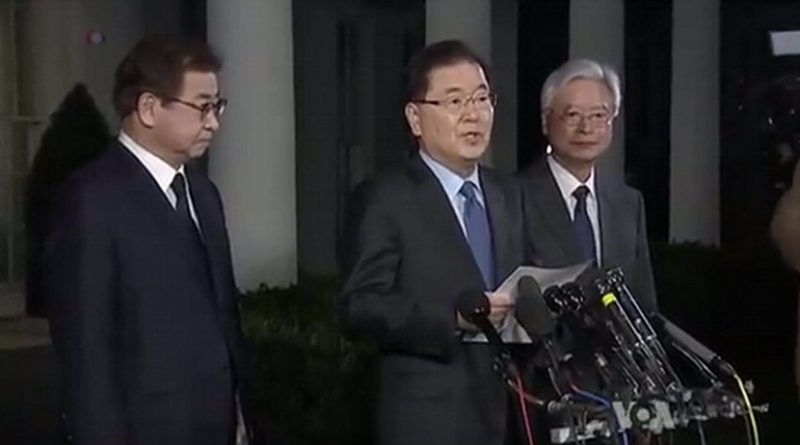 On March 8, a South Korean envoy was debriefed at the White House after their meeting with North Korea’s Kim Jong Un in Pyongyang. President Trump did not hesitate to accept Kim‘s invitation for a denuclearization talk. Strangely, however, North Korea’s state-run media have since kept silence about what would be a historical summit between the two.

After their meeting with President Trump and his cabinet members, the South Korean envoy made an official announcement to White House reporters outside the Oval Office about what the North Korean leader formally agreed on with them.

But scrutiny of the envoy’s announcement in Seoul two days earlier reveals that their prepared announcement at the White House gravely misrepresented the North Korean agenda and the U.S. position on denuclearization of North Korea. This article critically analyzes the nature of their misrepresentation.

Denuclearization of the Korean Peninsula versus North Korea

The envoy’s March 6 announcement in Seoul laid out a five-clause agreement between the two Koreas, of which Clause 3 and Clause 4 are relevant here (translation mine).

3. North Korea made clear its resolution for denuclearization of the Korean Peninsula, and also made it clear that, if military threats to the regime are removed and the regime’s security and safety are guaranteed, they would have no reason to possess nukes.

4. North Korea expressed willingness to have open-minded and candid talks with the Unites States for discussion of denuclearization issues and normalization of the North Korea-U.S. relationship.

Obviously, the North’s Kim agreed on talks with President Trump under important preconditions and that the talks would proceed on the premise of “denuclearization of the Korean Peninsula,” not denuclearization of North Korea, contrary to what the Trump administration has demanded.

In other words, Kim simply reiterated what North Korea had insisted at the failed six-party negotiating table before: In exchange for denuclearization of North Korea, the United States must withdraw its troops from South Korea, have a nonaggression pact and peace treaty with North Korea, and guarantee the security and safety of the Kim regime.

This same envoy made an announcement at the White House and said that Kim “is committed to denuclearization” and that “[t]he Republic of Korea, along with the United States, Japan, and our many partners around the world remain fully and resolutely committed to the complete denuclearization of the Korean Peninsula.”

The envoy’s public statements are woeful and troubling in two respects. The South’s presidential delegation effectively declared to the United States and its allies that South Korea would fully and firmly endorse North Korea in favor of Kim’s agenda and against Trump’s position on a denuclearized North Korea. In addition, their statement irreparably distorted the U.S. position on North Korea’s nuclear crisis. The United States has never been committed to denuclearization of the Korean Peninsula. Moreover, Kim’s stated preconditions for his meeting with Trump were deliberately omitted in the South Korean envoy’s official statement to White House reporters.

Could the South Korean delegates not understand Kim’s reference to denuclearization of the Korean Peninsula? No. Not only has it been used numerous times before, the South Korean envoy included the director of the nation’s top spy agency, Suh Hoon, who cannot say he has no understanding of its meaning as intended by North Korea.

The political aftermath of this ill-fated statement is beyond imagination. South Korea must take full diplomatic responsibility for the deliberate misrepresentation of the North Korean leader’s intentions and U.S. President Trump’s position on North Korea’s nuclear crisis, as announced by its presidential envoy to the American people.

Was that the reason why the White House asked the South Korean delegates to deliver their prepared announcement alone, without being accompanied by U.S. officials?

Home » The Devil Is In The Detail – Analysis

One thought on “The Devil Is In The Detail – Analysis”