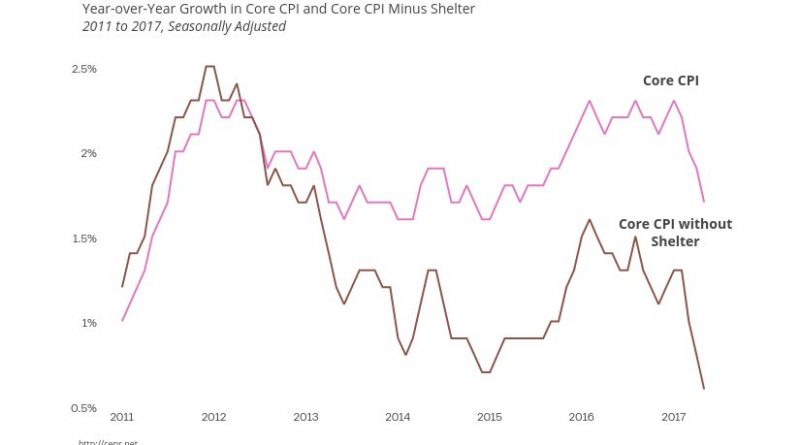 Both indices are showing lower rates of increases in May than they had earlier in the year. The year-over-year change in the overall CPI peaked at 2.8 percent in February and has fallen sharply over the last three months. Core inflation was slightly over two percent at the end of 2016 but also has been trending lower in recent months. The annualized rate of inflation in the core index has been just 0.7 percent, comparing the average for the price index in the last three months with the average for the prior three months.

If the shelter component is taken out of the core, the numbers are even more striking. The core CPI excluding shelter has risen just 0.6 percent over the last year. The annualized rate of inflation core, excluding shelter, in the last three months compared with the prior three is actually -0.6 percent. In other words, core inflation would be negative if not for the rise in rental prices.

Even in the case of rental inflation there appears to be some slowing. The year-over-year increase in the owners’ equivalent rent index was 3.3 percent in May. It had peaked at 3.6 percent in December. The annualized rate comparing the last three months with the prior three months is just 3.3 percent, indicating a substantial slowing. The index for rent proper has risen somewhat more rapidly over the last year, increasing by 3.8 percent year-over-year. This index is likely due to the fact that the rent proper index also includes some utilities, which might have risen rapidly in price in many areas.

New car prices have risen by 0.3 percent over the last year and fell by 0.2 percent in May. They continue to be held down in part by a glut of used cars on the market, a legacy of the proliferation of repossessed cars that has resulted from subprime car loans gone bad. Used car prices fell 4.3 percent year-over-year and fell by 0.2 percent in May.

The price reports for May indicate that inflation is actually decelerating slightly rather than accelerating. This is in spite of the fact that the unemployment rate is below the level that most economists consider to be the NAIRU. Of course, since wage growth also appears to be slowing, this pattern in prices is less surprising. The Fed seems determined to increase interest rates today, but with inflation below the Fed’s 2.0 percent target (with the PCE deflator as the measure) and heading downward, future rate increases will be hard to justify.