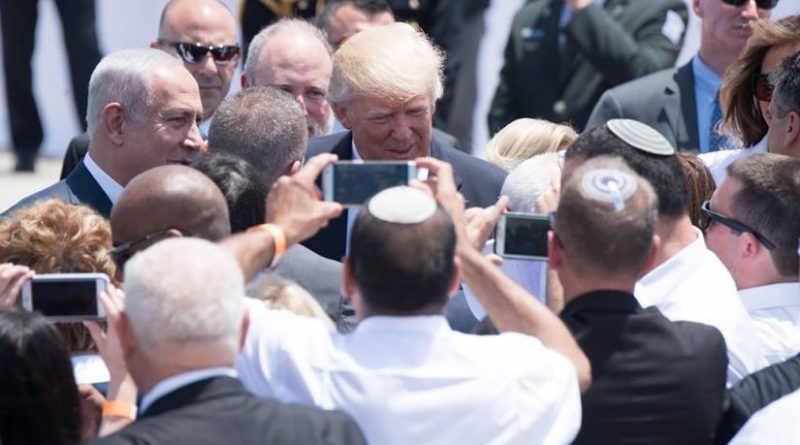 Ambiguities and vacillations surround many aspects of the Trump administration’s policies or lack of them, both domestic and foreign, but one element seems clear. President Donald Trump appears determined to pursue an Israeli-Palestinian accommodation, within the context of a wider US-led anti-Islamist, anti-Iran, cooperative effort involving “moderate” Middle East states including Israel. The signs that something’s afoot seem to be proliferating

Highly skilled in the arts of wheeling and dealing, Trump’s interest was engaged in the possibility of brokering a peace deal between Israel and the Palestinians from early on in his bid for the presidency.

On the campaign trail back in February 2016 Trump declared, in his inimitable style: “That’s probably the toughest deal in the world right now to make. It’s possible it’s not makeable because, don’t forget, it has to last. A lot of people say an agreement can’t be made, which is OK – sometimes agreements can’t be made. I will give it one hell of a shot. I would say if you can do that deal, you can do any deal.”

A week or two later there were rumours of a UN Security Council resolution in the making, aimed at setting out the terms for an Israeli-Palestinian agreement. Vehement in his opposition to this initiative, Trump took the opportunity to set out his own deal-making philosophy.

“Let me be clear: An agreement imposed by the United Nations would be a total and complete disaster… that’s not how you make a deal. Deals are made when parties come together…and they negotiate. Each side must give up something [of] …value in exchange for something that it requires. That’s what a deal is.”

Later in the campaign, as Trump earmarked his son-in-law, Jared Kushner, to lead the peace-making effort, he said: “I would love to be the one who made peace with Israel and the Palestinians. That would be such a great achievement.”

In the preliminary stages of his peace-making enterprise, the US administration was reported to have held discussions with Egypt, Saudi Arabia and Jordan about a “regional umbrella” to shield possible Israeli-Palestinian peace negotiations. Another important step towards getting a Middle East peace summit off the ground was Egyptian President Abdel Fattah al-Sisi’s visit to Riyadh on 23 April 2017, to bury the hatchet with Saudi King Salman. Among other burning issues, this visit was reported to have covered Trump’s aim to achieve an Arab-led Palestinian peace deal with Israel. Al-Sisi’s visit was to have significant consequences only a few months later, when Egypt allied itself with the Gulf states in demanding that Qatar renounce its support for Islamist extremists.

In mid-May 2017 Trump was himself in the Middle East, hosting a meeting in Riyadh with some 50 Arab leaders, and successfully regaining their confidence in the leadership role of the US, badly shaken during the Obama administration.

Trump’s insistent advice to them was to drive terrorism from their midst. Whether or not this was a precipitating factor, only two weeks later a conglomerate of Arab states led by Saudi Arabia and Egypt turned on Qatar. Breaking off diplomatic relations, and promising worse, they demanded that Qatar cease supporting Islamist extremism and its adherents, including Hamas, the Palestinian faction unyielding in its determination never to negotiate with or recognise Israel.

While the diplomatic stand-off dragged on, Trump pressed ahead. On 21 June 2017 his son-in-law and adviser, Jared Kushner, accompanied by US Mideast envoy Jason Greenblatt, arrived in the region to lay the groundwork for Trump’s “ultimate deal” – Israeli-Palestinian peace. Two days later Fox News reported that President Trump was considering calling a Camp David-style summit to renew his call to long-established US allies in the Arab world to confront the “crisis of Islamic extremism.”

“The president now wants to bring all the key players to Washington,” a senior White House official told Fox News. “They need to disavow groups like the [Muslim] Brotherhood for the stability of the Middle East at large. It’s not just about Qatari elements funding the Brotherhood but disavowing support for extremism in general.”

The pace began to quicken. On 10 July Israel and the PA signed a first-ever electricity deal under which the Israel Electric Company will supply electricity to the newly-constructed Palestinian substation outside Jenin, which has long suffered from power shortages. Three similar substations are planned for Ramallah, Nablus and Hebron by the end of 2018.

The next day Trump drafted the US ambassador to Israel, David Friedman, into the Kushner-Greenblatt task force for peace, and their first joint meeting with the Palestinian negotiating team, which included the PA’s chief negotiator, Saeb Erekat, was held that day in Jerusalem.

On 13 July Greenblatt announced that Israel and the Palestinians had reached an agreement for Israel to sell 33 million cubic meters of water to the PA each year to relieve the water situation in the territories. Water will start reaching the PA by the end of the year, long before the completion of the 5-year Red Sea–Dead Sea Canal project, of which this deal is part.

At the press conference which followed the water deal announcement, Greenblatt said that both the electricity and the water agreements were examples of “cooperation between Israel and the Palestinians that will lead to economic improvement in the lives of the Palestinians.”

It must have struck the journalists present that these developments could be the outward signs of some much broader initiative in the making, but Greenblatt refused to be drawn into discussing the wider implications, if any. The most he would say was that President Trump has “made clear that working toward a lasting peace agreement between Israel and the Palestinians is a top priority for him.”