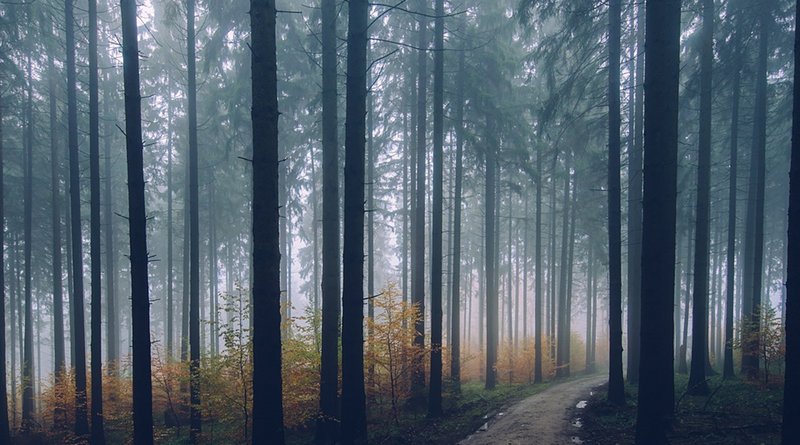 One nice, soft morning, the sun was up quicker than I thought so after a run, I decided to walk. There were silhouetted reflections on the dry road as soon as each breeze breathed so I was awash with fresh calm air that started to dry my wet shirt. The day was as smooth as morning water.

Overhead, the sky was blue, carrying big white cotton clouds reminiscent of a giant feather bed but on the horizon Cumulus cauliflower-like clouds threatened the afternoon. The leaves of the Alnus Japonica were in full form while the young pine trees’ fascicles were starting to clamber up.

The leaves of a pine tree are evergreen needles, which grow from the branches in bundles (fascicles). The number of needles in each bundle is a key to pine tree identification. For example, the Benguet pine (Pinus insularis) has needles of mostly three but in rare cases four to five. Spruce pine (Pinus glabra) which I observed in the US has needles in bundles of twos, while the eastern white pine (Pinus globrus) has bundles of five needles each emerging from its branches.

The needles differ in length and texture, with some long and rigid. Others, like our Benguet pine, soft but taut.

I walked the road leading to Longlong Communal Forest in La Trinidad, Philippines. I just passed a small orchard that had a half a dozen orange and coffee trees. Before the road forked, I entered the forest fringes and ran smack into highbush blueberry shrubs.

The blueberries to my left and were just entering full blossom and a wild strawberry in front of me was in full flower. There were perhaps fifty painted lady butterflies that have been attracted to the nectar, now in full swing, on the berry blossoms.

They danced from pink blossom to blossom, staying long enough to collect the sweet juice and unintentionally carrying pollen that will help to produce fruits. This yearly ritual is a perfect example of symbiosis between a plant an animal. The butterfly needs the nectar for survival, the berry needs the pollination for future generations.

There was a time before flowering plants when spore producing plants dominated the plant world. Some ferns, horsetails, and clubmoss plants were huge. These plants, known as allies, could reach tree size; some being hundreds of feet tall.

During the Carboniferous era, some 370 million years ago, these plants were the primary botanical residents on a very volatile Earth. This volatility helped to form their reproductive system that utilized spores that fell onto the soil. These spores grew into nonchlorophytic plants that developed beneath ground level.

It was these nonchlorophytic plants that bred and formed the green vascular plant that rooted itself in the earth and grew into this warm, even hot, carbon filled atmosphere. It is the remains of these plants from which we get our crude oil and gas reserves today. The advantage these plants had was the earthen buffer during their breeding cycle. Subterranean development of each new plant was a decided advantage in an era of volcanoes, earth quakes, and a heavy gaseous atmosphere.

About a hundred and fifty million years later flowering plants appeared. The atmosphere was much more settled; insects, mammals, and birds abound and dinosaurs rule but will completely disappear in the next five, or so, million years. The earth, as we know it today, has begun.

Codependent relationships between plants and animals continue to develop, ever so slowly, and the blueprint was set for what we have today.

All of these strange and overwhelming facts run through my head as I stared at the wild strawberry blossoms. I was witnessing nothing less than a miracle and I am awed that what seems so simple is the result of the most complicated series of events imaginable.

One recent change is the tremendous decline in honey bees. These imported bees ae our primary pollinators for the last fifty years but as I stand here I can see a few bumble bees, a few mason bees, and a few miner bees along with the painted lady butterfly working the nectar in the apple blossoms.

We are likely all aware that there has been a world wide bee colony collapse when it comes to the honey bee populations. It is a matter of grave concern for those in agriculture.

While it is true that many crops are wind pollinated, for instance almost everything in the grass family like corn, it is also true that many of our flowering crops are dependent on natural insect pollinators. Bee colony collapse has been going on for about ten years. It has been the subject of serious study.

Some of the planet’s best ecologists and entomologists have been dedicating their careers to solving this mystery and we still do not know the cause.

One major theory suggests that honey bees have lost their genetic diversity. This may have been caused by large bee breeders that took over the markets and lessened the genetic stock. Another theory blames the collapse on pesticides and herbicides.

One study within the pesticide theory suggests that bees are getting lost and not returning to their hive because the chemicals somehow impact their homing instincts and leave the bees in a state of confusion. There is no absolute proof of the cause of this terrible malady yet but it is very serious turn of events and should not be taken likely.

The fact is that for millions of years wild bees did all of the necessary pollination for the natural world. These creatures can do the job for at least some of our crops, unless of course, wild bees become effected by whatever is causing bee collapse as well.

New evidence points to this being a very real possibility. In Great Britain scientists have documented a strong decline in bumble bee populations, likely caused by insecticides.

I took a deep breath and looked around me. The blossoms, all pink and white, filled the air with a sweet aroma. Wild bees and butterflies flew from flower to flower in pursuit of their nectar. The sky was blue. The trees were all green. And the birds are were chirping. And at that precise point in time I was happy to appreciate the moment. Life is beautiful.

But I can’t stop wondering what the future holds for these plants that depend on insect pollinators for future generations.

Home » Walk In The Woods, Trees Will Teach You – OpEd