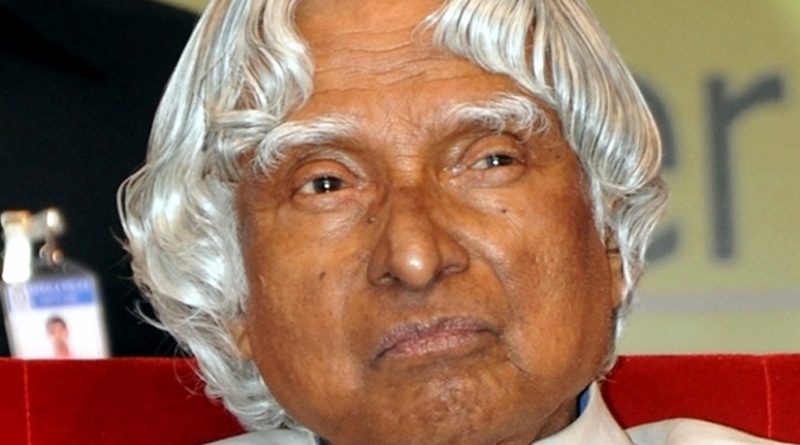 Dr. APJ Abdul Kalam, ex-president of India, died on July 27 of this year. Although I never had the privilege of meeting him personally but always admired him greatly. He was an extraordinary human being. He was a scientist, aeronautical engineer and writer who became the eleventh President of India, serving from 2002-2007. But above all his achievements, he was a very humble man, a great teacher and a splendid inspirer.

In spite of being a very spiritual Muslim who would often quote the 13th century Sufi Master Mowlana Rumi in his speeches, he became the most beloved president in the history of India whose population is mostly Hindu.

During his decorated 40-year scientific career, Dr. Kalam pioneered India’s space, missile and nuclear programs, earning him the nickname “Missile man of India”. Some of the posts he held include director of India’s first satellite launch vehicle, chief of the guided missile development program and chief scientific adviser to the Prime Minister. He catalyzed India in ways that no one was able to since the days of MK Gandhi.

Born 84 years ago in October 15, 1931 in Dhanushkodi, India, A.P.J. Abdul Kalam joined India’s defense department after graduating from the Madras Institute of Technology. He was a central figure in the development of the country’s nuclear capabilities, and was hailed as a national hero after a series of successful tests in 1998.

Despite his modest beginnings – his dad built and rented boats – Kalam was a bright student who showed promise in science and mathematics. He attended St. Joseph’s College, and went on to earn a degree in aeronautical engineering from the Madras Institute of Technology.

His hope of becoming a fighter pilot was dashed when he narrowly missed out on a spot with the Indian Air Force. Kalam instead joined the Defense Research and Development Organization (DRDO) as a senior scientific assistant in 1958. After moving to the newly formed Indian Space Research Organization (ISRO) in 1969, he was named project director of the SLV-III, the first satellite launch vehicle designed and produced on Indian soil.

Returning to the DRDO as director in 1982, Kalam implemented the Integrated Guided Missile Development Program. He then became the senior scientific adviser to India’s defense minister in 1992, a position he used to campaign for the development of nuclear tests.

Kalam was a key figure in the May 1998 Pokhran-II tests, in which five nuclear devices were detonated in the Rajasthan Desert. Although the tests resulted in condemnation and economic sanctions from other world powers, Kalam was hailed as a national hero for his stanch defense of the country’s security.

Throughout his career as a scientist, one of Dr. Kalam’s goals was to inspire and motivate the youth of India to get excited about science and knowledge. For instance, after his position as chief scientific adviser ended in 1999, Dr. Kalam announced he would personally meet at least 100,000 students in a two year period to help spread the word of science.

As a President, Dr. Kalam was different and disregarding his customary ceremonial role, he worked hard to reach out to the youth of India and inspire them. Known as the People’s President, Dr. Kalam set a goal of conducting 500,000 one-on-one meetings with young people over the course of his five-year term. [I doubt if there is a single head of state alive today that even met a tenth of those numbers in his/her entire career.] His immense popularity led to him being nominated by MTV for a Youth Icon of the Year award in 2003 and 2006.

After leaving office in 2007, Dr. Kalam became a visiting professor at several universities. He formed the “What Can I Give Movement” in 2011 with the goal of creating a compassionate society, and in 2012, his efforts to improve healthcare led to the release of a tablet for medical personnel to use in remote areas. Never married, he lived a very simple life who would be waiting patiently for a bus, having breakfast at his favorite teashop, talking to people from backgrounds as humble as that which he had outgrown. In this simplicity lay the secret of his ability to connect with people, across the boundaries of age, class, religion and region.

On July 27, 2015, Dr. Kalam suffered a massive heart attack while lecturing at the Indian Institute of Management, Shillong and subsequently died at the age of 83.

Dr. Kalam was a deeply spiritual man who practiced what he preached, shunning material possessions and rewards. The only material goods Dr. Kalam coveted were books, owning over 2500 of them. His only other possessions were a watch, six shirts, four pants, three suits and a pair of shoes. He did not own any property, a fridge, TV, car or air conditioner.

According to his former media advisor, “He [Dr. Kalam] would never accept a gift, save a book, and whenever somebody brought him a packed gift and tried to pass it off as a book, he insisted on examining what was inside. Anything other than the book was politely returned.”

Dr. Kalam was laid to rest on July 30 with full state honors in his native Tamil Nadu. Over 350,000 people attended his funeral in his home town of Rameswaram.

In honor of the scientist and former president, the southeast Indian state government of Tamil Nadu created a “Dr. A.P.J. Abdul Kalam Award,” which recognizes exceptional individuals who promote the sciences, students and humanities. The government has also established Dr. Kalam’s birthday (October 15) as “Youth Renaissance Day.” Discussion about building a large-scale memorial at his burial site is underway.

Wheeler Island – located off the coast of Odisha, which is one of India’s key missile testing facilities, will be named after President APJ Abdul Kalam. Odisha Chief Minister Naveen Patnaik announced the move on Monday joining a league of state governments who have taken to honor Dr Kalam, considered the father of India’s missile program and a widely loved public figure. Fondly remembered as the ‘People’s President’, his death was mourned widely. The government of Delhi announced it would rename a key road at the heart of the capital city after the former President last week while the Bihar government named an agriculture college after him.

Among his many accolades, including honorary doctorates from 40 universities, he was granted the Padma Bhushan (1981), the Padma Vibhushan (1990) and the Bharat Ratna (1997) — India’s highest civilian awards — for his contributions in modernizing government defense technology. He also wrote several books, including the autobiography Wings of Fire in 1999.

Dr Kalam was a very wise man whose worth is difficult to measure by anyone. To Shashi Tharoor, probably India’s best known diplomat, Dr. Kalam “was a complete Indian, an embodiment of the eclecticism of India’s heritage of diversity.” “In his life and his work, APJ Abdul Kalam embodied the best of what India can be. India has never had a more beloved president. Active till the end, he left the world in mid-speech, as if to remind us that he still had something more to say.”

Here below are 37 quotations from him that I found worth sharing.

How did Dr. Kalam sum up himself? In his book ‘Wings of Fire’, he wrote, “My story—the story of the son of Jainulabdeen, who lived for over a hundred years on Mosque Street in Rameswaram island and died there; the story of a lad who sold newspapers to help his brother; the story of a pupil reared by Sivasubramania Iyer and Iyadurai Solomon; the story of a student taught by teachers like Pandalai; the story of an engineer spotted by MGK Menon and groomed by the legendary Prof. Sarabhai; the story of a scientist tested by failures and setbacks; the story of a leader supported by a large team of brilliant and dedicated professionals. This story will end with me, for I have no belongings in the worldly sense. I have acquired nothing, built nothing, possess nothing—no family, sons, daughters.”

But I am sure Dr. Kalam’s story will not end with his burial in a Muslim grave in Tamil Nadu but would continue to be told and retold because he was able to ignite the minds of so many – tens of millions not just in India but all over the globe. His indomitable spirit will live along with us and continue to inspire the generations to come. May Allah have mercy on him!