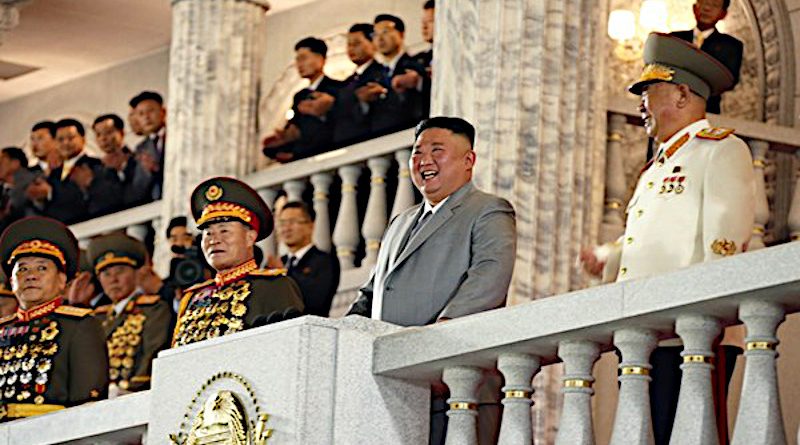 Saturday’s rare nighttime military parade celebrating the 75th anniversary of the Workers’ Party of Korea, the country’s ruling party, was a spectacle to behold for North Korea and viewers around the world. Pyongyang wanted to show its strength and place in the world. Ruler Kim Jung Un wore a Western-style suit as he gave a potent Juche-filled speech, including a moment of tears, to an adoring flag-waving audience. Neither the coronavirus disease pandemic nor flooding from typhoons could stop the parade from going ahead. In fact, these occurrences played a central role in Kim’s speech about North Korea’s ability to prosper.

After Kim’s heartfelt speech commemorating the country’s growth, one of its largest ever military parades was held, showing off an arsenal of conventional weapons and personnel. All of North Korea’s new weapons followed the country’s known list of priorities: Nuclear missiles, rocket artillery, tank killers, and tanks. The parade did not disappoint in terms of hardware and its implications.

Missiles are the biggest new development in two categories: A submarine-launched ballistic missile (SLBM) and an intercontinental ballistic missile (ICBM). The new SLBM is the Pukguksong-4A, which joins the 2 and 3 variants in this class. Based on calculations, the missile may have the possibility to be launched from a sea platform, traveling as far as Japan or the US bases on Guam. But there is a major technical issue: Nobody has seen this missile fly, so all estimates are hypothetical.

The new ICBM displayed during the military parade, the Hwasong-16, was all about magnitude because, for Kim and his planners, size matters. The black-and-white-tipped missile sat on a lumbering 11×11 axle wheeled vehicle. By comparison, the older Hwasong-15 ICBM is carried on a 9×9 vehicle.

Hypothetically, the Hwasong-16 is calculated in terms of range and its potential to deliver multiple independently targetable re-entry vehicles (MIRVs). An MIRV-equipped missile can carry several nuclear warheads, each capable of striking a different target across a geographical stretch of land. The idea is for North Korea’s nuclear-tipped MIRVs to overwhelm ballistic missile defenses after launch and in the descending phase.

On paper, North Korea’s existing missiles carry just one nuclear warhead.
The US’ prevailing counter-strategy uses Ground-based Midcourse Defense (GMD) interceptor systems based in Alaska and California, which are designed to shoot down incoming North Korean warheads. Here, in theory, is where things get sticky and problematic. America’s GMD only has a 50 percent kill rate, meaning the system requires the launch of four to five interceptors to shoot down a single incoming warhead, at least in theory.

Defense would thus become more complicated as additional interceptor systems would need to be located along the western US, including Hawaii. I should again emphasize that these numbers are theoretical as the Hwasong-16 has never had a test flight based on its throw-weight or shown that it has MIRV capability. But Pyongyang has demonstrated its distance capacity by launching vehicles into space.

There is no doubt that MIRV technology is fairly advanced, but North Korea’s ability to move quickly toward a workable MIRV with delivery is unlikely given the technical requirements. It is doubtful that an outside power would risk giving Pyongyang the technical knowhow unless in a form of alliance. What we do have here is a theoretical missile with the capability of striking almost the entire continental US. North Korea’s intent during the 75th anniversary parade was to intimidate regional neighbors and the world at large. For many, it worked.

With America’s presidential election coming next month, the parade’s occurrence is timely. North Korea has held similar parades before, but never one quite like this celebration. However, it is for good reason: North Korea has survived an onslaught of challenges and demonstrated its wherewithal to persevere. Kim’s wearing of a suit is telling because his appearance as a true world leader is important to his worldview. The North Korean leader, whose sister remains in the wings to carry on the family tradition, is showing his prowess as Donald Trump and Joe Biden head into the election.

It is likely that Kim will want to demonstrate his country’s capabilities to America and the world between the US election and the presidential inauguration in January. Many of America’s enemies will try to do the same. Any election confusion benefits Kim’s strategy around the Pacific Rim.

GDP grew at a record 33.1 percent annual rate, as the economy bounced back from the pandemic-driven shutdowns in the