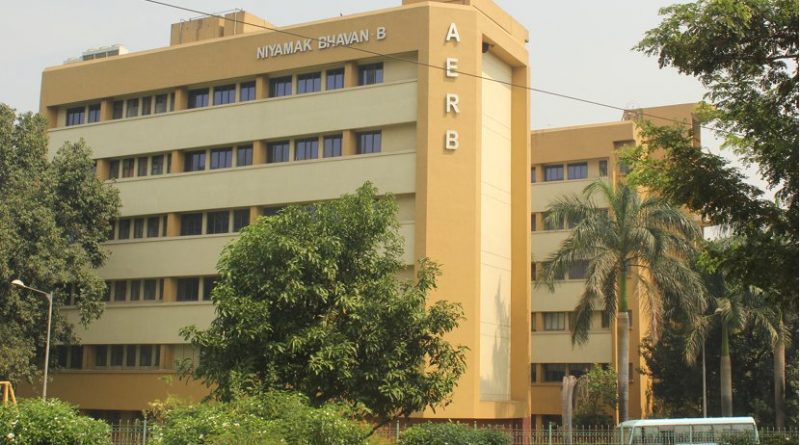 Pioneers recall that when India’s Department of Atomic Energy (DAE) started the design and construction of its first research reactor Apsara in 1955, there was no formal safety analysis report. Designers of various systems of the reactor on their own ensured the safety of the design. I hasten to add that it was the case all over the world. A robust regulatory system in which many specialists from different disciplines participated evolved soon. (One can read the history of the regulatory activities in the field of nuclear energy and its applications from here, here, here and here)

The promulgation of Atomic Energy Act 1962 and the Radiation Protection Rules, 1971 gave the initial legal framework to safety.

With the setting up of the Atomic Energy Regulatory Board on November 15, 1983, the enforcement of safety regulations in the DAE and non-DAE installations became more formal. The notification succinctly spelt out the Board’s regulatory role. While celebrating AERB’s “birth day” let us look back to AERB’s activities and look forward to the challenges facing it.

At the very outset, I have to declare a conflict of interest. I was one among the first handful of officers who joined the Board from Bhabha Atomic Research Centre (BARC) and was the Secretary of the Board from August 1987 to January 2004. I strongly defend the turf. I also try to give references to authentic documents to buttress my views. (One can get a bird’s eye view of the regulatory activities of AERB during its formative years here)

From a fledgling organization with a handful of members occupying two rooms at the Old Yacht Club, opposite Gate way India, Mumbai, AERB grew into a strong regulatory agency with a total staff strength of 346, over 250 of them Group A officers. Of them, 21 have Ph.D. degrees. All of them had special training in one or more of the subjects such as nuclear engineering, radiation safety, medical physics etc. All of them are graduates or postgraduates; many of them have M.Tech degrees from IITs. Five or six of them secured law degrees and they reinforce the legal cell of AERB.

AERB appointed special committees to review safety features of Indian nuclear power plants in light of accidents at Chernobyl and Fukushima. AERB secretariat diligently followed up the recommendations of these committees.

The setting up of procedures for speedy and effective safety review and licensing of the standardized Indian version of pressurized heavy water (PHWR) from Narora onwards is not a mean achievement. One of the criticisms AERB faced initially was about the lack of experts from outside the DAE family in its committees. AERB faced these challenges and inducted many specialists wherever available from outside the DAE family into its committees.

Some Past Regulatory Actions

Has AERB exercised its powers? AERB’s Annual report contains the regulatory actions taken by the Board. I recall that the first question a journalist asked me was whether AERB has any teeth! AERB was just born then. If an infant has teeth when born, it will be a freak I joked. Actually, the question inspired us to review the Atomic Energy Act 1962. When the Controller and Auditor General of India made an incorrect interpretation of certain provisions in the Atomic Energy Act we could easily identify it. (Please see here)

In 1993, someone stole three radioactive sources from the premises of a foreign company based in India, and engaged by Oil & Natural Gas Commission (ONGC) for oil well-logging operations. AERB ordered suspension of all its well logging operations using radioactive sources in India. Eventually based on the inputs from police, AERB’s team recovered the sources from Coovum River within the Chennai city limits. AERB permitted the use of sources after ONGC reinforced more measures to ensure security of the sources. The disgruntled workers involved got jail terms

AERB ordered the withdrawal of radium sources from hospitals as many of them were leaky or prone to develop leakage and were hazardous. A repeat message followed.

Removal of radium led to the introduction of safer substitutes in cancer treatment, improved dosimetry, and better radiation protection.

On April 6, 1995, AERB barred a cancer hospital in Delhi from treating new patients because of safety violations. The Board lifted the ban when the hospital fulfilled the safety requirements.

In 1987, AERB prescribed permissible limits for radionuclides in foodstuffs when there was a possibility of the import of contaminated foodstuffs after the Chernobyl accident. One can get related details here.

The Mayapuri radiation accident, which led to the death of one person and radiation injury to many, offered a wakeup call. AERB implemented stricter measures immediately.

In 2012, the Controller and Auditor General of India (CAG) gave a critical report on AERB. Some reports criticized the CAG report (please see here, here and here). While noting in a lighter mood, that Accountants are seldom pleasant, we must admit that the appraisal of CAG offered an invaluable wake up call to AERB. The Parliament’s Public Accounts Committee endorsed CAG recommendations.

As directed by CAG, AERB prepared a policy document. Through e-LORA, it implemented an on line program for all its licensing activities. It issued over 160 safety documents. Anyone can download them freely from AERB web site. CAG’s proposal to make AERB’ legal framework stronger is pending with the Ministry which hopefully may accord priority to it. Closer perusal of AERB’s Annual report shows that AERB strengthened all regulatory activities as directed by CAG.

The International Atomic Energy Agency carried out Integrated Regulatory Review Service (IRRS) mission during March 16-27, 2015. India is among the few countries, which published the report.

AERB’s Annual report, which summarizes AERB activities during 2015-2016, is here.

We cannot defend even a single fatality at work place due to any reason. Unfortunately, they do occur and every Annual report describes a few. Conventional reviews and regulatory restrictions ordering temporary stoppage of work appear to be not effective. AERB must implement some out of the box methods to prevent fatalities totally.

AERB publishes safety-related details such as radiation dose to workers and radiation dose to members of the public etc. Data are available for many years for every nuclear power station show that these doses are insignificant compared to the limits prescribed by AERB. They are low and are indistinguishable from background radiation present any where even in the absence of the plant

Another notable development is the setting up of AERB’s Safety Research Institute at Kalpakkam. This writer recalls that the idea to set up the institute came up in a routine discussion. A series of positive developments, which included the arrival of the right type of individuals at the right time, accelerated the process.

During 2000-2014, SRI scientists published 50 papers in peer reviewed international journals, presented 93 papers in National and International Conferences and wrote 164 internal reports
AERB/SRI has set up a Compartment Fire Test Facility (CFTF) to carry out a comprehensive research program on fire safety. SRI scientists use this facility to carry out basic research in enclosure fires, to investigate mitigation methodologies & techniques, and to provide inputs for regulatory activities in the area of fire safety.

Effective regulatory control of medical x-ray units in India is a daunting task, as medical x-ray use grew in an unbridled way nationwide for many decades.

AERB’s efforts to decentralize regulatory control by authorizing State Governments to enforce radiation safety were only partly successful. While Kerala and Mizoram set up their agencies, other MOUs with 13 states did not see much progress

There is some light at the end of the tunnel, as AERB developed and deployed its e-governance initiative for e- Licensing of Radiation Applications ‘e-LORA’ under which over 35,000 X-ray units got recorded in the system and 23,500 Units got registered as on March 31, 2017. AERB extended e-LORA successfully to other areas as well. AERB received the “SKOCH Smart Governance Award -2015” for e-LORA.

AERB issued an advisory to medical/dental x-ray owners and the general public against indiscriminate use of dental x-ray examinations solely for the purpose of non-diagnostic applications such as age determination or birth registration.

AERB’s website (www.aerb.gov.in) contains information for everyone. AERB is looking forward to future challenges with renewed vigour, commitment and enthusiasm. The mood is upbeat in AERB.