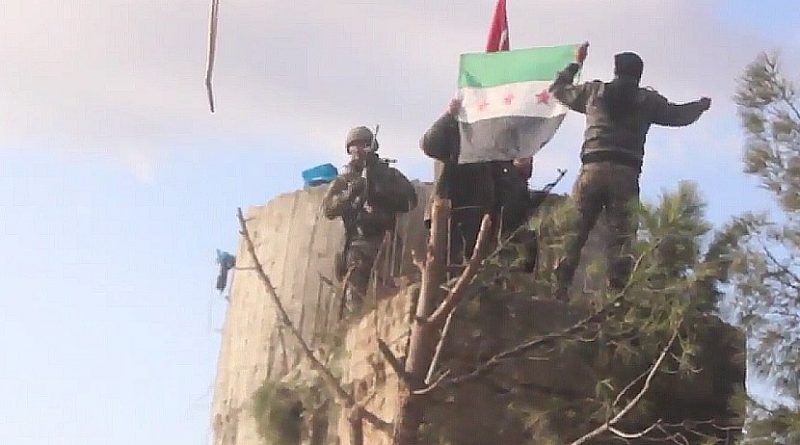 Although ISIL has been hit hard in recent months and lost substantial ground in Syria and Iraq, Turkey has become increasingly concerned with Syrian Kurdish militias it identifies as Turkey’s primary national security threat. Turkey has long criticized the U.S. policy of arming and training Kurdish militias and President Erdogan recently raised the stakes by saying Washington is fomenting terrorism along Turkish borders while Istanbul is denied defense cooperation in the form of drones and weapons it has been requesting.

Turkey hopes its military operations are swift in displacing and rolling back Syrian Kurdish militias but any success here is only tactical at best. Although unlikely, the threat of a prolonged campaign and casualties for the Turkish Armed Forces will only harden nationalist sentiments in Turkey and potentially embolden Ankara into taking more aggressive steps inside Syria.

In any case, the latest Turkish intervention into Syria – which Ankara may see and portray as a last resort – nonetheless strains its relationships with several partners and stakeholders, including the U.S. and even Russia. However, U.S.-Turkish tensions are strategically desirable for Moscow as neither Washington nor Istanbul can effectively pursue their strategic interests in Syria without the support of the other. Nonetheless, Turkish intervention in rolling back U.S.-backed Syrian Kurdish groups potentially jeopardizes future U.S. influence and credibility as a consequence, which is helpful to broader Russian goals.

Moscow understands that the Kurdish threat for Turkey is a red line beyond negotiation – and not accommodating Ankara at this stage of the conflict can complicate Russia’s own efforts especially as its military operations progress deep into a “draw down” phase. After all, as James Jeffrey, a former U.S. Ambassador to Turkey and Iraq, recently testified before the Senate Armed Services Committee, around a third of Syria is effectively controlled between the U.S. and Turkey – with Turks being crucial to enabling American access to Syria.

The U.S. has been less sensitive to Turkish concerns over its policy in Syria with regards to supporting Syrian Kurds – providing NATO-member Turkey a compelling rationale to cooperate more closely with Russia. The U.S. has nurtured close ties with Syrian Kurdish militias to fight ISIL over the past two years, infuriating Turkey in the process. However, wary of supporting religiously-inspired Sunni Arab rebel groups, even relatively moderate types that oppose Al Qaeda and ISIL affiliates, and short of alternative partners, the U.S. looked towards working with Syrian Kurdish militias as a way of staying relevant in the Syrian theatre and in any future peace process.

It is believed that a U.S. announcement, later retracted, to arm and finance a Kurdish “border force” hastened the Turkish intervention into Afrin with Operation Olive Branch. Russia later blamed U.S. unilateralism for forcing the latest Turkish intervention, which Moscow reluctantly tolerated but could not be seen to endorse.

Moving forwards, the capture of Afrin by the FSA from Syrian Kurdish militias could prove a coup for Turkey – situated in Aleppo Governorate, Syria’s most populous province, Afrin also provides a gateway to the city of Idlib largely under FSA control but contested by Syrian government forces. Turkey is focused most seriously on these northern areas of Syria – where the FSA is strongest and where a significant Turkmen also resides – to reshape the local balance of power between warring factions in favor of pro-Turkey groups.

There have been rumors and conspiracy theories for months that the Russians, Turks, and Iranians have agreed on a de facto partitioning of Syria. While the “Balkanization” of Syria is far from a foregone conclusion or endgame, the latest Turkish intervention could well be part of a loosely coordinated, quid-pro-quid Turkish-Russian-Iranian effort to reorient the war-torn Syrian theatre in preparation for future political peace talks.

It was inevitable that the U.S. would eventually be forced to decide between Turkey or Syrian Kurds as its main ally or driver of its somewhat paradoxical Syria policy but the current Turkish operations have swung much momentum back into its favor. On January 27, Turkish media reported U.S. National Security Advisor H.R. McMaster confirming that the U.S. was ending weapons transfers to the YPG in what would amount to a major policy change. However, U.S. forces are holding the city of Manjib, also in Aleppo Province, which was retaken from ISIL in 2016 by Syrian Kurdish militias and has since become one of their safest operating camps.

As such, beyond the tactical fluidity in Syria it remains a largely gridlocked theatre at the strategic level. Moreover, as none of the four major external players in Syria – Russia, Iran, Turkey and the United States – have completely aligned or completely divergent agendas either among themselves or with the Assad government, any cooperation will continue to come in short bursts, be highly transactional and remain sharp-edged.

Home » Power Play In Syria: What Turkish Moves Mean For US And Russia – Analysis