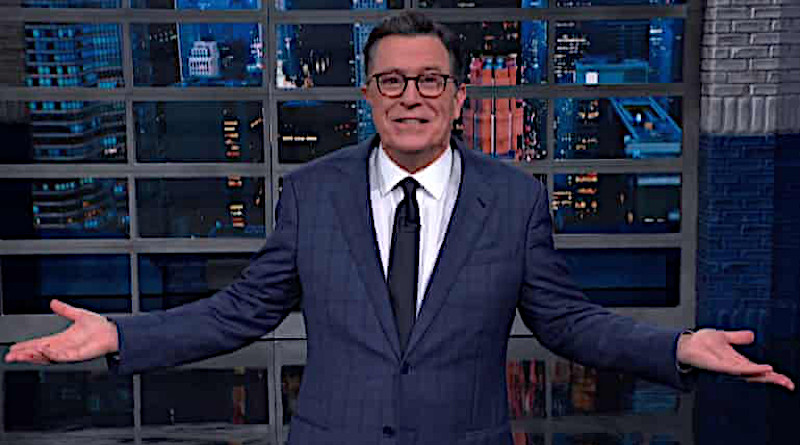 Stephen Colbert regularly has a go at Donald Trump on his show. (Screengrab YouTube)

Normally, at times of great national stress, US political foes and opponents come together to form a united front. After Pearl Harbor, a politically divided America came together as one to fight the Axis powers. The same happened during the Korean War. The Vietnam War was more divisive, but this was driven largely by a disparity between young and old, rather than politics. The war to force Iraq out of Kuwait united the country. And the terrorism of Sept. 11, 2001, brought everyone together so much so that many were silent when President George W. Bush wrongly used the Al-Qaeda threat to justify his invasion of Iraq two years later.

But I have never experienced the anger that has divided America since the election of Donald Trump as president. Trump was never a politician and is still unconventional when it comes to politics. Most politicians tend to want people to come together, understanding that consensus is a form of compromise in which everyone gets something of what they want. Using Twitter as a powerful soapbox probably doesn’t help either, considering that tweets are restricted to only 240 characters, or maybe about 35 words. Most major issues require 10,000 words to properly explain.

There is a war going on in the US, but it is not about terrorism or even the coronavirus disease (COVID-19) that has taken more than 26,000 American lives since it was first diagnosed as coming ashore from Wuhan, China, to Seattle in mid-January. It is a war that has not only divided the politicians, but also the media and the people.

Some people blame it on social media, where anyone can quickly express their anger and vitriol without giving it a second thought. It has made it difficult to watch late-night television entertainment shows, with the likes of “The Late Show with Steven Colbert” and “The Tonight Show Starring Jimmy Kimmel” being filled with animosity, political attacks and humor driven by the humiliation of Trump. Colbert and Kimmel claim they are only doing what others have done in the past, but that’s not necessarily true. Johnny Carson, the king of late-night TV, never wrapped his opinions in vicious personal insults. He was always clever and witty. Colbert and Kimmel are not.

Even the news has become far less objective. That may come from the fact that far fewer Americans are receiving the news the way they used to, which is a result of the way its delivery has changed in the US.

As a child, my father subscribed to five different newspapers. Sunday was considered “newspaper morning.” The Sunday papers were thick and like compelling novels that you just couldn’t put down. They were filled with detailed information that challenged the reader’s mind and expanded their knowledge of the entire world, from Chicago to Jerusalem and Riyadh. Today, print newspapers are rarely seen and gone are the days of basking in the brilliance of their writing on Sunday mornings.

Instead, people scream on social media platforms like Facebook and Twitter, where incomprehensible thoughts are delivered in a new anger-filled jargon. Online search engines like Google, Yahoo and Bing are filled with links to stories, but to read them you have to subscribe to dozens of newspapers’ websites. As a result, many Americans simply go to the free sites; the ones that can’t afford professional journalists so instead fill their site with inexperienced bloggers whose emotions are far stronger than their journalistic credentials.

Every day, Illinois Governor J. B. Pritzker holds a lengthy press briefing, which he usually begins with a diatribe against Trump and the federal government for not doing enough to prevent the coronavirus from spreading or providing enough medical supplies to his state. Pritzker is a Democrat and Trump is a Republican and such political sniping is echoed throughout the country by Democratic governors, while Republicans snipe back with the president’s responses.

For everyday Americans, who have to get up every morning and work hard to put food on the table, including during extraordinary times like this, the vitriolic back-and-forth is disappointing. So much more could be done if people set aside their politics and worked together. COVID-19 is a virus, not a military invasion, yet it has become the backdrop for a damaging war of words.

Division weakens our ability to defeat the threats that face us. Worse, it pushes the public to focus more on the political divisions than on the need to follow public health procedures.

In history class, as a child, I remember studying the US Declaration of Independence and the words of one of its most sagacious signatories, Founder Father Benjamin Franklin. Franklin declared when signing the historic document: “We must all hang together or, most assuredly, we shall all hang separately.”

The concept of coming together to confront adversity isn’t, of course, an American invention. There is an Arab proverb that has been repeated over the centuries by many, which basically says the same thing: “A house divided cannot stand.”

America is divided. What will happen if that doesn’t change?