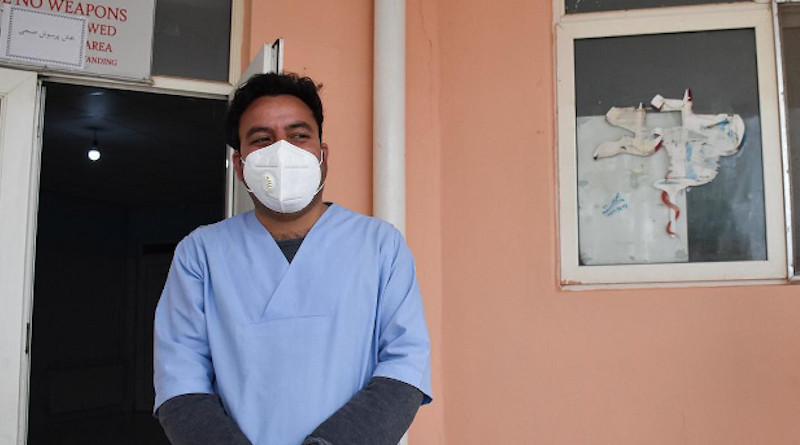 Afghanistan, in the coming days, is projected to have one of the worst Covid-19 infection rates in the world. As the government attempts to deal with the pandemic with its overstretched health sector, the Taliban seem to be exploiting this opportunity to win the ‘hearts and minds’ of the Afghans. On one front, the group has continued to carry out incessant attacks on civilians and on the other, it is amenable to let healthcare workers provide services in areas under its control. As the situation worsens, the Taliban are likely to use this space to improve their bargaining strategy and acceptability not only with the Afghans but also with the international community.

Afghanistan is presently fighting a two-front war—against the scourge of terrorism and the Covid-19 pandemic. In the face of rising violence and limited testing capabilities, the number of infections has risen sharply to 8065 with 179 deaths (as on 19 May 2020).[1] The International Organization for Migration, in the first week of May, projected that the country could be on its way to have one of the highest Covid-19 infections in the world. The projection was made after results of a randomized sample of 500 people in Kabul, which so far has been the worst affected[2], showed an alarming infection rate of 50 percent. Cases of infections have been reported from all the 34 provinces of the country. As this crisis stretches the capacity of the health sector in the country, lethal insurgent attacks have not provided the citizens any respite. Both the Taliban as well as the Islamic State have been relentless in their attacks on civilian facilities. Targets, in the recent past, have included a maternity hospital in Kabul and funeral gathering in Jalalabad, as well as security forces. This has posed a serious challenge for the Afghan government and US-Taliban peace deal.

By all means, the worst is yet to come. But fears have already been expressed that the Covid-19 pandemic may prove to be a more dangerous killer than the 18 years of war. The country’s health sector is in shambles. According to the National Statistics and Information Authority, there are only 536 hospitals with approximately 15,000 beds and roughly three doctors for every 10,000 patients in the entire country. The Afghan Ministry of Public Health said on 7 April that that there are only 300 ventilators in the whole country. Testing kits are in short supply and the hundreds of infected refugees returning from Iran to all provinces of the country have added to the crisis. Provinces sharing border with Iran such as Herat are projected as the hotspots. Government’s ability to conduct extensive testing and its appeal for self-quarantine has been largely unsuccessful. Till 5 April, the government was not even successful in closing the mosques. Without external assistance, there is no way that Afghanistan will be able to meet the challenge.

Battle for ‘Hearts and Minds’

The pandemic is being actively used by the insurgents to win the ‘hearts and minds’ of the populace. Amidst spiraling cases and concerns of the spread of the virus, the Taliban are taking steps to gain acceptability among the Afghans and the international community. Unlike other global jihadist groups like the Islamic State and the al Qaeda, who are using the opportunity to scale up attacks and recruitment by using the narrative of the present pandemic as ‘divine retribution’, the Taliban have launched a public-health awareness campaign in the Logar and Nangarhar in the east; and Herat and Jawzjan provinces in the east. According to media reports, Taliban teams have spoken to people of the region of the benefits of washing hand with detergent and have distributed pamphlets, hand sanitizers, and masks among them.

Taliban spokesperson Zabihullah Mujahid told media, “The spread of Covid-19 is an important issue for us. We have taken all measures to fight against it as strong as possible, and we also have a structured plan.” He said Taliban fighters are traveling to remote villages via motorcycles to distribute leaflets, soap bars, and hand sanitizer. Another Taliban commander also spoke of not allowing the virus to gain control of ‘our country’. The group’s ‘General Commission for Public Health’ has listed precautions that people should take, including regular prayers, eating “halal” as well as medical advice. In some villages, media has reported, people have even been provided with a list of vegetables that contain high amounts of vitamin C to boost immunity. In the provinces where the Taliban have shadow governments, new directors of Public Health have been appointed by the group. The group has even accessed testing kits from undisclosed sources, which is apparently in short supply in the government.

A part of the reason for the Taliban’s activism could be due to the fact that its own cadres have been infected by the virus. In the absence of proactive measures, the infections could simply grow and impact the group’s fighting capacities. According to a media report in April, the Médecins Sans Frontières reported 125 positive cases of infection in Taliban’s different ranks in six provinces (Paktiya, Badghis, Ghazni, Helmand, Wardak and Baghlan) within a time span of 72 hours. Out of 472 suspected samples, 31 positive cases were registered in Paktiya, 40 in Badghis, 17 in Ghazni, 13 in Helmand, 9 in Wardak and 15 in Baghlan provinces. Following this revelation, the Taliban stopped the MSF from testing more samples in the regions under their control, the report said.

Nevertheless, the Taliban strategies are also geared towards gaining wider acceptability. The group has been spoken of its willingness to announce ceasefire in areas that have been affected by an outbreak of the virus. In September 2019, the group had lifted a ban on the World Health Organisation (WHO) and the Red Cross on certain conditions. In a statement in March 2020, it promised safe passage to international healthcare organisations and humanitarian workers fighting the pandemic. The group even urged health agencies to provide medicine, send aid and the necessary equipment to areas under their control. However, with regard to house-to-house vaccination for other diseases like Polio, a blanket ban by the Taliban has not been relaxed.

The Taliban has allowed NGOs approved by the government access to its territory where they are able to deliver the healthcare assistance the government cannot. The group is in fact asking the refugees returning from Iran to avail the testing facility provided by the government hospitals, quarantine themselves for 14 days, and have even provided ambulances to ferry the patients. On occasions, they have quarantined infected persons and have detained returnees from Iran who escaped from government-run quarantine facilities. The government departments, in turn, are appreciative of such gestures and have welcomed whatever assistance they can get from the insurgents in terms of raising awareness of the people regarding the virus.[3] This has led some to predict that the pandemic can help build trust between the two warring sides. The Human Rights Watch has opined that both the government and the insurgents should ‘work together with the UN and humanitarian agencies to ensure that aid reaches the whole country, or a dire situation will become catastrophic.’[4]

However, such gestures by the Taliban could merely be directed at gaining publicity, some sort of legitimacy and winning the ‘hearts and minds’ of the common Afghans vis-à-vis the government. This is clear from the fact that the Taliban have refused to accede to an appeal for a ceasefire by President Ghani, with its spokesperson Suhail Shaheen terming it neither ‘rational nor convincing.’ The group has promised to declare ceasefire only if areas it controls ‘are hit by a coronavirus outbreak’.

The group is suspected to be behind the gruesome attack on civilians and subsequently on a military base in Gardez that killed five civilians and wounded 19 people including five Afghan National Army (ANA) personnel. This has forced the government to order the launch an offensive against the Taliban and suspend release of Taliban prisoners, a move that has been decried by the Russia’s presidential envoy as detrimental to the ongoing peace process.

According to a field report, on 16 May 2020, Taliban cadres have been ordered by the group’s leadership to carry out widespread attacks on Afghan civil and military installations and deny their role in case of any civilian casualty. The decision was taken in a meeting chaired by Mullah Yaqoob (son of Mullah Omar), who is the military chief of the group at Akora Khattak in Peshawar. The meeting was attended by representatives from both the Quetta and Peshawar shuras. The overall strategy of the group is to capture three provinces before start of the intra-Afghan talks, which will exert maximum pressure on the Afghan government.

This indicates that, in the days to come, intense fighting will continue between the government forces and the insurgents even as the country grapples with how to deal with the pandemic. Former Chief Executive of Afghanistan, Dr. Abdullah had once remarked that the money Afghanistan spends in a day’s war with the insurgents is enough to build a modern hospital.[5] The incessant fight bleeds the country’s economy, leaving it with little option but to continue dependence on international assistance. Seeking a way out of this permanent state of war has not been easy. The recently concluded deal between the U.S. and the Taliban is stuck in a limbo due to a variety of reasons that includes distrust between the government and the insurgents; prisoner release; and the lack of progress in initiating an intra-Afghan dialogue.

The Covid-19 pandemic could not have come at a worse time for Afghanistan. It will add to the pressure and limited capacity of the Afghan health sector and service delivery mechanism, thereby impinging on the credibility of the Afghan state. At the same time, the Taliban measures to elicit acceptability may boost its bargaining potential. The U.S., which is largely seen as bolting to the door, may further pressure the Afghan government to move ahead with the peace process with the insurgents, in the lines as envisaged in the U.S.-Taliban deal.

Source: This article appeared at Mantraya

[2] According to the Ministry of Public Health, Kabul, followed by Herat, Kandahar and Balkh are the worst affected provinces in the country. However, it could also be due to the samples collected in these provinces are higher than the other provinces. MoPH Datawarehouse Dashboard, https://moph-dw.gov.af/dhis-web-dashboard/#/. Accessed on 19 May 2020.

[3] An adviser to the Ministry of Public Health told the media, “We noticed photos circulating on social media that show the Taliban’s campaign, and regardless of their intention, we appreciate the cooperation from anyone or any group that supports the fight against coronavirus.”

Home » Afghanistan’s War On COVID-19: Politics Of The Pandemic – Analysis