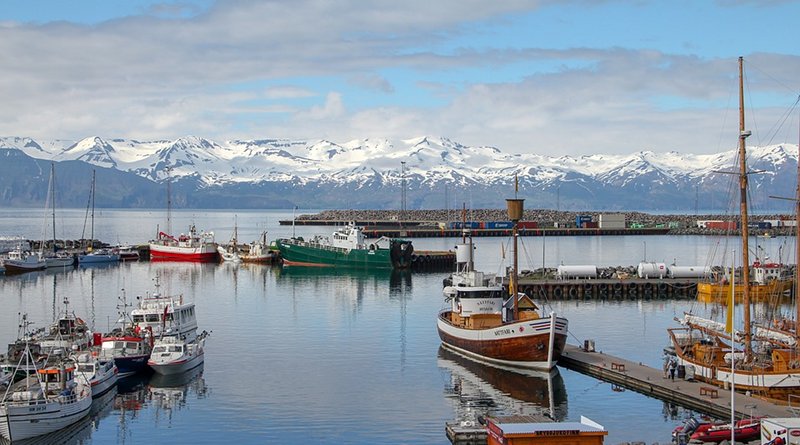 It was widely believed that the U.S. military left Iceland in 2006 when they abandoned the base adjoining Iceland’s international airport at Keflavik on the southwest tip of the island.

But recent developments, in particular the visit of U.S. Vice-President Mike Pence to Iceland in early September and perhaps a previous visit of U.S. Secretary of State Mike Pompeo in February 2019, reveal other motives.

Pompeo discussed security issues while in Iceland, and on Iceland’s national day, June 17, issued a statement that “Iceland is also a steadfast NATO ally” and  “We thank Iceland for its assistance with the Resolute Support Mission in Afghanistan and the Coalition to Defeat ISIS.”

Prior to Pence’s visit, a B2 stealth bomber capable of carrying nuclear weapons had come to Iceland. A press release issued by the ‘United States Air Forces in Europe – Air Forces Africa’ on August 2019 stated: “The use of strategic bombers in Iceland helps exercise Naval Air Station Keflavik as a forward location for the B-2, ensuring that it is engaged, postured and ready with credible force to assure, deter and defend the U.S. and its allies in an increasingly complex security environment.”

The bomber was ostensibly in Iceland to practise “hot-pit refuelling”, a term used for the practice of refuelling planes without shutting off the engines.

Iceland’s National Security Policy, formulated in 2016, states that it will “ensure that Iceland and its territorial waters are declared free from nuclear weapons, subject to Iceland’s international commitments, with the aim of promoting disarmament and peace on Iceland’s part”.

During a meeting with Iceland’s Foreign Minister Gudlaugur Thor Thordarson, Pence said that the United States is very determined to strengthen Iceland’s defence and ensure safety, and that the security area at Keflavik is an important component in this respect.

While in Iceland, Pence was asked by the Icelandic press whether he thought it had been a good idea to close down the base in 2006. He was evasive in his response, apparently saying that he would talk to staff at the base and report on the situation to U.S. President Donald Trump.

After the U.S. military left Iceland, most of the site was redeveloped for high-tech industry. But part of the site – the security zone – remained closed to the public. This remains under the auspices of the Icelandic Coastguard, but a Washington Post reporter travelling with Pence’s contingent described it as “slate grey and windowless. Highly secure. Lots of military and NATO work done here, per WH [White House].”

Pence took a “brief tour inside the command centre, which was full of screens tracking air and sea movements around Iceland and in the Arctic. It’s part of Naval Air Station Keflavik”. But then the press was escorted out, “so VPOTUS [the US vice-president] could get a classified briefing.”

Although it does not have its own military, Iceland is part of NATO and signed the Defense of Iceland Agreement in 1951 that is still valid. Trump recently complained that Iceland was not contributing enough to NATO funds.

Nevertheless, Iceland has promised to contribute 300 billion kroner (about 3.37 billion dollars) to upgrade the facilities in the security zone of the former base so that it can house up to 1,000 troops at a time in basic accommodation and upgrade two hangars so that they can house two fighter jet squadrons, or 18-24 fighter jets, at a time.

The build-up was first mooted and agreed in 2016 when a different government was in power in Iceland, but details have only recently emerged.

Now, the second largest party is the Left-Greens, which is anti-military and against NATO.

In a document produced in 2018, the U.S. embassy in Reykjavik said that “(the) abrupt 2006 closure of Naval Air Station Keflavik changed the U.S.-Iceland relationship fundamentally; the U.S. remained treaty-bound to provide for Iceland’s defence, but the physical manifestation of that commitment has disappeared.”.

The embassy noted that the political situation in Iceland since the financial crisis “strengthened pacifist political tendencies” and that “[while] the current government … is generally supportive of close ties with the United States, the Left Green Movement (LGM) leadership is less forward-leaning toward U.S. and NATO positions on security matters. We have to walk a fine line to maintain commitments in this area by being especially cognisant of the sensitivity of the issue within the government coalition.”

Indeed, the Left-Greens, the only party in the Althingi [Icelandic parliament] with an anti-NATO policy, have been bombarded with criticism for allowing funds to go towards the revamping of part of the old base. But it seems that they are fighting back, as PM Katrin Jakobsdottir told Pence, and that if future developments to the former base were going to happen, they needed first to be discussed democratically and transparently in the Althingi. Her party intends to put forward a proposal to this effect in the coming months.

Located in the security zone, the Icelandic Coast Guard includes maritime safety, security surveillance and law enforcement in the seas surrounding Iceland in its mandate. Although security and defence issues were discussed in the zone, Pence had also had meetings in Hofdi, the building where Reagan and Gorbachev met in 1986 and at which the initial steps were taken towards the Intermediate-Range Nuclear Forces Treaty (INF Treaty) which has recently ended.

At Hofdi, Pence met Reykjavik mayor Dagur B. Eggertsson, who said he was “grieved” that the INF Treaty had ended. Given its history, the mayor offered the building as a future venue to discuss disarmament … because I’m sure it’s not if but when people sit together again to work on the issue of nuclear weapons in the world, I think that Hofdi would be an excellent place for that.”

Pence was not averse to the idea but said that the United States considered that China and even India should take part in the discussions if a new agreement was to be made.

While talking to Thordarson, Pence had expressed concerns about increased military activities by the Russians in the Arctic, and said he was eager to discuss security and commerce issues with Jakobsdottir, who met Pence immediately after arriving from Sweden, where she had attended a convention organised by the Council of Nordic Trade Unions.

Pence later tweeted: “Great visiting the NATO Control and Reporting Center today in Iceland! Thank you to the Icelandic Coast Guard Commander for a great briefing on NATO operations based out of Keflavik Air Base.”

Jakobsdottir had different priorities. Besides pointing out that Iceland had a policy against military build-up in Nordic climes, she said that climate change, gender equality and the rights of LGBTQ+ people were key issues for her government to tackle. And she was much more worried about climate change than Russia’s activities in the Arctic.