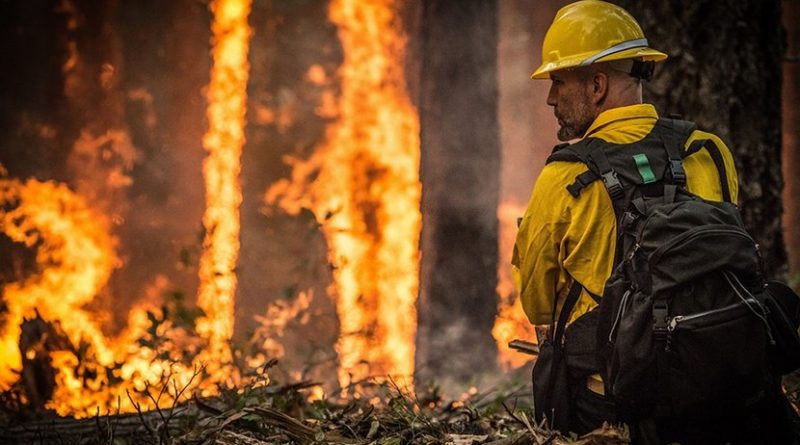 Over the last few days, California Governor Gavin Newsom, other politicians, and the news media have pointed to climate change as the single most important cause of historic, high-intensity “megafires” ripping through California and Oregon.

“This isn’t about ideology,” tweeted Governor Newsom, adding “What we are experiencing is an existential climate crisis.”

But California’s leading forest scientists say that fire suppression and the accumulation of wood fuel, not climate change, are what’s made California’s fires more intense.

“Climate dries the [wood] fuels out and extends the fire season from 4-6 months to nearly year-round but it’s not the cause of the intensity of the fires,” said US Forest Service scientist Malcolm North. “The cause of that is fire suppression and the existing debt of wood fuel.”

And now a large, well-managed forest appears to have turned a high-intensity fire into a low-intensity one, proving that how forests are managed outweighs the higher temperatures and longer fire season caused by climate change.

“It ain’t over till it’s over but so far it looks as though [Southern California Edison (SCE) electric utility’s] decades of burning and selective cutting in its Shaver Lake forest has paid off, big time,” tweeted forest scientist Jared Dahl Aldern on Saturday.

When the high-intensity Creek Fire arrived at the Shaver Lake forestlands it turned into what scientists call a low-intensity “surface fire,” which does not threaten the bigger and older trees. “The fire comes up to @SCE land,” tweeted Aldern, “drops to the ground, and stays out of the tree crowns.”

The Shaver Lake forest is not completely out of the woods yet because there are US Forest Service “in-holding” lands inside of Southern California Edison’s property.

“I’m not worried about the fire on our property because it’s like a hot prescribed burn” said SCE forester Ryan Stewart. “But on the forest service lands it’s all fuel, and so if the fire gets in there you know it’s going to rage.”

But whatever happens to Shaver Lake, says University of California, Berkeley forest scientist Rob York, “There are lots of cases in the scientific literature of prescribed burns having changed fire behavior.”

Scientists point to several cases of high-intensity fires in the “crowns,” or tops, of trees becoming low-intensity fires as they spread from US Forest Service lands to National Park Service lands, which have been using selective logging and prescribed burning for longer.

In 2013, after a high-intensity megafire known as the Rim Fire in the Stanislaus Forest reached Yosemite National Park, where prescriptive burning had occurred, it became a surface fire.

Similarly, the high-intensity Rough Fire of 2015 turned into a surface fire after it reached Sequoia National Park, whose managers had been using prescribed burns for decades.

But the evidence for the efficacy of what foresters call “fuel treatment,” through selective logging, prescribed burning, or both, can also be found on US Forest Service lands.

In 2014, areas where there had been selective logging and prescribed burning survived the high-intensity King megafire Eldorado National Forest.

On a map of the fire “you can see a little green finger that juts out into the sea of red (100% mortality of trees),” said York. “This is an example of a shaded fuel break doing its job to modify fire behavior.”

Even so, other parts of the Eldorado National Forest that received fuel treatment still burned-up.

The fuel treatment “really didn’t make a big impact because it was so small relative of the size of the fire,” said York. “Mega-fires need mega-treatments.”

York emailed me a photo of forest land where a “shaded fuel break” consisted of selectively-thinned forest surrounded on both sides by dense forest. “The strip of forest may change fire behavior in the treated area,” said York, “but not on either side.

“And after the fire we would have a strip of green forest, surrounded by blackened/charred forest on either side for miles,” notes York “I, and most in my field, would argue that the landscape on either side of the strip of thinned forest needs to look more like the strip in the middle.”

Similarly, the 2018 Carr fire burned through areas where there had been treatment of wood fuels over the last three decades.

Even so, areas that had prescribed fire within the last five years, particularly the last three years, did better.

Such cases are powerful evidence that selective logging and prescribed burning could allow many forests in California and elsewhere to survive climate change.

Aldren, who drew attention to the Shaver Lake forest success story, said we should learn more from the Native Americans who had been burning forests for thousands of years before the arrival of Europeans.

“When you use the term, ‘indigenous ecological knowledge,’ you’re using a knowledge system, and a way of approaching the land and forest that has adapted over time and over many different climates,” he said.

The Chukchansi tribe has prescribed burning for thousands of years in the Sierras, and have been working with SCE to pass on its knowledge to private local landowners. Such knowledge includes starting fires in circles around trees so they burn away from them.

The historic fires this year, and the Shaver Lake success story, may help accelerate the needed political and cultural change.

Would it help if politicians emphasized the need for better forest management, rather than just climate change? Forest scientists say yes.

“We’re good partners with the U.S. Forest Service, and they have good people locally,” said Southern California Edison’s Stewart, “but they are not getting support from the leaders of the Forest Service in Washington D.C.”

“I think it would help,” said York. “I have seen a cumulative effort to be supportive of prescribed burns, and a lot of funding to support it, but we still haven’t seen a big increase.”

A good start would be for Newsom to acknowledge that a century of fire suppression, not climate change, is what poses the existential threat to California’s forests.