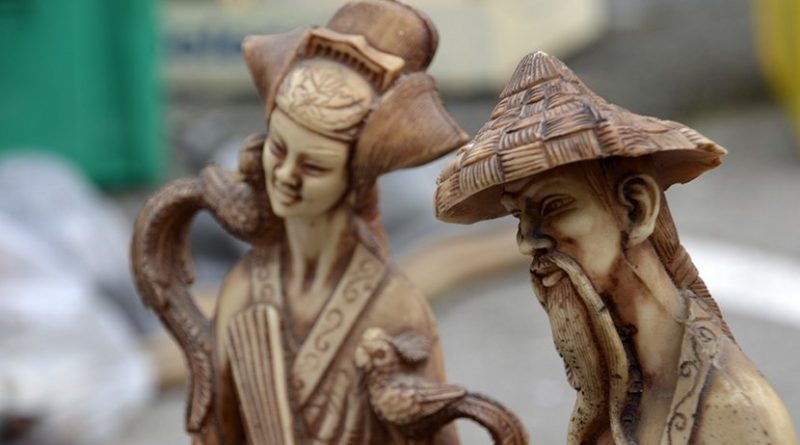 China’s government has been trying to put the best face on its economic growth prospects as it struggles with tariff pressures and a loss of investor confidence at home.

The clash between the government’s “good news” campaign and the market’s responses played out during the recent Golden Week holiday when official media issued a series of upbeat reports ahead of the reopening of trading on China’s stock exchanges on Oct. 8.

A lengthy analysis by the official Xinhua news agency on Oct. 7 offered “Key statistics revealing China’s economic resilience.” The “good news” story cited selected travel data during the one-week break along with figures on consumer spending and fixed asset investment in projects like buildings and roads.

The state media reports echoed themes of a 36,000-character white paper on economic and trade relations with the United States, released by the government on Sept. 24.

Separate holiday stories also appeared on subjects such as a rise in cement production, growth in the telecom sector, and an increase in profits of state-owned enterprises (SOEs).

The bullish reports paved the way for an announcement by the People’s Bank of China (PBOC) on Oct. 7 that it would cut the reserve requirement ratio (RRR) for most banks by 1 percentage point to pump funds into the economy.

The news on the eve of renewed trading the next day should have boosted the stock market. Instead, the benchmark Shanghai Stock Exchange (SSE) Composite Index plunged 3.7 percent.

The FTSE China A50 index of leading shares lost more than 4.8 percent in its worst performance since January 2016, Bloomberg News said.

On the first day back from the holiday, the central parity rate of the yuan weakened by 165 basis points, or hundredths of a percent, falling further the next day to 6.9019 to the U.S. dollar in official fixings.

The slippage raised doubts about whether the PBOC would defend the currency against sinking below 7.0 to the dollar this year.

The Monday slide in the Shanghai index was followed by a 5.2-percent drop to a four-year low on Thursday after the Dow Jones Industrial Average fell 3.1 percent the day before.

The adverse reactions appeared to be a sign that the government’s “good news” campaign for the holiday shutdown had backfired. Instead of taking encouragement from the PBOC’s reserve-cutting measure, the markets showed dismay that it was needed at all.

“The decision … is an indication that authorities in the world’s second-largest economy are getting nervous about a long-drawn [out] trade war with the U.S.,” the CNBC financial network said.

Not buying the ‘good news’

While officials hoped that the holiday would give them a chance to make the best case for the economy, investors worried about the buildup of bad news. The negative signs included a rise in U.S. interest rates, the threat of more tariffs, and a tough speech on China policy by U.S. Vice President Mike Pence on Oct. 4.

“A weeklong holiday for Chinese markets meant investors had an entire five days of news and data to digest in just one session, including a trade war between China and the U.S.,” a Business Insider report said.

The wave of positive reports proved unable to overcome less favorable developments, including the PBOC’s own report on Oct. 7 that its foreign exchange reserves fell in September by a larger-than-expected U.S. $22.7 billion to a 14-month low of $3.087 trillion.

The yuan also declined against the dollar in September for the sixth month in a row, Reuters reported. The currency fell 3.95 percent in the third quarter, marking the longest losing streak since 1992, Bloomberg said.

There were at least two explanations for the steep market selloff.

The first is that the government misread market sentiment about the state of the economy when it decided on the timing of the RRR announcement.

The second is that investors weren’t buying the official “good news” stories. Both explanations appear to be true.

“Explaining the twists and turns in China’s stock markets is an exercise in wild guessing, but I suspect that indicators of slowing growth, the Pence speech and only a modest government stimulus response are to blame for the selloff,” said Scott Kennedy, deputy director of China studies at the Center for Strategic and International Studies in Washington.

The Shanghai market started the new week with a loss of 1.49 percent.

On Monday, Reuters quoted an unnamed Beijing-based trader, saying that “investors have little confidence in their government’s willingness to support the market.”

The conclusions to be drawn from China’s “good news” stories and the market reaction aren’t pretty.

One possible reading is that state media tried to mislead investors about the weakening economic trends. Support for this argument may be found in a New York Times report on Sept. 28, citing government efforts to censor bad economic news.

The report cited a government directive to journalists on economic topics to be “managed.” These include “worse-than-expected data that could show the economy is slowing,” “local government debt risks” and “the impact of the trade war with the United States,” the paper said.

“The government’s new directive betrays a mounting anxiety among Chinese leaders that the country could be heading into a growing economic slump,” said The Times.

The policy may undermine the credibility of China’s economic reporting, as well as data collection by the National Bureau of Statistics (NBS), which has struggled to curb falsification for over a decade.

The Xinhua report of Oct. 7 on China’s “economic resilience” suggests that the agency may be walking a fine line between salesmanship and deception in addressing economic doubts.

On fixed asset investment (FAI), for example, NBS officials argued that growth was showing “new positive trends,” although the 5.3-percent rate in the first eight months of 2018 fell 2 percentage points from the year-earlier period.

The report failed to mention that official FAI growth rates have been declining for years and now stand at the lowest level since at least 1995, according to the Financial Times. Growth of infrastructure investment alone has plummeted to 4.2 percent from 19.8 percent a year before, NBS reports show.

An alternate reading of the “good news” debacle may be more disturbing, however, if it turns out that the government has been persuaded by its own rosy reports.

Having failed to convince the markets, the question is whether the government has convinced itself that economic growth remains strong.

Although it seems less likely, some degree of self- deception would explain the government’s apparent surprise after its 1-percent cut in the RRR was followed by a 3.7- percent drop in stocks.

After years of official data inflation, some economists have wondered whether China’s leaders have access to more realistic economic estimates before they make policy decisions.

The question has remained open since at least 2007, when Premier Li Keqiang, then Communist Party secretary of Liaoning province, called official economic figures “man-made” and “for reference only,” according to a leaked memo.

More than a decade later, Li’s comments may come back to haunt the government if the markets continue to reject its “good news” campaign.

Last week, China Daily reaffirmed that “China’s economy is set to continue its steady run for the rest of the year despite lingering economic headwinds,” citing a “recent” interview with NBS director Ning Jizhe.