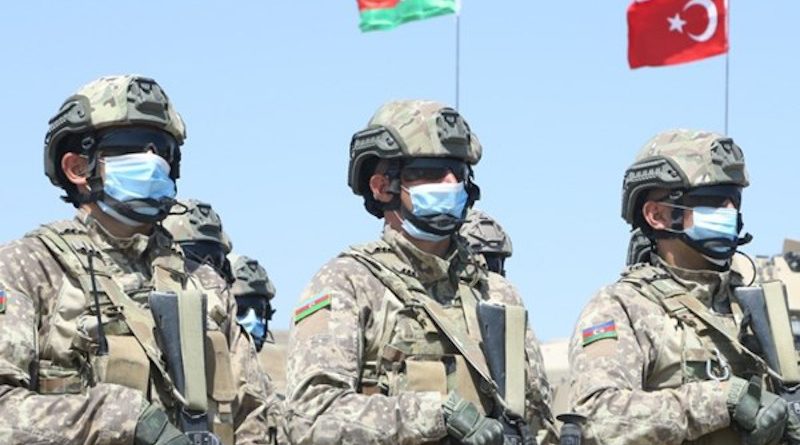 (RFE/RL) — Despite continued reports of Syrian mercenaries fighting in Nagorno-Karabakh after weeks of fighting over the breakaway region, Baku and Ankara deny reports that Turkey has recruited militants from Syria to fight for Azerbaijan.

The first reports about Syrian militants being sent to help Azerbaijan emerged in late September.

They came from correspondents for international news organizations like Reuters and the BBC, as well as British newspapers like The Guardian and The Independent, who tapped into sources they’d developed during years of covering Syria’s war.

All had interviews with veterans of the Turkish-backed Free Syrian Army (SNA), who described being recruited by a private Turkish firm to work in Azerbaijan.

Most declined to be named due to the sensitivity of the issue, saying they either feared reprisals or risked losing their pay.

But multiple sources from the SNA have told different Western news organizations they were promised pay ranging from $1,200 to $2,000 per month for work in Azerbaijan.

They shared similar stories — saying they were told they would serve “guard duty” at Azerbaijani oil facilities or at demarcation posts along the Line of Contact that had separated Azerbaijani and Armenian forces before the latest fighting erupted in the region on September 27.

Reuters quoted fighters from Turkish-backed rebel groups in northern Syria as saying they had deployed to Azerbaijan in coordination with Ankara, although Reuters said it could not verify that claim.

“I didn’t want to go, but I don’t have any money. Life is very hard and poor,” one militant, who had previously fought in Syria for the Turkish-backed Ahrar al-Sham faction, told Reuters.

Syrian militants were soon being quoted saying they regretted taking the job in Azerbaijan because they’d been sent straight to front-line positions in the midst of an intense battle, as hundreds of soldiers have been killed in the hostilities that started on September 27.

After more than a week of fighting, reports then began to emerge from Syria about the bodies of dozens of slain Syrian fighters being repatriated from Azerbaijan.

Armenia’s ambassador to Russia, Vardan Toganian, told Russia’s RIA Novosti state news agency in late September that Turkey had redeployed 4,000 Syrian militants to fight on the side of Azerbaijan.

Even independent experts who find merit in reports about Syrian mercenaries in Azerbaijan say Toganian’s figure appeared to be an exaggeration.

But within days, French President Emmanuel Macron, Iranian President Hassan Rohani, and Russian intelligence officials all issued statements supporting the allegation that Syrian mercenaries were fighting for Azerbaijan. None provided evidence to substantiate the claims.

“We now have information which indicates that Syrian fighters from jihadist groups have [transited] through Gaziantep [in southeastern Turkey] to reach the Nagorno-Karabakh theater of operations,” Macron told reporters at an EU summit in Brussels on October 1. “It is a very serious new fact which changes the situation.”

Rohani said the same “Syrian terrorist groups” that Iran had fought for years while supporting Syrian President Bashar al-Assad’s regime were reportedly turning up at the Iranian border near the southern flank of the battle around Nagorno-Karabakh’s main city, Stepanakert.

Sergei Naryshkin, the head of Russia’s Foreign Intelligence Service (SVR), even warned that the conflict could turn the region into “a new launching pad for international terrorist organizations” to enter Russia and other nearby countries.

On October 6, Naryshkin said the conflict was attracting people he described as mercenaries and terrorists from the Middle East. “We are talking about hundreds and already even thousands of radicals hoping to earn money in a new Karabakh war,” he said.

Turkish and Azerbaijani officials have ridiculed such claims.

Turkish President Recep Tayyip Erdogan noted that France and Russia — both members of the OSCE’s Minsk Group for negotiations on resolving the Nagorno-Karabakh issue — have supported the Armenian side with weapons, although the Turkish leader neglected to mention that Russia also has sold weaponry to Azerbaijan.

“You remain silent in the face of all this support, but you tell Azerbaijan: ‘You sent Syrian fighters there,'” Erdogan said on October 14. The Syrians “have work to do in their own country. They won’t go there.”

Hikmat Haciyev, an aide to Azerbaijani President Ilham Aliyev, said that “rumors of militants from Syria allegedly being redeployed to Azerbaijan are another provocation by the Armenian side and complete nonsense.”

Turkish European Union Affairs Minister Omer Celik called such reports “lies” spread by Armenia “to cover up their own hostility and to try to create an umbrella of dark propaganda over Turkey.”

Meanwhile, the Turkish Defense Ministry has claimed, without proof, that Armenia is aided by fighters from the banned Kurdistan Workers Party (PKK), who have fought an insurgency against Turkey for decades.

Most Azerbaijanis also view reports about Syrian fighters in their country as unproven. They dismiss the allegations as part of a disinformation campaign aimed at discrediting Azerbaijan.

“There is no concrete fact about Turkey’s military support except political support to Azerbaijan,” Mammadli tweeted when such stories began to emerge. “By such manipulation at the expense of unconfirmed and unknown sources, they try to dress the conflict in religious clothes.”

Azerbaijani freelance journalist Seymur Kazimov told RFE/RL recently from the conflict zone that “rumors there are Syrians fighting on our side are untrue. There is no evidence.”

He said the “scandal” was started by one foreign journalist who “wrote an article based on one guy — no name, no pictures. Nothing. No one verified this.”

“Even for me as a journalist, it’s impossible to get this information,” Kazimov argued, claiming there hadn’t been any killed or wounded Syria mercenaries on the Azerbaijani side.

“Like, OK, guys. If you have some evidence, share it with us,” Kazimov said. “Nothing. Just gossip. It’s not serious stuff.”

In fact, even as Kazimov described the situation from his point of view of covering the conflict, fresh details were emerging from Syria and Turkey about the bodies of more than 50 slain mercenaries being returned to Syria after being killed by Armenian artillery barrages.

Reports in The Guardian and The Independent newspapers spoke of distraught relatives in Syria receiving their bodies, and SNA fighters there launching an anti-recruitment campaign to dissuade other Syrian militants from signing contracts with Turkish security firms to work in Azerbaijan.

The Washington Post, writing on October 13 about the repatriation of the bodies of 52 Syrian fighters, reported the deployment of Syrian mercenaries as a fact.

Pallone called on the U.S. State Department and Washington’s “partners” to condemn “these blatant violations of international law,” saying that “it’s clear that Azerbaijan and Turkey are using foreign mercenaries in their ongoing acts of aggression” in Nagorno-Karabakh.

Liz Cookman, an Istanbul-based journalist writing for the U.S. journal Foreign Policy, said sources within the Turkish-based SNA had confirmed that at least 1,500 Syrian fighters have been deployed to Nagorno-Karabakh.

“The first fighters were transferred in late September to southern Turkey and then flown from Gaziantep to Ankara, before being transferred to Azerbaijan on September 25,” Cookman reported on October 5. “According to fighter accounts, SNA commanders arrived earlier to explore the region and coordinate with the Azerbaijani army about the distribution of troops.”

Cookman said many Syrians who took a four-month contract for about $1,500 per month, paid in Turkish lira, were “already regretting it, especially now that a reported 55 Syrian mercenaries have been killed after being confronted with a lot more hands-on fighting than they’d been promised.”

Reputable international media organizations, foreign governments, and independent analysts are not the only sources who report Syrian mercenaries have been fighting for Azerbaijan.

There also are videos circulating on social media that purportedly show Syrian fighters in the conflict.

The Independent newspaper reported that unverified video shared on social media showing Syrian fighters talking about being in Armenia has been geolocated by analysts to an Azerbaijani base in Horadiz, just a few kilometers from the front lines.

The Independent reported that another social-media video shows a young Syrian man on the front line who was identified by Syria expert Elizabeth Tsurkov as Mustafa Qanti, a 23-year-old fighter from the Turkish-backed Hamza Division. It said that footage was geolocated by “a well-known open-source expert” to an Azerbaijani ammunition depot just south of Horadiz in the combat zone.

Tsurkov, who said she had had personal contact with Syrian mercenaries fighting for Azerbaijan, shared a video on October 11 that she said “apparently” shows Turkish-backed “Syrian National Army fighters” filming themselves in Azerbaijani uniforms near the Iranian border.

But it’s also clear that some social-media posts are not what they purport to be, suggesting that different actors are posting bogus video clips as part of disinformation campaigns.

Bellingcat, a U.K.-based, open-source investigative website, filed a report on October 7 showing how a Telegram channel affiliated with Russia’s private mercenary firm Vagner PMC used photographs from Syria to “troll” Nagorno-Karabakh analysts about the presence of Russian fighters in the battle.

Such activity has contributed to the divisive public debate about whether Syrian fighters are in Azerbaijan.

The Nagorno-Karabakh conflict is not the first time Turkey has been accused of recruiting militants it has backed in Syria to fight in other countries.

A United Nations panel of experts says Turkey in December 2019 began to recruit about 5,000 Syrian fighters from Turkish-backed forces to bolster Libya’s internationally recognized Government of National Accord (GNA).

That UN panel also said Russian security contractors had recruited an additional 1,200 Syrians who supported the Assad regime in order to fight for the GNA’s rival, Libyan strongman Khalifa Haftar.

Numerous Western media reports quoted those recruited by Turkey as saying they had been promised jobs guarding Libyan installations but, instead, found themselves engaged in bitter combat against Haftar’s Russian-backed forces.

The pro-government Turkish think tank SETA says 21 of the 28 factions within the SNA umbrella group received support from the United States in order to combat the Islamic State extremist group in Syria.

But other SNA factions, such as Ahrar al-Sham, were previously allied with Al-Qaeda and have been described by some U.S. officials as “terrorist” organizations.

Neil Hauer, an expert for the Middle East Institute currently reporting from Nagorno-Karabakh, said he was skeptical at first about reports of Syrian fighters in Azerbaijan. But he said now there was too much “hard evidence” of a Syrian presence to ignore.

“Turkish forces are replicating what they did in Libya,” Hauer told The Independent. “But the conflict [in Nagorno-Karabakh] is completely different, as two professional state armies are involved. The Syrians are completely expendable when they are there. The battlefield value of these guys is very limited.”

With reporting by Amos Chapple