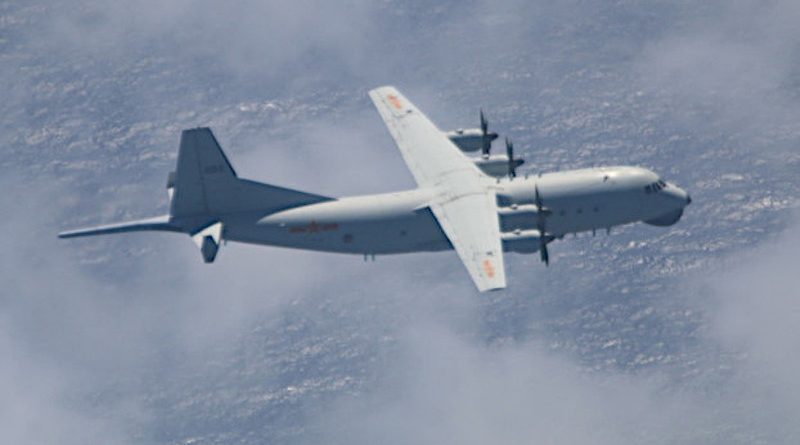 China’s air force has conducted an unprecedented number of flights into Taiwan’s Air Defense Identification Zone near the isolated Pratas atoll, one of Taiwan’s few outposts in the South China Sea, according to the self-governing island’s defense minister.

Sunday marked the 220th intrusion into the southwest corner of Taiwan’s claimed Air Defense Identification Zone, or ADIZ, this year by surveillance planes of the People’s Liberation Army Air Force (PLAAF), according to a release by Taiwan’s Ministry of National Defense. That part of the ADIZ covers the airspace between the island of Taiwan and Pratas atoll.

Defense Minister Yen Teh-fa told legislators on Oct. 8 that there had been 217 sorties by PLAAF aircraft into Taiwan’s southwestern ADIZ in 2020. There have been three more sorties since that time, bringing the total to 220. Most sorties this year have involved military surveillance aircraft. On Sunday, the ministry published a photo of a Y-8 anti-submarine warfare plane flying near the atoll.

There were only two publicized intrusions into Taiwan’s ADIZ by China in 2019, according to a report from the Federation of American Scientists.

“In 2020 … intrusions into Taiwan’s ADIZ have become an increasingly more common air provocation, with more intrusions publicly reported in the first half of 2020 than total intrusions of any previous year,” the report says.

An ADIZ is an area where civilian aircraft are tracked and identified before further entering into a country’s airspace. It is different from a no-fly zone – it does not restrict travel in and out of its limits, nor does it usually apply to military aircraft, although there is no international rule or law saying it cannot. Taiwan’s ADIZ roughly corresponds to its exclusive economic zone, a 200 nautical mile boundary off its coasts.

Pratas lies roughly 275 miles from the southern Taiwanese city of Kaohsiung, and only 210 miles southeast of Hong Kong. It is one of only two features in the South China Sea that Taiwan occupies. A national marine park was established on it in 2007.

There are in all six claimants to territory in the disputed South China Sea. Brunei, China, Malaysia, the Philippines, Taiwan and Vietnam. Of those, China and Taiwan lay claim to Pratas.

In July, five from Hong Kong were intercepted by the Taiwanese coast guard en route to Pratas, seemingly fleeing the imposition of a National Security Law on Hong Kong that has seen a wide-ranging crackdown on civil liberties once enjoyed by the semi-autonomous city. Twelve more were stopped by Hong Kong authorities in late August after they attempted to flee for Taiwanese territory in the same manner.

Jessica Drun, a non-resident fellow with the Washington-based Project 2049 Institute, said the attempted flight of people from Hong Kong to Pratas and China’s aggressive flights near it may be linked. Beijing could be “sending a message to Taipei not to intervene or support Hong Kong democracy activists.”

Pratas hosts a contingent of Taiwanese coast guard personnel and a rotational Marine presence but an attempt to resupply that garrison failed Thursday morning as a civilian airliner contracted by Taiwan’s Defense Ministry was told to turn back by air traffic controllers in Hong Kong, according to a report by Taiwanese state media.

“Pratas has always been on China’s radar for its strategic position – in the first island chain, at the mouth of the Luzon Strait, and in the direct path between the PLAN’s base in (the southern island province of) Hainan and the Pacific Ocean – and is located in an area of the South China Sea where China currently does not hold any territory,” Drun said. “The Hong Kong factor could be used as a convenient and timely pretext for increased surveillance around Pratas, as well as any further escalation.”

The first island chain refers to the string of islands and islets closest to China’s coast that are occupied or administered by other governments – starting with Russia’s Kuril Islands in the far north, running through the island of Taiwan, and ending in the southern half of the South China Sea.

China, under the People’s Republic of China, claims Taiwan and its outlying islands as its own territory. Taiwan is the seat of government for the Republic of China, which previously ruled the mainland of China until 1949, at the conclusion of the Chinese Civil War when the Nationalist Party, or Kuomintang, evacuated across the Taiwan Strait.

The People’s Republic of China has vowed to annex Taiwan, by force if necessary. Drun said Beijing is escalating its provocations now out of frustration with the declining likelihood of a peaceful unification between the mainland and Taiwan on the PRC’s terms.

“I’m not sure we can pinpoint one specific factor – to me, it’s more a confluence of factors that are being interpreted by China as Taiwan moving further from its grasp, to include the rejection of ‘One Country, Two Systems’ by both major political parties in Taiwan, Taiwan’s deepening of ties with Washington, and a growing sense of Taiwanese identity, among others,” she said.

In related news, the United States Navy transited the Taiwan Strait on Wednesday, calling the passage “routine” and “in accordance with international law” in a release from the Pacific Fleet.

Tarnished Crown: Finding The Thorns Of A Gambling Empire – OpEd