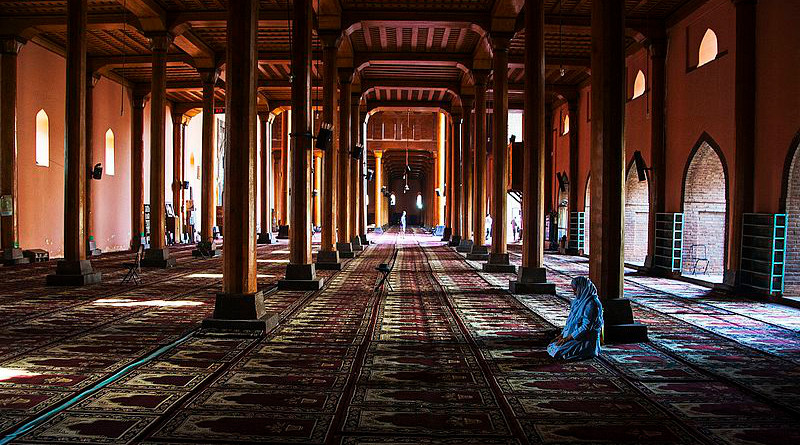 Once a peaceful and tranquil place famous for its scenic beauty and salubrious climate, Kashmir is unfortunately associated with violence and bloodshed today. However, this place has several enduring positives which are being consistently ignored by protagonists who keep raising the Kashmir issue at different platforms since it serves their vested interests.

In the contemporary era when religion has increasingly evolved into a somewhat aggressive pivotal marker of identity and is being used by the unscrupulous to breed inter-faith hatred, it may be difficult for the younger generation to imagine that Kashmir was once a melting pot of various ethnicities and religious faiths with a remarkable sense of oneness, irrespective of culture or religion the generations amongst its people. The age-old legacy of Muslim-Pandit amity bears testimony to the highest level of communal harmony that prevailed in Kashmir.

Despite of being the minority community in Kashmir, the 1,400,000 strong Pandit community never faced any discrimination and lived harmoniously with their Muslim brethren. In the early 1990s mass-migration of Kashmiri Pandits and within a decade, their numbers in Kashmir dwindled to only about 20,000. Yet, this unfortunate event didn’t enervate the tolerant and multi-religious character of Kashmiri society.

Hindu-Muslim bonhomie continues there have been many instances where Muslims have helped in performing the last rites of Hindu thus upholding the centuries old tradition of brotherhood between the two communities. Similarly, during Amarnath Yatra, Muslims help in ferrying their Hindu brethren to the Holy Cave in the snow-capped mountains of southern Kashmir.

Sadly, the exodus of Pandits and irresponsible attempts to give the ongoing violence in Kashmir a communal hue has given enemies of communal amity a golden opportunity to widen inter-faith divide in Kashmir. For example, Madrassas (centres for Islamic education) are often portrayed as schools that propagate fundamentalism and encourage radicalisation.

However, the truth is that besides imparting education about Islam, these centres are also focusing on preparing students for competitive exams, both at local and national levels as well as spreading awareness about the inclusive nature of Kashmiri culture.

Apart from other factors, hospitality of Kashmiris is renowned throughout the world. People of Kashmir are by nature very caring and equally concerned about the wellbeing of one and all without any reservations. An example of this is the public response to an accident of an army vehicle ferrying troops that occurred a few years ago near Lasjan village in the outskirts of Srinagar. Despite frequent clashes between the ‘pro-freedom’ demonstrators and security force personnel, locals set aside their differences and rescued the injured army soldiers.

One of the most important ingredients of Kashmiri culture is Sufism-a path of spiritual advancement, an expansion of consciousness leading to awareness of self and the universe. The substance of Sufism is selflessness and actualisation of truth and Sufism is the driving force behind the traditional communal harmony that once existed in Kashmir. Even though an offshoot of Islamic belief and propagated by saints of the Rishi order, besides Muslims, Kashmiri Pandits (Hindus) and other minority communities in Kashmir also revered Sufi saints and paid obeisance at Sufi shrines.

In 1995 when Shrine of Sufi saint Alamdar-e-Kashmir (RA) at Charar-i-Sharief was burnt to ashes by a group of militants led by Mast Gul, Kashmiri Pandits were as aghast as their Muslim brethren. In fact this despicable incident so incensed Kashmiris that after his escape to Pakistan by setting this holy shrine ablaze, when Mast Gul visited a Hizbul Mujahideen training camp in Pakistan administered Kashmir, he was beaten black and blue by the Kashmiri militants there and witnesses recall seeing him leave the camp bleeding profusely from his nose- such is the force of Sufism in Kashmir!

What was traditionally a strong confluence between Islam and Hinduism in Kashmir, a region where the shared language and culture worked as the greatest bond between the two communities, has succumbed to mounting fissiparous pressures that has targeted communities of Kashmiris for their non-conformist ways in accepting religious practices.

Whereas Muslim Sufi saints preached pluralism and tolerance of other faiths, the novel type of ‘political’ Islam that’s spawning in Kashmir is stoking feelings of intolerance and prejudice. At societal level, outbursts of violence, radicalization and militancy that have been plaguing Kashmir for the past three decades and these have undoubtedly led to the transformation of relationship between Muslims and Pandits.

Thus, the very thought of interreligious communities co-existing in Jammu and Kashmir has today become a utopian dream. So, while everyone laments loss of human life and the humongous economic downside due to the continuing violence, very few people talk about the unfortunate demise of religious plurality in Kashmir – which is perhaps the main casualty of the ongoing conflict in the land that was once referred to as ‘paradise on earth’!

It should never be forgotten that whatever one might say but Kashmir can never progress unless and until it resuscitates its inclusive and tolerant culture that promotes inter-faith empathy, which is precisely what the Holy Koran teaches us.

Home » Rebuilding The Kashmir Of Our Dreams – OpEd