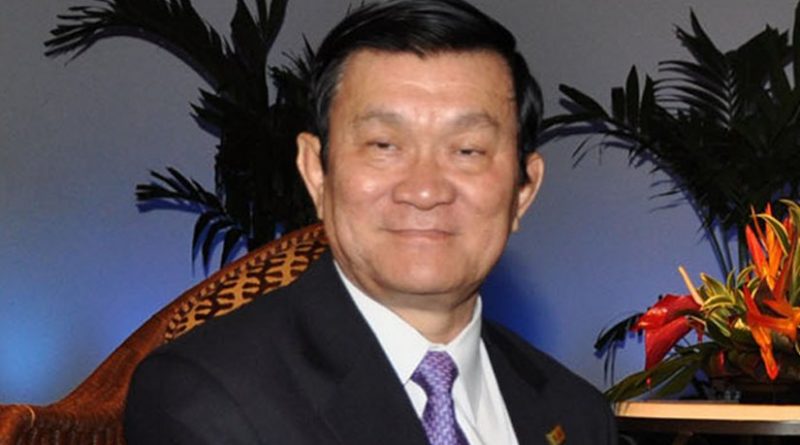 Vietnam’s popular President Truong Tan Sang is set to steal the show at the two-day Asia-Pacific Economic Cooperation (APEC) Leaders’ Meeting in Manila this week for at least three reasons.

First, Vietnam — a rising star in Asia — is an epitome of free trade, the flesh and blood of APEC. Thanks to its commitment to free trade, bold economic and political reforms (doi moi), Vietnam has blossomed into a lower-middle-income country from one of the poorest countries in the world in less than three decades. The country, which joined APEC in 1998, utilized the regional grouping to boost its exports and become a haven for foreign investors and global manufacturers. The Vietnamese economy is still growing more than 6 percent per year despite the global financial crisis.

Vietnam’s cumulative foreign direct investment, as of June 2015, was US$257 billion, making it the third-largest recipient of FDI in ASEAN after Singapore and Indonesia. Vietnam is today ASEAN’s biggest exporter to the US, according to the US Census Bureau data, with $30.58 billion of exports last year. It is becoming, in the words of many, a “second China”.

Second, Vietnam recently joined the Trans-Pacific Partnership (TPP), a trade agreement the main aim of which is to cut trade barriers and set common standards among its 12 Pacific Rim member countries ranging from the giant US to tiny Brunei Darussalam. The ambitious trade pact is the economic cornerstone of US President Barack Obama’s drive to refocus on Asia.

“The TPP is central to our vision of the region’s future and our place in it,” Obama’s national security advisor Susan E. Rice told the International New York Times and other media recently.

In the true spirit of free trade, Vietnam also signed the Free Trade Agreement, which will eliminate almost all tariffs on trade between signatories, with the EU in August. Before that Vietnam became the first ASEAN country to sign a free trade agreement with the newly established Eurasian Economic Union (EEU), an economic union of Russia, Kazakhstan, Belarus, Kyrgyzstan and Armenia with a common market of 176 million people and a combined GDP of $2.5 trillion.

Due to these free trade agreements, it is expected that Vietnam’s exports, which stood at $150.2 billion in 2014, may surpass the $200 billion mark in two to three years’ time.

Global leaders, including British Prime Minister David Cameron and Chinese President Xi Jinping, have been rushing to Hanoi or inviting Vietnamese leaders to their countries to forge new ties and explore opportunities, while Obama will also soon visit Vietnam to strengthen the strategic relations between the two countries.

Third, Vietnam is one of the main claimant countries in the South China Sea (SCS) disputes, claiming the Paracel and Spratly Islands. Many APEC leaders want to hear first hand from President Sang about the disputes, which pose a major threat to peace and security in the region. While APEC leaders cannot officially discuss the most contentious parts of the SCS issue, it will nonetheless be a hot topic during bilateral meetings. Both Vietnam and Philippines want the SCS disputes to be solved through peaceful negotiations according to international law and the United Nations Convention on the Law of the Sea (UNCLOS).

In 2017, Vietnam will host the APEC leaders’ meeting, while the following year’s meeting will be held in Peru.

President Sang is set to reiterate in Manila that Vietnam will strongly support measures to fulfill the Bogor Goals and Bali commitments and to liberalize and facilitate trade and investment.

Bilaterally, Vietnam and the Philippines have very good relations. Sang and his Philippine counterpart Aquino are close friends and have a strong rapport. In fact, the two leaders met during the last year’s APEC meeting in Beijing and agreed to boost bilateral relations and work closely within regional and international forums.

“Upgrading the Vietnam-Philippines relationship to a new height will not only push forward bilateral ties, it will also make a positive contribution to peace, co-operation and development in the region, as well as unity within ASEAN,” Minh said in a statement after the JCBC meeting.

Expressing a similar view, the Philippines emphasized that the growing ties were for the benefit of both countries’ people.

“Regular meetings between the Philippines and Vietnam reflect the commitment of both to continuously find ways to improve cooperation, deepen engagement and broaden avenues for further collaborative endeavors for the benefit of the Filipino and Vietnamese people,” Philippine Foreign Secretary Albert F. Del Rosario said in a press release issued by the Philippine Department of Foreign Affairs.

During Sang’s visit to Manila, the most important event, besides the APEC meeting, will be the signing of an agreement on establishing a strategic partnership between the Philippines and Vietnam, adding to the latter’s current two strategic partners – Indonesia and Thailand – in Southeast Asia.