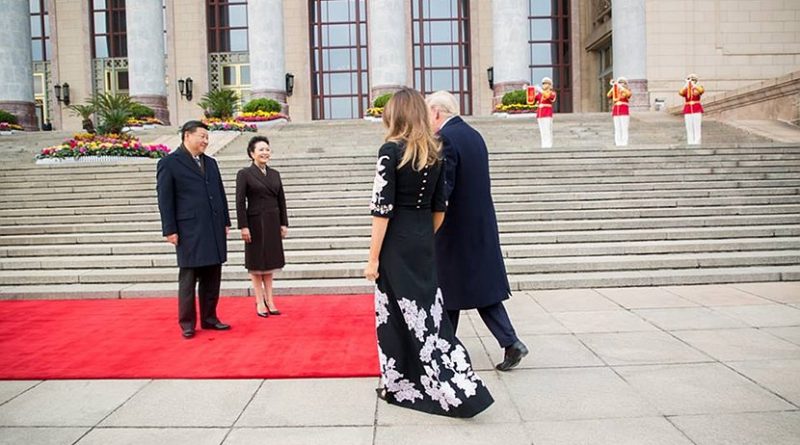 By Wang Li and Yang Yi-zhong*

According to a conventional argument, with no heir apparent and his power firmly consolidated, Chinese President Xi Jinping is at the height of his authority when U.S. President Trump made his first state visit last week. On October 18, Xi’s inaugurating message was clear: China is already a superpower and should begin to act like one.

This should be a wake-up call for the United States. North Korea is certainly an urgent security issue that needs to be resolved. But Trump has to widen his focus to counter China’s increasingly assertive foreign policy and address challenges to U.S. leadership in the region. Given this, the world media once again focused on Trump’s visit to China and the meetings followed between Trump and Xi Jinping.

But in Chinese eyes, this is Trump’s first visit to China since he assumed the presidency in February, and also a “unforgettable” trip to China, as he said, because Xi and his wife welcomed Trump’s couple with a special arrangement of “state visit plus”. In foreign affairs, protocol is commonly described as a set of international courtesy rules including high-standard reception. In view of this common practice, President Xi Jinping and his wife welcomed their state guests with an informal afternoon tea and then formal dinner at the Palace Museum, also called “the Forbidden City”. Why?

First is to show Chinese traditional culture. When President Xi Jinping visited Mar-a-Lago last April, President Trump offered a hospitable and considerate reception to Xi and his wife with high-standard and thoughtful arrangements being made in all respects. Since China is known as a nation that courtesy calls for reciprocity, Beijing attached great importance to President Trump’s visit to China. As the Forbidden City embodies both the ancient splendor of the Chinese culture and mirrors the vicissitudes of modern China, it serves as an indispensable window to learn about the Chinese aspiration for the greatness in the world. It was during the tour in the Forbidden City where President Xi lost no time to reveal the core parts of Chinese thinking on the world order in the new century, that is, the harmony should be the supreme mean (way) of the human society. China will be dedicated to create a new-type of great power relationship in light of shared destiny of global community.

Second is to present the mutual respect. Also in the Forbidden City, President Trump showed President Xi a video of his grand-daughter Arabella Kushner singing in Mandarin and reciting the ancient Chinese poetry. That video has been shared and reposted enthusiastically by Chinese netizens many times. In terms of the concept of “public diplomacy”, Arabella acted as the little ambassador of China-US friendship since she is adored by the Chinese people across the country. This special episode is very heart-warming indeed, as it was reported that Xi’s couple were deeply impressed by Arabella’s excellence in Chinese. It can be said that certain social groups of America including the “First Family” of the United States have revealed their respects to Chinese culture and classical values. Given this, it is important to bring closer the distance between the Chinese and American people through their common interests and the shared responsibilities as the two largest economic giants.

Obviously, from the very beginning, Xi Jinping and Trump have worked to forge a mutual respect and trust in their personal ties. Because of this, both of them liked to have small-group and informal interactions, which gave them enough time and room to have an in-depth and strategic exchange of views on major issues of common interest. And the exchange of views can help the two powers to enhance mutual understanding and mutual trust in the future. Yet, behind this point, we can discern that Trump has received an honour in Beijing not granted to any U.S. President since the ice-breaking trip to China by former President Nixon in 1972. As the Forbidden City was the historic palace that housed Chinese emperors and their families for over 600 years, dining in the Forbidden City is indeed a significant honour for Trump and his family, in keeping with what China’s Ambassador to the U.S. Cui Tiankai had promised would be a “state visit-plus.”

However, the relations between China and the United States are essentially related to “high politics” that involves security issues, trade disputes and the balance of power. In his meetings with Xi, Trump talked firmly about the DPRK-related resolutions of the UN Security Council. President Xi made it clear that China earnestly fulfills its due international obligations in light of the resolutions of UN Security Council. Meanwhile, considering China’s rise leads to its more assertive foreign policy, there are a few clues to reveal that the United States will increase its military presence in Asia, either consolidating their well-established alliance with Japan, Korea (ROK) and Australia or expanding new trans-regional strategic partnership with India.

Yet, symbolically, the using the Forbidden City in this manner is a dramatic shift in either way. What was once known as the ‘palace of blood and tears’ is now being used for a state visit. This could be seen as China now facing a historic juncture: under Mao’s revolutionary leadership, the Chinese people stood up. Under Deng’s reform, the Chinese people became rich. And now, under Xi, the nation is becoming strong. He reiterated that “no country alone can handle all the challenges that mankind faces and no country can retreat into self-isolation”—a veiled critique of Trump’s America First foreign policy.

It is against this backdrop that Xi’s new era presents significant opportunities and challenges for Washington. American expert on China’s affairs Paul Haenle argued recently, it is therefore vital that Trump maintains a U.S. position of strength. Given that the United States is still wealthier and more powerful and resilient than any of its competitors, it is necessary to remain the more attractive model in the face of a Chinese alternative. Yet, the United States needs to strengthen its domestic foundations and continue to invest in the alliances, partnerships, and systems of rules and norms that have allowed it and countries across Asia to thrive under The Pax Americana.

In conclusion, Xi stressed that President Donald Trump’s visit to China was of great significance, which was not only a matter of great concern to both China and the US, but also attracting the attention of all countries in the world. It is also true that with concerted efforts of the two sides, the visit will yield positive and important results. To that end, Xi even briefed Trump at inquiry on China’s current economic and social development, including China’s strategic goals in the next 30 years. Trump did thank his Chinese counterpart for the considerate arrangement on his visit to China with praising China’s achievements in economic, social and diplomatic fields.

However, as a superpower for so long time and lonely as well, it takes some time for the United States and its people to welcome new equal partners in global governance. In so doing, China does indeed need both power and patience.