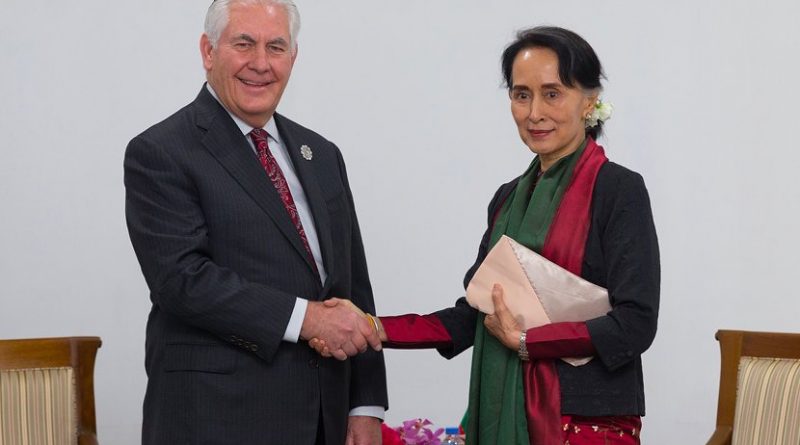 The United States announced almost $50 million in additional humanitarian aid for refugees fleeing violence in Myanmar’s Rakhine state, as it called Wednesday for “a credible and impartial investigation” into allegations of mass atrocities against Rohingya who sought shelter in Bangladesh.

In announcing the assistance during a visit to Myanmar’s capital, Naypyidaw, U.S. Secretary of State Rex Tillerson said the fresh infusion of aid would bring to about $151 million the package of American assistance since October 2016, when the insurgent group Arakan Rakhine Salvation Army (ARSA) carried out attacks on border-guard stations in Rakhine.

At least 615,000 refugees have crossed into Bangladesh since Aug. 25, after the Myanmar military launched a brutal crackdown following a fresh round of militant attacks. The U.N. secretary general has described the influx as the “world’s fastest-developing refugee emergency,” with many governments assuring aid to Bangladesh.

Tillerson indicated that the U.S might impose targeted sanctions on individuals behind the atrocities, and he called for an urgent probe.

“I think clearly what we know occurred in Rakhine state that led to so many people fleeing the area has a number of characteristics of certainly crimes against humanity,” Tillerson said.

“Whether it meets all of the criteria for ethnic cleansing, I think we continue to evaluate that ourselves,” he said, adding, “I think this is the reason why an independent investigation would be very useful to help us understand not just who – who to hold accountable – but also why – what were the motivations behind what occurred.”

But the top American diplomat, who met with de facto Myanmar leader Aung San Suu Kyi in Naypyidaw, ruled out economic sanctions against the Southeast Asian nation, saying these wouldn’t resolve the crisis.

“Well, there are various sanction bills that are being drafted and considered, and I’ve been trying to follow those as best I can while I’ve been on the road for a couple of weeks, but I will be looking carefully at those when I return to Washington tomorrow night,” he told a news conference.

“I think broad-based economic sanctions against the entire country is not something that I would think would be advisable at this time,” he said.

“We’re here to support Myanmar,” he added. “We want Myanmar to succeed. We want its democracy to succeed. And so actions that set back the ability to provide economic activity, jobs for people, I have a hard time seeing how that helps resolve this crisis.”

Some U.S. senators are pursuing legislation to impose economic and travel sanctions on Myanmar’s armed forces and their business interests.

‘I’ve not been silent’: ASSK

Myanmar has blocked a three-person commission appointed by the United Nations to look into reports of atrocities committed against the Rohingya, whom Myanmar considers illegal immigrants from Bangladesh and has systematically discriminated against.

Though the U.N. and rights groups have said the atrocities committed in northern Rakhine amounted to ethnic cleansing, the U.S. has avoided using the term.

Responding to a question about international criticism about her remaining silent on the refugee crisis, Aung San Suu Kyi, who joined Tillerson at the news conference, said the State Counselor’s Office had issued many statements on the matter and that she herself had made statements focusing on speech that “avoids inflaming sectarian tensions.”

“[I]f you check, you will see that I’ve not been silent,” she said. “I’ve not been making very incendiary statements or very exciting statements, but we have always kept the public informed for what has been going on and what we are trying to do to make the situation better.”

Tillerson wrapped up his talks in Myanmar as two human rights groups released a report describing “mounting evidence” of genocide against Rohingya Muslims.

The report by the U.S. Holocaust Memorial Museum and Fortify Rights, titled “They Tried to Kill Us All: Atrocity Crimes against Rohingya Muslims in Rakhine State, Myanmar,”  was based on a year of research and more than 200 in-person interviews in Myanmar and on the Myanmar-Bangladesh border with Rohingya survivors, eyewitnesses and international aid workers, the groups said.

“Burma’s leaders have denied that crimes against humanity or ethnic cleansing have taken place against Rohingya victims, defying statements of high-level United Nations officials that mass atrocities likely have taken place,” said the report, referring to Myanmar by its former name.

“The Rohingya have suffered attacks and systematic violations for decades, and the international community must not fail them now when their very existence in Myanmar is threatened,” said Cameron Hudson, director of the Simon-Skjodt Center for the Prevention of Genocide at the U.S. Holocaust Memorial Museum.

“Without urgent action, there’s a high risk of more mass atrocities,” Hudson said in a statement accompanying the release of the report.

Meanwhile, the Myanmar government’s newly created Union Enterprises for Humanitarian Assistance, Resettlement, and Development (UEHRD) on Wednesday unveiled some details of its resettlement plan for refugees returning to northern Rakhine state from Bangladesh and other areas.

The committee’s chief coordinator Aung Tun Thet said the government would accept 73 Hindu households as the first group of refugees and would build houses for them in Ohtein village in Rakhine’s Maungdaw township.

“We have considered sending the refugees to the places where they lived [before],” he said during a meeting on developments in Rakhine at the state government headquarters in Sittwe.

“The resettlement plan is also important because development and peace are necessary [for Rakhine],” he said.

In a related development, Myanmar and Bangladeshi border police agreed on Wednesday to fight ARSA insurgents, during a six-day bilateral meeting on security and law enforcement that began on Monday in Naypyidaw.

Myanmar had already given Bangladesh a list of more than 1,000 suspected militants reported to have been involved in attacks in northern Rakhine state, and who subsequently fled to Bangladesh, along with their photos and related documents, said Brig. Gen. Myo Swe Win, the MPF’s chief of staff.

Both countries agreed to place a priority on antiterrorist organizations, he said.

“Myanmar requested that Bangladesh investigate terrorists and hand them over to Myanmar,” Myo Swe Win said.

“The BGB director-general said that his country had never and would not accept any unlawful organizations, insurgents or terrorists on its soil,” he said. “It will investigate not only members of the terrorist organization ARSA, but also other criminals, and hand them over to Myanmar.”

Home » US Announces $47 Million In New Aid For Rohingya Refugees