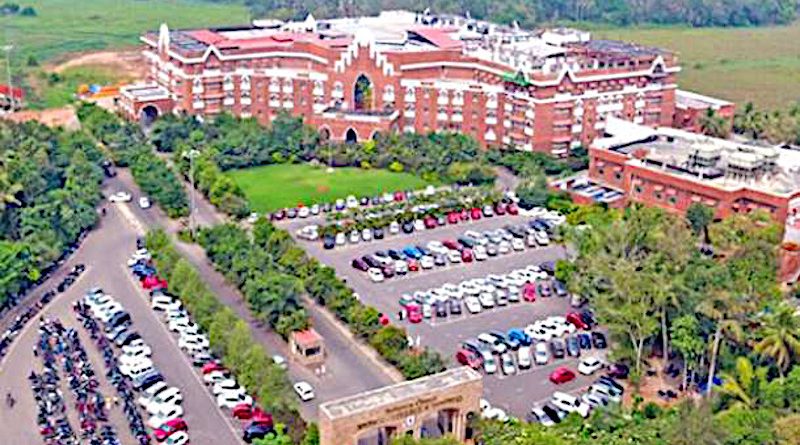 The headquarters of the Believers' Church in India's Kerala state where income tax officials began a search for unaccounted wealth. (Photo supplied)

Indian tax officials will continue investigating the financial dealings of the Believers Church, an independent group based in Kerala state, for at least another two months, a church official has said.

Federal Income Tax Department officials began searching some 60 centers of the church, including its headquarters based in the southern state, on Nov. 5, suspecting it of hoarding illegal money.

“The investigation will continue for another two months more as they need time to examine the documents collected from the raids,” said the church’s spokesperson Father Sijo Panthappallil in a video message.

Tax officials searched close to 60 centers of the church simultaneously and called off the operations on Nov. 7, the priest said.

He dismissed media reports about the search as “either half-truths or totally fake.”

Unconfirmed media reports claimed officials seized millions of rupees in cash hidden in a car parked in the church’s headquarters.

Father Panthappallil’s video message, released a day after the search was called off, did not explain which part of the reports were half-truths or fake.

Tax officials said the search was conducted based on credible information that the group had misused foreign donations for helping the poor by spending them on real estate and other business establishments.

Church officials were not available for comment on the developments.

Father Panthappallil’s message said Believers Church officials were busy with the process of the search and “could not inform media and public about the official stand of the church.”

He said that after studying the documents collected, if the officials “point out any anomalies or lacuna in the accounts of the church, we will take all necessary steps to rectify them and move forward.”

He said the church was cooperating with tax officials and appealed to the media to desist from any “further spreading fake news and also urged people not to be carried away by such unreliable news coverage.”

The Believers Church is engaged in many charitable works all across India, including in the slums of Kolkata and Mumbai.

Self-appointed Archbishop K.P. Yohannan, who founded the church in 1993, was unavailable for comment as he is visiting the United States.

Dubbed Asia’s richest evangelizer, Yohannan reportedly has assets worth US$175 million as the head of the Believers Church and Gospel for Asia, a trust.

The church now has branches in Kerala and several other states.