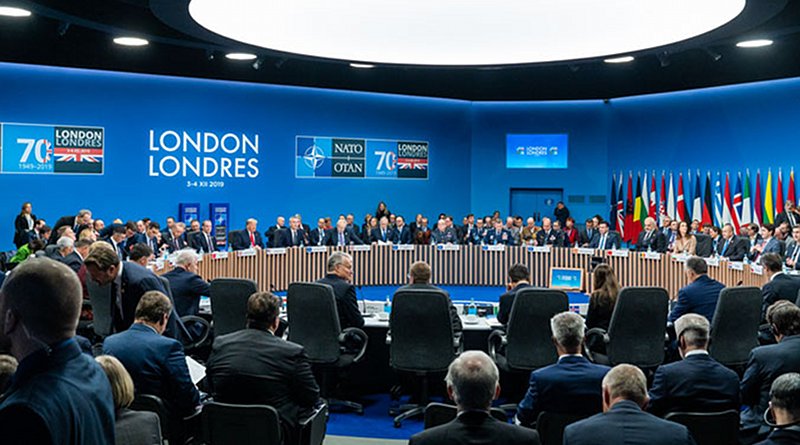 The North Atlantic Treaty Organisation (NATO) which recently held its Summit on completion of 70 years of existence presented a spectacle of inherent contradictions in its ranks while at the same time in the Summit Statement defining a new strategic challenge in the form of China. It remains to be seen whether NATO remains focussed on the ‘China Challenge’.

NATO as a military organisation is the longest surviving military alliance in the world. It came up soon after the end of World War II when alarmed by then Former Soviet Union which also was part of the global effort to defeat Nazi Germany, had started consolidating its hold on countries of Eastern Europe by installing Communist governments. The Cold War that then set in witnessed congealed lines of military confrontation between Soviet Union- led Warsaw Pact and NATO which emerged as the US-led military alliance of West Europe countries who were Allies in World War II against Hitler’s Germany.

NATO’s moves in Eastern Europe were seen as “NATO Creep” towards hemming in of the much shrunken successor state of Russia. Analytically, this can be asserted as Russia forging a Strategic Nexus with China in terms of balance of power strategies.

In tandem with the above, NATO for the first time embarked on “Out of NATO Area Operations” in Afghanistan in support of United States military intervention in Afghanistan in 2001 following 9/11 bombings of Homeland USA by Islamic Jihadis. This was a significant departure from NATO’s earlier primary role of defence of Europe against the Soviet threat.

Significantly, NATO could be said to have acquired a global role as against an earlier Europe-centric military organisation. Was this a precursor of NATOs enlarged role in decades to come or was the Afghanistan NATO involvement just a one-time military operation by NATO?

In 2019 the picture is that while NATO continues having enlarged its military presence in Eastern Europe, whereas in parallel, Russia and China  too have added more substance to what was an earlier only a Strategic Nexus to contours of  a strategic alliance going by the intertwining of military, economic and technology linkages. The Shanghai Cooperation Organisation was set up by China and Russia as a rival organisation to NATO but not with formalised military structures/mechanisms like NATO.

NATO for the first time defining China as a strategic challenge, though muting it with also terming it as offering economic opportunities, has arisen basically from China’s burgeoning military rise and economic penetration of Eastern and Southern Europe after having overwhelmed Central Asia. China’s enunciation of its Maritime Strategy 2015 which envisioned China’s ambitions to project its maritime influence in ‘distant seas’ to be read as Eastern Mediterranean Sea to begin with.

China has also been engaged in penetrating the weak economies of NATOs Southern Flank like Greece and Italy with promises of infusion of Chinese economic largesse and extension of the China’s flagship project—Maritime Silk Route.

Against the above contextual backdrop where Russia in a resurgent mode opposite Europe and still a military power of repute with its nuclear and ICBMs arsenal intact and with China‘s incremental strategic creep towards Southern Flank of NATO and in the Middle East, it would be natural for military planners sitting at NATO Headquarters in Brussels to increasingly view China as NATOs new emerging challenge.

Placing oneself in the position of NATOs military plans Staff, NATO would logically also seriously take into account that while Russia with its existing interdependence linkages with Western European Major Powers like France and Germany does not appear to be a potent threat to NATO security but when it comes to China its potential aspirations to emerge as a Superpower challenger to United States is a logical concern. Obviously the United States is the mainstay of NATO military alliance.

In my assessment, one cannot visualise Chinese Ground Forces sweeping towards NATO Heartland but one cannot rule out that any potential NATO-China likely tussles will be in the Indian Ocean and in the South China Sea.

There is yet another dimension that needs to be reflected in the context of NATO and China. As per NATO Charter, an attack on one member of NATO by any country has to be considered as an attack on NATO as a whole. With the ongoing power tussle between United Sates and China where one can assert that another Cold War, this time in the Indo Pacific has commenced, and where short-fuses exist aplenty, an armed conflict is seen as inevitable by many within the global strategic community.

In the eventuality of a US-China armed conflict in the Indo Pacific NATO countries would be obliged as per NATO Charter to militarily side with the United States against China.

NATO Alliance nations did take part in US-led International Security Forces Coalition in Afghanistan in the first ‘Out of NATO Area Military Operations’ for a number of years. There is no reason to disbelieve that in the event of a United States military showdown with China leading to an armed conflict would not militarily side with the United States.

In 2019 differences have arisen within NATO with the United States impatient with NATO Nations not fully meeting their financial commitments to NATO. However these differences are a matter of detail. There does not appear to be any doubts within NATO Alliance about the value of NATO as an essential mechanism not only for security of Europe but further afield too.

Turkey presently seems to be the odd-man out by airing serious reservations presumably arising more out of pique for the European Union not admitting Turkey as a member of the European Union despite being a member of NATO for decades. Resultantly in recent years Turkey has been reaching out to Russia and China. Analytically, one hardly finds any major geopolitical gains accruing to Turkey by ditching NATO.

Concluding, one can visualise that China’s Hard Line policies and strategies in the last few years under Chinese President Xi Jinping has generated strategic concerns on China’s intentions not being benign in areas contiguous to Europe but also in the Indo Pacific Region where Major European Powers have significant economic and strategic stakes. Flowing from NATO’s definition of China as a ‘strategic concern’ indicates that NATO would be keeping China under close watch and scrutiny and formulating contingency plans should concerns on China assume more threatening contours.