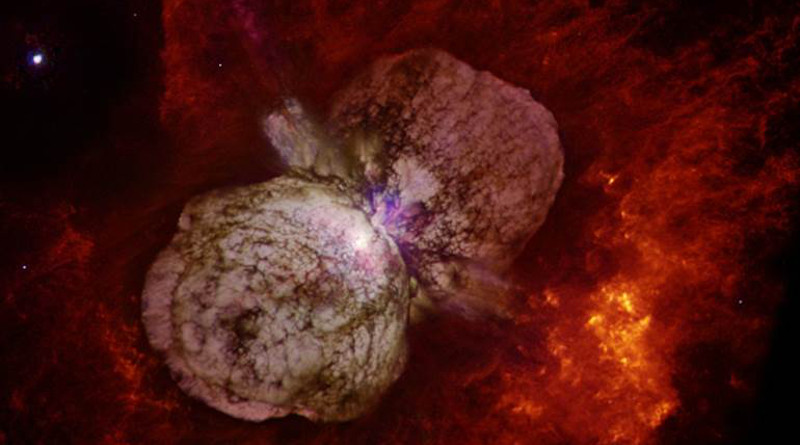 Is it just a powerful burst of energy or a massive explosion — a supernova? With increasing excitement and anticipation, a Malmö University physicist has been following the evolution of one of the Milky Way’s biggest stars — Eta Carinae.

And on February 17, it is hoped that Henrik Hartman and scientists around the world will discover the truth.

Eta Carinae is the name of two stars surrounded by a large and bright gas cloud, known as a nebula. This gas has been ejected in previous explosions. With a space of five and a half years between the stars, they are as close to each other as the Earth is to the Sun. On February 17, the stellar winds collide and the emitted light changes radically, allowing researchers to find out more about the properties of the stars.

“Each time the stars come so close together, they send out additional shells of gas. The stars’ then outermost shell, which was released 170 years ago, is what we now see as the nebula,” says Hartman.

Of the hundreds of billions of stars in the Milky Way, only a handful are the same size as Eta Carinae at this stage. It lies 7500 light-years from Earth in another part of the galaxy, glows a million times brighter than the sun, and emits as much light in six seconds as our sun rays in a full year. Both stars are believed to be over 100 and 30 times larger than the sun.

Prior to February 17, Hartman and the network of researchers were monitoring developments via near-daily observations from telescopes around the world.

”With the help of the light we can find out what the gas closest to the stars consists of. We are interested in the process itself when the light interacts with the atoms, and also the chemical composition of the shells emitted during the explosion.

“The light tells which substances are formed in the heaviest stars and in what amount. It contributes to the knowledge of the chemical development of the universe,” says Hartman.

The variation in light makes the star a unique laboratory, where the Malmö researchers study atoms under conditions we cannot recreate on earth. The researchers also want to study how stars develop in the final stage. It is known that large stars with cosmic dimensions do not live that long — a few million years — while the sun is already over four billion years, and Eta Carinae is in the final phase.

“We do not know how big the outbreak will be this time, but sometimes a star’s life ends, and it collapses. Since the time scale is long, we do not know when Eta Carinae will finally explode, but it is soon. In the Milky Way, a supernova happens about every hundred years, so it would of course be very exciting to experience,” adds Hartman.