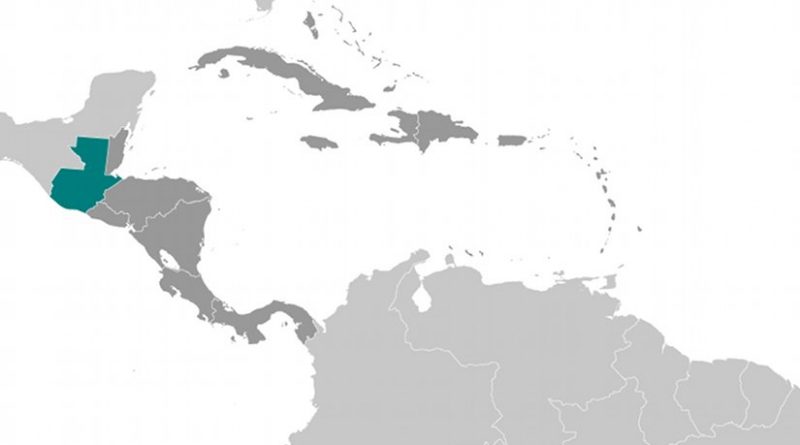 On the morning of Mar. 19, the town of Santa Eulalia, tucked away in the Cuchumatanes mountain range in the northern department of Huehuetenango, was buzzing with anticipation. Locals had gathered in front of the town hall to demand the re-opening of the Snuq Jolom Konob community radio station, which had been closed by mayor Diego Marcos two months earlier.

Created in 2000, Snuq Jolom Konob means “head of the people” in the Mayan Q’anjob’al language, a reference to a giant pre-Columbian monolith sculpture that exists in the area, of which only the head remains. Since it was created, Snuq Jolom Konob had broadcast from the municipality’s premises.

Staffed by indigenous volunteers, the station broadcasts in Q’anjob’al and has played a vital role in terms of saving this Mayan language — spoken by almost 100,000 people in the towns of San Pedro Soloma, San Juan Ixcoy, Barillas and Santa Eulalia — from extinction.

It has also allowed the Q’anjob’al community to voice its opposition to the construction of a hydroelectric dam on the Cambalam River that has led to the displacement of local families. In 2011, the administration of President Otto Pérez Molina granted Hidro Santa Cruz, a subsidiary of Spanish corporation Hidralia Energía, a license to build the dam without obtaining local communities’ prior and informed consent, in accordance with International Labor Organization (ILO) Convention 169 on Indigenous and Tribal Peoples.

The murder of community leader Andrés Francisco Miguel by armed security guards employed by Hidro Santa Cruz in May 2012 sparked off a series of protests throughout northern Huehuetenango that were met with heavy-handed repression from the central government.

President Pérez Molina, a retired army general, declared a state of siege in Barillas, suspending constitutional rights and placing the army in control of the area. In scenes reminiscent of the army’s onslaught against indigenous communities during Guatemala’s 36-year-long civil war, soldiers and police raided the town, kicking down doors without search warrants and threatening women with rape.

Nineteen community leaders were detained and taken to a high-security prison in Guatemala City, charged with crimes ranging from armed robbery to terrorism. Some were eventually released due to lack of evidence after being unjustly imprisoned for up to 150 days and others are still awaiting trial.

According to Human Rights Ombudsman Jorge de León Duque, the detainees’ fundamental human rights were violated because they were not informed of the reason they were being imprisoned and they were not allowed access to translators even though they were Q’anjob’al speakers.

Political prisoners
Under the climate of repression that the Q’anjob’al community has endured since Hidro Santa Cruz was granted the license to build the dam, Snuq Jolom Konob was its only remaining means of voicing discontent and planning resistance activities.

The station played such a vital role in the community that when the mayor of Santa Eulalia, who belongs to the opposition Lider party and is in favor of the dam, forcibly shut it down on Jan. 20, the people of Santa Eulalia were willing to lay down their lives in order to defend it.

During the confrontation between the townspeople and municipal employees that ensued, 20-year-old Pascual Basilio Pascual Diego was shot dead. His father, Domingo Antonio, and other eyewitnesses, said that the mayor, under the effects of liquor, drew his gun and shot him. The victim died in hospital two months later.

“The attacks on the radio have occurred in a context of permanent aggression by the state against our ancestral people, which have organized in the defense of water resources, mountains, Mother Earth, the forests, life itself”, says Rigoberto Juárez Mateo, one of the leaders of the Plurinational Authority of the Q’anjob’al, Chuj, Akateko, Poptí and Mestizo People of Huehuetenango.

With the September elections looming, Juárez fears that these repressive actions against community leaders will intensify and will be disguised as political violence.

On Mar. 24, four days after he was interviewed by Latinamerica Press, Juárez and another Q’anjob’al leader, Domingo Baltazar, were arrested without a warrant by two police agents in Guatemala City, after they traveled to Guatemala City to meet with human rights organizations that are documenting the human rights violations committed against their community. During the incident, lawyer Ricardo Cajas was physically assaulted by the two agents when he demanded that they should produce an arrest warrant and read Juárez and Baltazar their rights.

Three days later, they appeared before Judge Otto Felipe Vásquez who set precautionary measures in lieu of remand. However, after they left the courtroom they were detained once again by the police. They are accused of kidnapping and instigating criminal activity, charges which they deny.

Speaking from prison, Juárez told Guatemalan journalist Andrea Ixchiú: “We consider ourselves political prisoners. Even if we are behind bars we insist that our ancestral peoples should re-orient their struggle. Self-determination is the way. There is no other way because the state is not a viable option for us. The state has been built in order to repress our people, to harm us and to steal from us the little resources that we have”.

On the same day that Juárez and Baltazar appeared before Judge Vásquez, and were released and arrested for a second time, the body of q’anjob’al leader Pascual Pablo Francisco was found in the village of Chancolín, in the municipality of Barillas, with signs of torture. The community blames Hidro Santa Cruz for his death and the incident has heightened tensions between the q’anjob’al people, the company and the authorities.

According to the Unit for the Protection of Human Rights Defenders-Guatemala (UDEFEGUA), 657 human rights activists were attacked in 2013, a number that increased to 810 in 2014. This figure — the highest since UDEFEGUA began to record such incidents in 2000 — includes seven murders and 21 attempted murders.

One of the worst cases of violence unleashed by the current government against indigenous protestors was the massacre of eight indigenous protestors from the Northwestern department of Totonicapán. The peasant leaders were shot by soldiers using Israeli-manufactured Galil rifles during a road blockade held in protest against rising electricity prices in October 2012.

“This government has militarized everything and has used force and repression against protestors and social movements”, says Norma Sancir, a reporter for independent news blog Prensa Comunitaria, who was imprisoned for five days in September 2014 for covering a peaceful demonstration in the eastern department of Chiquimula.

Bad journalism
International observers and NGOs have also been targeted. In July 2014, two Peace Brigades International (PBI) observers who attended the violent eviction of a peaceful anti-mining protest in the village of La Puya, located in the municipality of San José del Golfo, 17.5 miles northeast of Guatemala City, were told that their residence permits had been terminated and that they had to leave the country within a week.

Interior Minister Mauricio López Bonilla said the case should serve as a “warning” to all international organizations and accused foreigners of inciting protests and manipulating the local population.

A disturbing trend under the current climate of criminalization of leaders of the social movements has been the fact that protestors and the human rights organizations that support them have been branded as “terrorists” by the Pérez Molina administration, a discourse that has been echoed by right-wing media and commentators.

The expose “Sweden funds terrorists in Guatemala” broadcast by Canal Antigua TV journalists Sylvia Gereda and Pedro Trujillo in March 2012 is a clear example of this. The program accused the Swedish embassy of funding “organizations that promote political instability, terrorism and weaken the state” through cooperation programs that supported civil society organizations in the municipality of San Juan Sacatepequez, 20 miles north of Guatemala City, where indigenous communities have been protesting against the construction of a Cementos Progreso cement factory for the past eight years. At the time, UN Rapporteur for Freedom of Expression Frank La Rue, said the program was an example of “bad journalism”.

The Canal Antigua TV channel is owned by Minister for Energy and Mining Erick Archila Dehesa and critics cite this case a clear example of how mainstream media outlets have been used to echo corporate interests.

“The media is controlled by monopolies and anyone who opposes large scale infrastructure projects that threaten the freedom of the people is branded as a terrorist”, says Sancir.