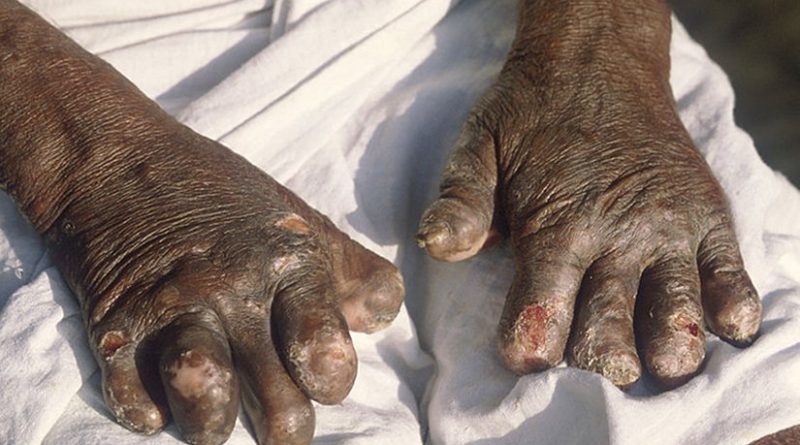 A mutation in an immune system gene rapidly rose in frequency in Southeast Asia approximately 50,000 years ago because it likely conferred protection against leprosy, which spread to the region from Africa around the same time.

The findings, published May 16th in Cell Reports, show that the gene variant, called HLA-B*46:01, encodes a protein that binds to molecules derived from the bacterium that causes leprosy–a chronic infection of the skin and peripheral nerves. This HLS protein then presents these foreign molecules to the immune system, which destroys the infected cells.

“Our study suggests that HLA-B*46:01 may provide protection against severe leprosy because it is better adapted to present pathogen-derived peptide antigens for immunosurveillance by the immune system,” said lead author Hugo Hilton of Stanford University School of Medicine. “The findings may explain why HLA-B*46:01 evolved 50,000 years ago and spread to become one of the most prevalent immunity gene variants in Southeast Asia.”

Population expansion, cultural changes, and migration during the last 100,000 years exposed humans to pathogens against which they had not evolved effective resistance. Due to strong selective pressure, human leukocyte antigen (HLA) genes have evolved to provide immunity against diverse and rapidly evolving pathogens.

“New HLA gene variants, or alleles, are thought to arise in human populations during episodes of Darwinian selection, but there is little direct evidence for the nature of this process,” said senior study author Peter Parham of Stanford University School of Medicine.

One compelling example of such an episode is the HLA-B*46:01 allele, which is now carried by approximately 110 million individuals of Southeast Asian descent. This HLA-B gene variant formed through genetic recombination between its two parent alleles: HLA-B*15:01 and HLA-C*01:02.

“HLA-B*46:01 has since become the most common HLA-B allele in Southeast Asia, suggesting that it fills an immunological niche not afforded by either parent or any other HLA variant found in the region,” Hilton said.

In the new study, Hilton and Parham set out to determine why HLA-B*46:01 rapidly rose in frequency in Southeast Asia over a relatively short period. To do so, the researchers used high-resolution mass spectrometry to compare the peptide sequences presented by the HLA-B*46:01 protein with those presented by its parent alleles. They found that HLA-B*46:01 binds a small, distinct, and less diverse set of peptides compared with its most closely related parent, suggesting that the HLA molecule is specialized to protect against one or a small number of closely related pathogens. Moreover, 21% of HLA-B*46:01 peptides strongly bind to a natural killer cell receptor called KIR2DL3, allowing the HLA molecule to trigger an effective immune response.

Using an algorithm that predicts binding affinities of HLA molecules to peptides, the researchers found that HLA-B*46:01 is predicted to bind a significantly higher number of peptides derived from Mycobacterium leprae–the pathogen that causes leprosy–compared with its most closely related parent. But surprisingly, HLA-B*46:01 is predicted to bind equal or lower numbers of peptides derived from Salmonella Enteritidis, HIV-1, or H1N1-influenza as compared to its parents.

The new findings are consistent with epidemiological studies showing that HLA-B*46:01 carriers are protected against a severe, life-threatening form of leprosy but are more susceptible to other infectious diseases, such as malaria, HIV, and SARS coronavirus. Moreover, this gene variant predisposes individuals to autoimmune disorders such as myasthenia gravis and Grave’s disease, in addition to a rare type of head and neck cancer.

“Taken together, these observations support the notion that HLA-B*46:01 poses an immunological trade-off between protection against leprosy and protection against other diseases,” Hilton said. “This suggests that the selective pressure exerted by leprosy in Southeast Asia must have been a stronger force over the past tens of thousands of years compared with the collective fitness detriment imposed by many other serious diseases in the region.”