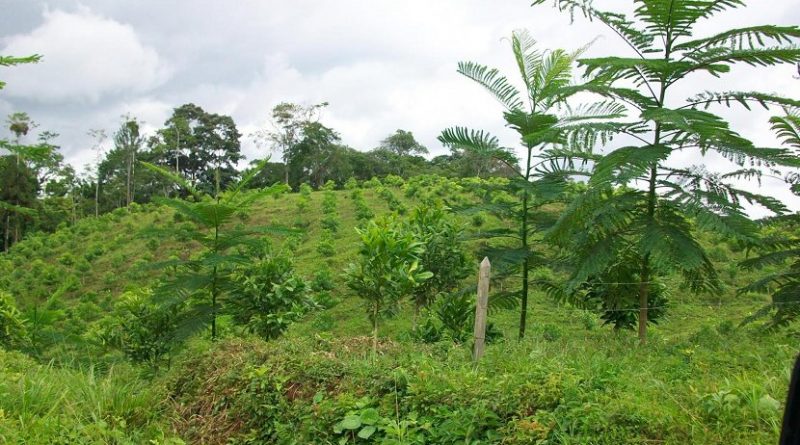 This is a young reforested area in Costa Rica. It is an example of active reforestation techniques, which have been reported as inferior to natural regeneration processes in several high-profile studies. However, a new study critiques previous research, arguing the studies were biased and that active reforestation can also be effective depending on the goals and the site. Credit: Matthew Fagan

When embarking on a reforestation project, is it better to let an area regenerate on its own, or take active steps like planting trees? Recent high-profile research has suggested that natural regeneration is more effective. However, UMBC’s Matthew Fagan and colleagues have just published their own research in Science Advances suggesting those studies were biased, and advocating for a more nuanced approach to forest restoration.

“This paper takes a more critical look at recent papers that have made a big splash,” said Fagan, assistant professor of geography and environmental systems. “I love this paper because it points out an important flaw in several studies, and also because those studies are really important to understanding how best we should restore the planet’s forests.”

So what was the flaw? Leighton Reid, a Missouri Botanical Garden scientist and first author on the new paper, says the studies were making “an apples to oranges comparison.” All of the sites the studies used to measure the effectiveness of natural regeneration were secondary growth forests, but the sites that used human-aided regeneration ran the gamut from abandoned coal mines to fields compacted by years of cattle-grazing. The natural regeneration sites had a leg up on the sites selected for active regeneration, so it’s no surprise the former came out the winner.

The new paper’s authors are not arguing that tree planting is superior to natural regeneration, however.

“We just point out that rather than argue for natural regeneration versus artificial tree planting, it’s often worthwhile to just step back and give natural regeneration a chance for a year or two. It’s free,” Fagan said. “If it fails, then look at your objectives and figure out what sort of interventions you need to do, rather than saying one is better than the other.”

In some cases it makes sense to combine elements from both approaches. For example, planting small clusters of trees, rather than trying to replant an entire site, can sometimes be enough.

“Tree planting can be the sparkplug that gets birds coming into a site, that then kickstarts regeneration,” said Fagan.

Around the world right now, countries are committing to restore millions of hectares of forest, explains Fagan, and with limited resources available for such work, it’s important to understand what the most effective techniques will be. There’s no one easy answer, but “if we want to learn more about which of these different types of restoration works better, we need to do more experiments,” said Fagan.

To date, there have been very few experiments that actually look at the two methods side by side at the same site, which is what’s needed, he argued.

“The main takeaway from our paper is that natural regeneration isn’t a guaranteed success, even in the tropics. Sites can be so damaged by human management that they take a long time to recover,” said Fagan. “So while natural regeneration can be a useful restoration possibility, we shouldn’t necessarily assume that it’s always better for all objectives.” Those objectives could include pulling carbon out of the atmosphere, preventing erosion, filtering air and water, or building up sustainable agriculture, such as shade-grown coffee. “Contrary to previous scientific arguments, planting trees can be a perfectly viable choice.”