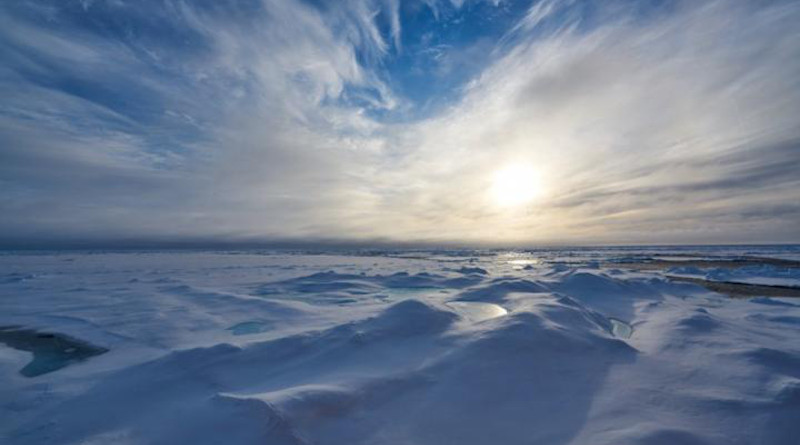 Melting ice in the Arctic Ocean is a bellwether for climate change, an apt illustration of environmental changes in a warming world. CREDIT: Photo courtesy of Zhangxian Ouyang

New research by University of Delaware doctoral student Zhangxian Ouyang and oceanographer Wei-Jun Cai, and an international team of researchers, demonstrates that rapid warming and sea-ice loss have induced major changes in the western Arctic Ocean.

The research team’s findings — published in Nature Climate Change — show that the Arctic Ocean’s ability to remove carbon dioxide from the atmosphere can vary greatly depending on location.

Arctic Ocean sea-ice loss is a critical consequence of climate change. As sea ice continues to melt in the western Arctic Ocean, more fresh water is entering the upper portion of the water in the Canada Basin, which sits off the coast of Alaska and Canada, south of the Chukchi Shelf.

This summertime melt cycle is exacerbating seasonal changes and increasing the amount of carbon dioxide present in the water’s topmost layer, which comprises the upper 70 feet of the water column. This is reducing the basin’s capacity to remove carbon dioxide from the atmosphere.

Prevailing thought, based on data measurements from under the ice and in newly melted ocean margin areas in the 1990s and early 2000s, had suggested that when the ice melted it would allow the Arctic Ocean to draw large amounts of carbon dioxide out of the atmosphere, acting as a carbon sink and helping to mitigate greenhouse gases. However, this may not be the case in all places, particularly in the Canada Basin where summer ice retreat has advanced into the deep basin since 2007.

The research team’s latest findings are based on an analysis of over 20 years of global data sets collected between 1994-2017 by researchers across the United States, China, Japan and Canada. They provide a more accurate depiction of what is happening in this region and build on Cai’s previous work from 2010, which indicated that carbon dioxide levels at the sea surface increase rapidly and unexpectedly toward levels found in the atmosphere in newly ice-free Arctic Ocean basins.

For example, the research team’s work showed that as the ice breaks up and melts in the Canada Basin, this meltwater lays on top of the sea surface, creating a “blanket” of sorts that inhibits the ocean’s ability to absorb carbon dioxide from the atmosphere into the deep ocean and store it there. Cai’s team refers to this phenomenon as a “new normal” that is created by extreme seasonal warming and meltwater in the region.

“As carbon dioxide accumulates in the surface layer of the water from melting ice, the amount of carbon dioxide this area of the Arctic Ocean can take from the atmosphere will continue to shrink,” said Cai, the Mary A.S. Lighthipe Professor in the College of Earth, Ocean and Environment. “We predict by 2030, the Canada Basin’s ability to serve as a carbon sink will be really minimal.”

Additionally, this rapid increase of carbon dioxide content in the basin may have rapidly acidified the surface water, a process that can endanger marine calcifying organisms and disrupt ecosystem functioning there.

In stark contrast, farther south in the shallow Chukchi Sea, the amount of carbon dioxide in the water’s topmost layer remains very low, much lower than what is present in the atmosphere. This means that as air passes over the water’s surface, the sea can more quickly absorb carbon dioxide from the air.

The researchers suggest that this difference is the result of high biological production in the Chukchi Sea due to rich nutrients being transported there on currents coming from the Pacific Ocean since the Bering Strait has opened up due to earlier ice loss. These nutrients enable abundant growth of phytoplankton and other marine organisms that form the base of the marine food web and feed the broader ecosystem. Phytoplankton also consume carbon dioxide dissolved in the water during photosynthesis, allowing more carbon dioxide to be taken from the surrounding atmosphere.

The research team suspects that the Chukchi Sea will become a larger carbon sink in the future and impact the deep ocean carbon cycle and ecosystem, while the Canada Basin likely will remain less so as sea ice in the region continues to melt and change the water chemistry.

According to Lisa Robbins, a retired senior scientist with the United States Geological Survey (USGS) and a co-author on the paper, these changes could have important implications for organisms in the Arctic. For instance, Arctic cod is an important fishery in the western Arctic that contributes to the region’s overall economy and serves an important role in the marine food web as a food source for other organisms, such as Beluga whales and ringed seals. Biologists have noted that as temperature and sea ice melt have increased, Atlantic cod are responding by moving farther north. Changing water chemistry also may be playing a role, said Robbins, who led three expeditions to study the region’s water chemistry in the Arctic aboard the United States Icebreaker R/V Healy while with the USGS.

Long-term data sets, such as those used in this study, are key to understanding and predicting future changes in the Arctic.

“The amount of insight we get from these data sets into how our earth-ocean works is tremendous. If scientists hadn’t collected data in 1994, we wouldn’t have a place to start and compare with,” said Robbins, now a courtesy professor in the College of Marine Science at University of South Florida.

A 2019 article in Wired magazine found that in northern Canada near Greenland, glacial meltwater seems to be aiding watersheds in absorbing carbon dioxide from the atmosphere. While alone it cannot counterbalance the amount of carbon dioxide in the atmosphere due to carbon emissions, it is an important illustration that the changes aren’t uniform and the subsequent effects — positive and negative — are the result of a complex combination of multiple different drivers. Further research and more international collaborative efforts can help to answer challenging unanswered questions.

As sea-ice loss accelerates, the researchers expect these seasonal variations will cause the ocean water in the Canada Basin to have high levels of carbon dioxide and become increasingly acidic. This will further reduce the basin’s capacity to take up carbon dioxide from the atmosphere and potentially reduce its capacity to mitigate climate change.

While this problem might seem very far away from Delaware, it’s important to remember that the ocean is one global system with circulation currents that transport water around the world, even to the Atlantic Ocean on the East Coast. And greenhouse gases are a global issue.

Understanding how fundamentally important ice melt is to driving carbonate chemistry and seasonal changes in carbon dioxide in this region of the Arctic Ocean will help advance the science in this area, maybe not immediately but over the long-run, said Cai.

“We are trying to understand the processes at work and if the Arctic Ocean will continue to be a large carbon sink, while providing data that can help Earth systems modelers to predict global changes to the carbon cycle, and the ocean’s biology and water chemistry,” Cai said.

Home » A Carbon Sink Shrinks In The Arctic