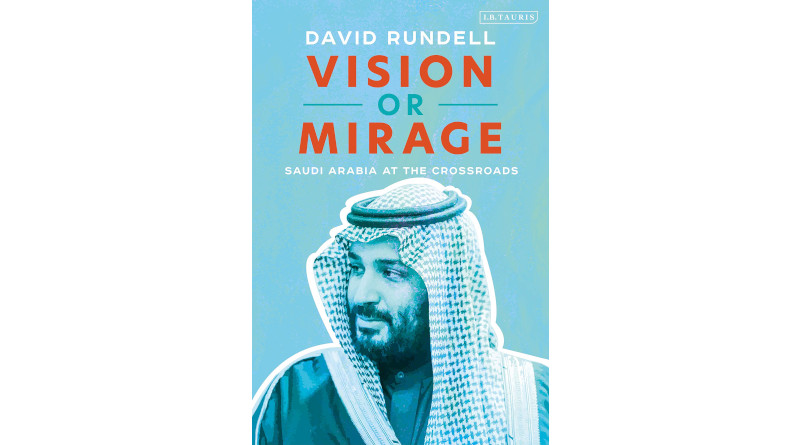 "Vision Or Mirage: Saudi Arabia At The Crossroads," by David Rundell

When hearing the terms “women’s rights” or “corruption crackdown”, most people won’t think of Saudi Arabia.  However, change is the only constant and that truism currently holds in the world’s sole theocratic monarchy.  The main catalyst for this recent change is Vision or Mirage: Saudi Arabia at the Crossroads’ bearded cover model, Crown Prince Mohammed Bin Salman (MBS), under the guidance of his 84-year old father, King Salman.

However, author David Rundell spends much of the book relating the formative years of Saudi Arabia, to establish the parameters for judging the kingdom today.  Vision or Mirage relates in captivating detail how Abdulaziz ibn Abdul Rahman (aka Ibn Saud) used a combination of piety, pragmatism, brute strength, mercy, charisma, diplomacy with the US and UK, and foresight to unite most of central Arabia’s nomadic tribes and coastal cities into a nation named after him.  One of the key alliances he made were with the Wahhabi (fundamentalist Sunni sect from central Saudi Arabia) ulama.  The ulama-adjacent Ikhwan militia gave Ibn Saud the muscle to win battles across central Arabia and thus unite the land.  Ironically, the Ikhwan’s puritanical absolutism led the Ikhwan to become bloodthirsty to the extent that Ibn Saud had to eventually destroy them to restore order, at the Battle of Sabillah in 1929.  The Sauds’ having to face a fundamentalist Frankenstein of their own making would become a recurring theme in history.

Ibn Saud was far more agreeable than the Ikhwan and used his diplomatic skills to win new tribal allies and placate tribes that he had defeated, forming an eventually nation-scale tribal alliance.  David Rundell notes that, “This explicit avoidance of promoting one dominant tribe distinguishes modern Saudi Arabia from many postcolonial African and Middle Eastern states in which tribal or sectarian affiliations still dominate politics.”  He was a believer in giving second chances and the sacred bond of oral agreements, to the extent of potentially endangering his power.  This included negotiations with the British Empire, who very early on saw the benefits of supporting Ibn Saud, so as to sabotage the waning Ottoman Empire and bring stability to a traditionally lawless region.  Luckily, his optimism gamble paid off and the united nation of Saudi Arabia was founded on Sep 23, 1932.

The pragmatism of Ibn Saud continued once he had become a head of state.  He deftly juggled the pious demands of the ulama with the need to import modern technological and governmental innovations.  As a man ruling a land with a long history of clan-based nepotism, he allowed his underling relatives to establish patronage networks, but also made sure not to let the corruption reach the dangerous level that it did in other oil fiefdoms, like Nigeria and Angola.  Likewise, Ibn Saud instilled a culture of cohesion and meritocracy in the royal family by establishing an agreeable hierarchy, which included a succession system that factored in competence, instead of just blanket primogeniture.  Lastly, he copied his British alliance ploy with the United States in a famous meeting with President Roosevelt on a US warship at Great Bitter Lake, as America was steamrolling towards global supremacy at the tail-end of WWII.  The Saudi-US alliance, which has subsequently become very controversial in the latter nation and which was considered heretical by the “anti-Western infidel” Saudi ulama at the time, has lasted nearly a century and played a key role in the meteoric rise of the Saudi dynasty.

Vision or Mirage then documents the reigns of Ibn Saud’s successors: Saud, Faisal, Khalid, Fahd, Abdullah and Salman.  The latter sections of the book are dedicated to the rapid changes wrought by the currently reigning King Salman and how they will affect the short- to mid-term future of the country.  Most notably, he allowed his unaccomplished young son Mohammed (MBS), to leapfrog over many more senior and experienced royals into the position of Crown Prince.  This is part of a wider process of wrangling the royals.  King Salman has rapidly scaled back privileges for the tens (possibly hundreds) of thousands of great-grandchildren and great-nephews of King Abdelaziz.  Their stipends have been greatly shrunk and they have had reduced their lucrative construction contracts, legal privileges and government positions.  In regards to the latter, King Salman replaced nearly every minister and military service chief from a prince to a technocrat.  The princes who’ve been allowed to keep their jobs have disproportionately been those most closely related to Salman.

King Salman and MBS have been similarly disruptive in terms of social reform.  MBS has repeatedly lamented how the 1979 seizure of the Grand Mosque by armed fundamentalist-Muslim cult members resulted in a vast increase in conservatism in Saudi Arabia.  The current regime has substantially curtailed the authority of the religious police, allowed the opening of previously banned public entertainment venues like movie theaters, increased the opportunities for public participation by women (including by building the all-female Princess Noura University) and reduced restrictions on non-Wahhabi citizens.  Take for instance this factoid: “In 1960 girls could not go to elementary school, yet in 2020 they comprise 60% of university graduates.”  However, Rundell isn’t blindly cheerleading for MBS; he also points out instances of where human rights in S.A. have stagnated or even regressed, including, most starkly, mass executions of peaceful activists.

Economic reforms are also put under the microscope.  The millennial MBS is dreaming big in many ways, including by sketching out plans for a futuristic smart-city called NEOM, and by privatizing parts of the economy (which has faced some quiet criticism from the technocrat class).  Oil has obviously been the predominant fuel for the Saudi economy for most of its history.  This commodity has also given S.A. a role in the global economy vastly disproportionate to its population.  Saudi Arabia has the unique ability to drastically increase oil production to sink oil prices, due to its massive reserves; though in the 1973 Arab Oil Embargo, it did the opposite.  Thus, he who controls Saudi’s Aramco national oil company has the potential to extort energy importers, punish oil-producing competitors who act out of line, and shape trends in energy consumption.  In general, the Saudis prefer to keep oil reasonably priced, for extended periods of high oil prices encourage consumers and industrialists to make more environmentally friendly choices that would hurt oil’s long-term viability.  Being so reliant on oil for revenue makes Saudi Arabia vulnerable to global swings in oil prices; as the book notes: “Between 2007 and 2011 oil prices doubled, halved, and doubled again in four years.”  MBS has put forth an economic diversification plan in his Vision 2030 Initiative.  Rundell explores the potential, pitfalls and implications of the plan.  Worth noting is that the Saudi currency is pegged to the USD.  Unless that practice is ended, Saudi Arabia won’t be able to control its monetary policy.

Many other fascinating tidbits about Saudi Arabia are shared in the book.  For instance, Saudi Arabia has no legislative branch, for the law of the land is God’s Law (the Sharia).  Terrorism and counterterrorism are discussed.  The theological roots of anti-Shia sentiment and their results on Saudi-Shia relations are explored.  This schism has global geopolitical resonance, with the Saudi’s proxy war with Shia Iran in Yemen.

Vision or Mirage: Saudi Arabia at the Crossroads is a book that will prove incredibly illuminating to the average Westerner, who probably only thinks of sexism, theocracy and oil when he thinks about Saudi Arabia.  Rundell uses history, theology, politics, economics and sociology to explain the current complexities and challenges of the Arabian Peninsula’s most dominant nation.  We, the Western reader, learn to empathize with people with a vastly different way of life than our own.  The book also contains some helpful maps and photos capturing snapshots of Saudi cultural history.  My only criticism is that the book is too flippant in dismissing the extensive evidence connecting the Saudi government to the 9/11 attacks… Most notably multiple links pointing to Prince Turki al-Faisal, who was head of the country’s intelligence agency for 22 years, before retiring 10 days before 9/11.  Instead, the author merely points to the heavily redacted 9/11 Commission Report, which was excoriated by Democrats and Republicans alike for the extent and nature of the material that was censored, and moves on to another subject.  With that caveat stated, I would recommend this book to anyone who wants to learn about Middle Eastern history, or who  wants a rubric for thinking about its economic and political future.