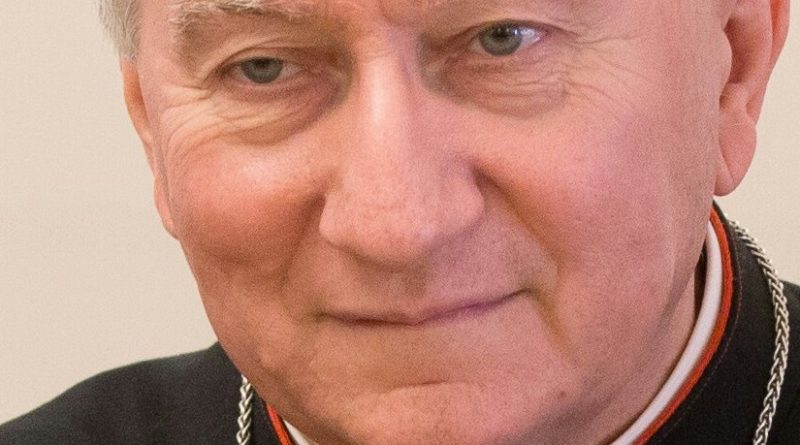 In wake of Friday’s violent terror attacks in Paris, the Vatican’s Secretary of State said that while the small country is also on extremists’ horizons, they won’t let themselves be “paralyzed” by fear.

He also backed global military action against ISIS militants, who claimed responsibility for Friday’s attack, by echoing Pope Francis’ declaration in August 2014 on his way back from South Korea that “stopping the unjust aggressor is legitimate” when it comes to international intervention in Iraq.

“What happened in France highlights the fact that no one can consider themselves excluded from (the threat of) terrorism,” Cardinal Pietro Parolin told French paper La Croix in an interview published Nov. 15.

“The Vatican could be a target because of its religious significance. We are capable of increasing the level of security in the Vatican and the surrounding area. But we will not let ourselves be paralyzed by fear.”

Cardinal Parolin’s comments come after Islamic terrorists carried out a series of attacks in Paris Nov. 13, killing at least 120 people and leaving more than 350 others injured, 99 of whom are in critical condition.

Numerous reports note that a video released by ISIS following the attacks said other member-countries of the U.S.-led military coalition against them in Iraq and Syria could be next on the list of targets.

Among the locations threatened with attacks similar to those in Paris were London, Washington, Rome and Iran.

Though Pope Francis is likely the biggest target in Rome and the Vatican City State, Cardinal Parolin said that the pontiff won’t let fear deter him from moving forward. “These events don’t change the Pope’s agenda at all,” he said.

He referred to the Pope’s Nov. 14 comments the day after the Paris attacks, in which Francis referred to them as part of “a piecemeal third world war.”

The cardinal explained that “piecemeal” refers to a war “that has not been declared, an asymmetric war. A war fought away from the battlefields, in which the victims are innocent young, adult and elderly people.”

It also means that “we do not know where the next incident is going to take place,” he said. After Paris, “Daesh shockingly warned that this was only the beginning. Everywhere, these are acts of terrorism linked to Islamist fundamentalism.”

When asked if the Holy See takes Pope Francis’ stance that “stopping the unjust aggressor is legitimate” when it comes to ongoing airstrikes in Syria, Cardinal Parolin said “yes, because blind violence is intolerable, whatever its origin may be.”

Pope Francis voiced his support for international intervention in Iraq while on board his flight from Seoul, South Korea to Rome Aug. 18, 2014.

“In these cases where there is an unjust aggression, I can only say that it is licit to stop the unjust aggressor,” Pope Francis told reporters.

“I underscore the verb ‘stop.’ I don’t say ‘to bomb’ or ‘make war,’ (but) ‘stop it,’” he said in response to the question, posed by CNA and EWTN News Rome bureau chief Alan Holdren.

Parolin explained that Francis wasn’t saying anything new, but was quoting the Catechism of the Catholic Church, which states in paragraph 2308 that while “all citizens and all governments are obliged to work for the avoidance of war,” governments “cannot be denied the right of lawful self-defense” when the danger of war persists, there is no international authority with the necessary competence or power, and when all efforts for peace have failed.

“For this reason, those who legitimately hold authority also have the right to use arms to repel aggressors against the civil community entrusted to their responsibility,” Cardinal Parolin said.

Promulgated by St. John Paul II in 1992, the Catechism serves as a summary and outline of the teachings of the Catholic Church.

In paragraph 2309, the catechism lays out the “strict conditions” under which military force is a legitimate response for self-defense, and which constitute part of the Church’s “just war” doctrine:

Cardinal Parolin said that these conditions also correspond “to the legitimate defense of a State within its borders to protect its citizens and repel terrorists.”

“In occasion of a foreign intervention, it is necessary to seek out legitimacy through the organizations which the international community has given itself,” he said, clarifying that the role of the Holy See “is to remember these conditions, not to specify means to stop the aggressor.”

In his August 2014 comments, Pope Francis also stressed the catechism’s point that the means of stopping violence must be evaluated and that the violence cannot be used as a pretext for other goals.

In his interview with La Croix, Cardinal Parolin said that “there is no justification for what happened” in Paris, and that a global mobilization of forces is needed in response.

“A mobilization of all means of security, of police forces and of information, to root out this evil of terrorism,” he said, and noted that this would also include spiritual resources, in order to provide “a positive response to evil.”

This response will come about through educating people on the importance of refuting hatred, and offering answers to youth that leave home to join jihad activities.

People at every level of society ought to be involved in this education, he said, including those in both the political and religious spheres, as well as nationally and internationally.

“There is a great need to combat this together. Without this union, this difficult battle will not be won.”

Pope Francis has previously voiced his opinion on dialoguing with extremists in order to reach some sort of agreement, saying that while difficult, it’s possible.

Speaking to journalists in-flight on his way back from Strasbourg Nov. 25, 2014, Pope Francis said it’s important to “Never give up anything for lost, never.”

“Possibly you can’t have dialogue but never close a door,” the Pope said. Although dialogue might be challenging – “you could say almost impossible” – the “door is always open, no?”

Cardinal Parolin isn’t quite as optimistic. He told CNA Oct. 29 that “I don’t think it’s possible” to dialogue with fundamentalists.

Dialogue, he said “is done with the small talk (between those) who enter into a relationship, no? So interventions here are not at all reasonable with those who refuse to dialogue.”

“I don’t think that it’s possible to dialogue with fundamentalists. One can offer to dialogue, but I don’t see many opportunities of establishing a dialogue.”

However, while dialogue with extremists might seem unrealistic to the Vatican’s secretary of State, he told La Croix that ordinary Muslims must be involved and included in the community, and that they too “must be part of the solution” to terrorism.

This is especially true in the context of the upcoming Jubilee of Mercy. “In this world torn by violence, now is the right time to launch an offensive of mercy,” the cardinal said.

He said that feelings of revenge are natural after attacks such as those in Paris, but stressed that “we must fight against this urge.”

“The Pope wants the Jubilee to help people see eye-to-eye, understand one another and overcome hatred. After these attacks, this goal is strengthened. We receive the mercy of God to adopt this attitude toward others.”

Cardinal Parolin pointed to the Muslim name for God “The Merciful,” and said it is “the most beautiful name” they have given him. He expressed his hope that Muslims would also be involved in the Holy Year, which is an explicit wish of the Pope.

Home » Cardinal Parolin: ‘Vatican May Be Target, But We’re Not Backing Down’