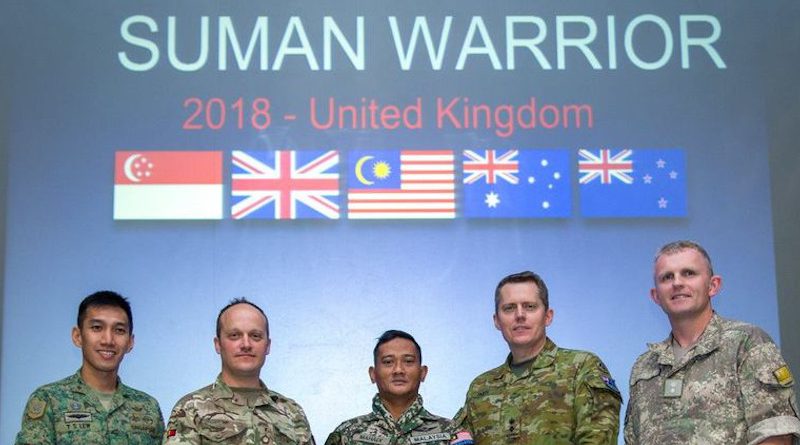 The Five-Power Defense Arrangement could be perceived as a post-colonial pact of ex-British colonies but particularly for the defense of Malaysia and Singapore born in the era of British withdrawal from South East Asia and in the context of Indonesian confrontasi towards Malaysia.

Little is written in the press and media of the operations of this Arrangement except for announcements of exercises between these partners. They seem to meet in secret compared to the amount of news of NATO in the European press and media. It appears dormant in absence of news of it. However, one can meet Australian and New Zealander armed forces personnel in their shopping trips in the supermarkets of Penang. The headquarters of the Arrangement’s Integrated Area Defence System is at the former Royal Air Force and former Royal Australian Air Force air base which is now Malaysian in Penang State. Does Malaysia and Singapore need this Arrangement anymore? Aren’t they in a position to defend themselves up to a certain point? Is another reason to prevent them to be at loggerheads? Is it anachronistic?

Anachronistic perhaps. Singapore and Malaysia became founding members of ASEAN, an anti-communist regional grouping with an economic content but still nevertheless with security underneath it. Over time, heavy investment in ASEAN in time, money, human resources, expertise, confidence-building measures among members, the security dimension appeared. It appeared with ZOPFAN, TAC, SEANWFZ, DOC, COC but concretely with the ARF with world-wide participation, the ASEAN Defence Minister’s Meeting (ADMM) without any aim of a defence pact but with practical cooperation programmes among the militaries of ASEAN Member States (the joint patrols of the navies of Singapore, Indonesia and Malaysia of the Singapore and Malacca Straits against piracy is an example), the ADMM + (Australia, China, India, Japan, New Zealand, ROK, Russian Federation and the United States).

With these institutions, very concrete cooperation : fighting corruption; maritime cooperation (maritime safety and search and rescue); conflict prevention/confidence building measures; preventive diplomacy; peacekeeping operations and post-conflict peace building; humanitarian assistance; disaster management and emergency response; humanitarian mine action; military medicine; cyber security; combating transnational crimes and other transboundary challenges, counter-terrorism. All these help to build confidence in one another and prevent war and build peace, security and stability. But nothing in the direction of defence.

When one thinks of all these and involving this wide range of partners which includes potential adversaries, should not the 5-power Defence Arrangement be disbanded?

Hesitation? Perhaps the Arrangement finds its relevance today when one thinks of the South China Sea dispute and growing tensions between China and the US who are supposed to be partners of ASEAN. In fact, with existing cooperation between ASEAN militaries, could not the ADMM decide to go for an ASEAN Defence Pact? Hesitation too? Potential internal divisions for this between mainland ASEAN members and peninsular and archipelagic members.

In the meantime, there has been new armed purchases including submarines and a kind of mini-arms race among ASEAN countries with the poorer ones behind.

Could Malaysia ever invoke this Arrangement if she ever comes to face-to-face confrontation with China over its South China Sea claim? This will put Singapore in a difficult position particularly. As to other three partners, a question mark. They could be drawn into a confrontation with China in defending Malaysia. Has it ever entered into the Chinese calculation? Malaysia has so far been low-key on her dispute with China but from time to time voice her claim. Low-key because also the dispute is out of sight in the Malaysian press and media and appearing from time to time. Always denials of intrusions or Chinese ships have left the area, the talk of warships staying out of the Sea, talk of peaceful settlement. Playing up more of her long standing relations with China, the first to re-establish diplomatic relations in South East Asia in the old ASEAN while Singapore, the last. Today China is one of its biggest investors if not the biggest and so more careful, more low-key? Together with her ASEAN partners banging on the COC negotiations which has been dragging on for years when considering from the time of DOC. Perhaps going faster now with the change of the US position. China in a hurry now.

So, the 5-power Defence Arrangement remains a quiet insurance policy perhaps more for Malaysia than Singapore which probably has the strongest armed forces even as a message of deterrence to her neighbours while partnering the US as an added insurance policy.

*Paul Joseph Lim is a retired Professor who from time to time decides to write on an issue. His past area of research has been the European Union’s relations with Asia and Asian countries specifically S.E. and North East Asia. He was in research and advising on Asia in Brussels, teaching in Malaysia and research in Taiwan.