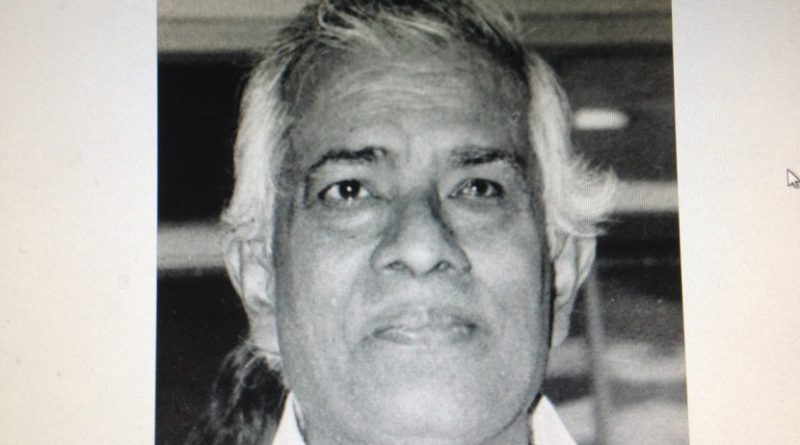 The Indian Association for Radiation Protection (IARP), an affiliate of the International Radiation Protection Association is organizing a five-day (January 16-20, 2018) International Conference on “Developments towards Improvement of Radiological Surveillance at Nuclear Facilities & Environment ” (IARPIC-2018) at the DAE Convention Centre, Anushaktinagar, Mumbai, India.

IARP held a special session to mark the Birth Centenary year celebrations of Dr. A. K. Ganguly, an outstanding scientist, an erudite scholar, and a dedicated teacher who mentored a generation of Indian scientists and established health physics as an interdisciplinary field in India.The organizers of the conference released an eminently readable book titled “Anil Kumar Ganguly and The Evolution of Health Physics Science in India, Compendium of Memoirs” and the album “Nostalgia of footprints of Dr. A. K. Ganguly” compiled and edited by Dr M R Iyer.

The book vividly describes the humongous contributions of Dr Ganguly. He easily spotted the talented among those who worked with him. M R Iyer, D V Gopinath, C W Sunta, K C Pillai, S. Krishnamony, A R Sundararajan, K S V Nambi and dozens of others he mentored and trained , occupied high official positions in the Department of Atomic Energy(DAE) and the Atomic Energy Regulatory Board (AERB).

Dr Homi J Bhabha, with the whole- hearted support of Pandit Jawaharlal Nehru, the first Prime Minister of India prepared a road map for India’s atomic energy programme in 1954. He recruited a few, dedicated scientists to operate the programme. Dr Ganguly, a radiation chemist, was working as a Research Associate at the University of Notre Dame in USA when Dr Jagdish Shankar, an emissary of Dr. Bhabha invited him to join the erstwhile Atomic Energy Establishment Trombay (AEET) in 1956.

Dr. Ganguly was over all in charge of enforcing safety provisions in the installations owned and operated by the Department of Atomic Energy (DAE). He led teams of health physicists into mostly new and unchartered territories and prescribed limits for radioactive releases from various installations or for radiation levels at occupied areas, which ensured protection of workers, members of the public and the environment. He used the best available experimental data and appropriate safety factors in line with the international norms.

It will be a thrilling, exhilarating and inspiring experience to find out how he guided young scientists in totally objective experiments to generate primary data. A typical example: During late 50s,he led a team of about 60 young researchers to carry out an experiment to estimate the possible dilution factors provided by tidal waters in Trombay bay. This was necessary to prescribe the permissible limits for the discharge of various radioactive materials into the bay.

He ensured the setting up of well-equipped Environmental Survey Laboratories (ESL) away from major nuclear installations to monitor air, water and various environ mental matrices. ESLs collect and assess radioactivity in samples of water, sediments, foodstuffs etc. This work starts an year or so before the nuclear installation starts operation.

While on visits to various nuclear installations, he looked for research topics and unsolved safety issues, organized discussions with his colleagues and suggested improvements and goaded his followers to excel in performance. He had unwavering commitment to safety. He never compromised.

Dr. Ganguly the “regulator” had occasional conflicts with Dr. Homi Sethna, the “promoter” of India’s atomic energy programme. After arguments and debates, they settled issues over a cup of tea. The value of that tea was inestimable. If only, those occupying the highest echelons of officialdom accepted the sober and dignified approach of HNS and AKG in these difficult times!

The Bhabha Memorial Lecture titled “Bases for Protection against Radiation and Conventional Hazards“, he delivered at the Annual Conference of the Society of Nuclear Medicine (October 29-31,1977, Trivandrum) highlights his philosophical and practical approach to safety

Historically, two different groups of scientists handled the radiation protection activities in India. While the health physics division looked after radiation safety in the DAE installations, the erstwhile Directorate of Radiation Protection(DRP) set up in 1963 enforced radiation protection in medical, industrial and research institutions handling radiation sources outside the DAE. The safety issues faced by the non-DAE installations were very different .

During late 1972, there was a change in the organizational set up for radiation protection. Dr Ganguly formally reviewed the activities of DRP. Some of us felt that he was a bit harsh! He readily realized that finger- pointing at senior levels of management would have a debilitating and devastatingly demoralizing effect on young minds.

He appreciated my presentation on the special problems in enforcing safety in medical radiation procedures. The way Dr Ganguly handled the situation made a lasting impression on me. Over 38 years Iater, when the Indian Association for Radiation Protection chose me for the Dr AKGanguly Oration Award -2010, I spoke on “Safety in medical radiation procedures: developments over the past four decades”.

Shri V G R Subramanian who specialized in the safety and regulatory aspects of industrial applications of radiation recalls how Dr Ganguly reacted to a message from Shri Krishnamony who was then stationed at Tarapur. Krishnamony wrote about the unsafe work practices being adopted by a private radiography agency at Tarapur despite his warnings. Dr Ganguly ordered a surprise inspection of the agency. Based on the report, he ordered the immediate suspension of radiography operations by the agency not only at Tarapur but also at various others sites (more than 10 sites throughout the country). He ordered the inspection of all sites. Dr Ganguly lifted the ban only after the agency implemented the safety provisions. AKG asked the concerned officers to organize appropriate training programmes for radiographers at various locations in the country.

The Radiation Protection Rules 1971 was very general and needed strengthening for more effective implementation. Dr Ganguly supported the move to draft appropriate subordinate legislation. Later, the competent authority under the rules issued a gazette notification titled “Radiation surveillance procedures for industrial gamma radiography- 1980” to strengthen the rules. This helped the Atomic Energy Regulatory Board to win a few cases filed against AERB, which started enforcing the rules.
Dr Ganguly was the first Chairman of the AERB’s Advisory Committee for Safety Research Projects and Programmes. I served the committee as the Member Secretary. Initially, we held a meeting of all senior officers in DAE to prepare a blue print for the programme. Dr M R Srinivasan, Shri S K chatterjee,Shri S K Mehta, Dr Kakodkar among others attended the meeting. There were detailed presentations.

“Dr Srinvasan, Give them money” That was all what Dr Ganguly said. For the first time, I realized how plain speaking could be the most eloquent!

In the company of Dr AKG, you do not know how time flies by. Once, while travelling together, I told him about a peculiar observation on “Fluorosis”. There was a report that many south Indians staying in Fluorosis endemic areas are not adversely affected by Fluoride poisoning. The apparent reason was that they consume lot of tamarind juice through “Rasam” and “Sambar”.

“Tamarind juice contains tartaric acid, which will form certain complexes with elements such as fluorine, rendering it non-absorbable in our gastro intestinal tract”, he explained. I hope I am reproducing his views correctly.

The interpersonal relationship between AKG and his disciples like Dr Gopinath (DVG) is difficult to explain. To appreciate it, You have to see it at close quarters! Once I had such an opportunity. We assembled at Kalpak am for one of the meetings of AERB committee for safety research programmes. It was AKG’s first visit to Indira Gandhi Centre for Atomic Research(IGCAR).

After dinner, I accompanied AKG and DVG.I had nothing to contribute as they were discussing some metaphysical phenomena! Imagine the scene, Three individuals standing in the middle of the road, two of them loudly talking and trying to convince each other on some astrological observation!

DVG suggested that they would go to Shri A R Sundarajan’s residence to settle the issue. I felt embarrassed at gatecrashing into a residence at such an unearthly hour. DVG waived me off. He said that Shri Sundararajan’s father -in- law is very knowledgeable in the field and can settle the issue. Mercifully we did not go, as the mutually agreed referee was out of station.

I owe AKG a great deal. I would not have started science journalism as a hobby in 1977 if he did not support me. For serving officers, writing articles in newspapers was considered to be a risky occupation! Dr Ganguly’s support was total. After publishing a couple of articles, he told me not to show him any draft for formal approval. He always wrote, “Keep it up” on copies of the final articles when Shri Rajagopal, his PA handed them over to him.