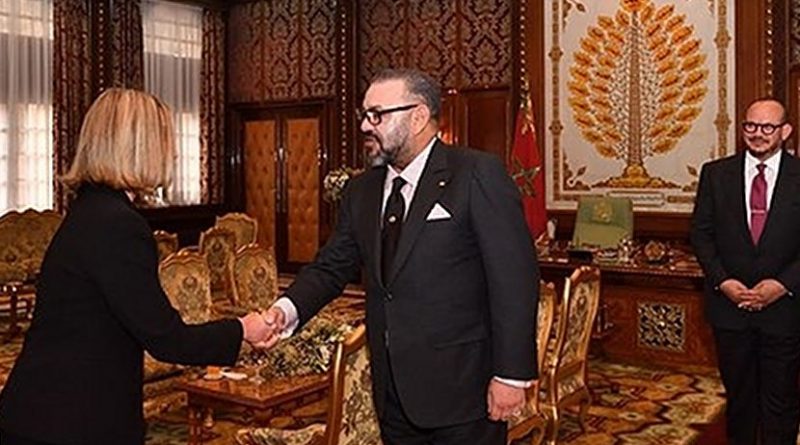 On Thursday, King Mohammed VI received EU High Representative for Foreign Affairs and Security Policy, Vice-president of the European Commission Federica Mogherini, who is on a working visit as part of reinforcing the strategic partnership between the Kingdom of Morocco and the European Union.

The audience granted to Mogherini was an opportunity to highlight the centrality of Morocco in the foreign policy of the European Union, as well as the excellent relations between the two partners which are celebrating their 50th anniversary this year.

During the talks, the Vice-President underlined the Union’s deep attachment to the partnership with Morocco, as well as the pioneering role of the Kingdom in the Mediterranean, in North Africa, in Africa, as well as in the Middle East to address the challenges of security, stability and development.

This audience was an occasion to review the different aspects of the strategic, multidimensional and long-standing partnership between the Kingdom of Morocco and the European Union, in all its political, economic, security, regional and international components and to agree on the need for both partners to face together the multiple challenges of the region in order to seize the existing opportunities.

The recent adoption by the European Parliament of the Morocco-EU Agricultural Agreement underlines that the strengthening of the partnership depends on respecting the Kingdom’s higher interests and preserving its territorial integrity.

The visit EU Foreign Policy Chief Federica Mogherini to Morocco confirms the depth of the strategic partnership binding the North African country to the European Union as the trip comes after the renewal of the Morocco-EU farm deal, including the Sahara.

Speaking  to the Moroccan press EU Foreign Policy Chief  Federica Mogherini stated that Morocco is “strategic partner of the EU for 50 years”, she added that the EU and Morocco are making an important forward step in their relations to build a regional partnership, particularly in the Mediterranean region, the Arab world and Africa.

The EU foreign policy chief also expressed the Union’ readiness to help Morocco speed up socioeconomic development, hailing the importance granted by King Mohammed VI to youth employment and vocational training, two priority areas in the future Morocco-EU cooperation.It is wort noting that on Wednesday and by a large majority, the European Parliament adopted, in Strasbourg the agriculture agreement between Morocco and the European Union dealing a new blow to the Algeria-backed Polisario Front’s attempt to block the deal.

The agreement, adopted by 444 votes in favor, gives a new impetus to relations between Morocco and the EU. It follows recent positive developments that have enabled both sides to strengthen the legal certainty of their trade agreements and consolidate their multifaceted strategic partnership.

This agreement aims to extend trade preferences to agriculture and fishery products from the southern provinces of the Kingdom.

The vote, by an overwhelming majority, is the culmination of a long process of technical negotiations, political consultations and legal validations between Morocco and the EU, the ministry notes, adding that throughout this process Morocco has been driven by a triple logic, namely the non-negotiable defense of its territorial integrity and the fundamentals of its position towards the Moroccan Sahara, the preservation of its economic interests in an important sector with a privileged trading partner and a genuine commitment to a multidimensional and deep partnership with the EU.