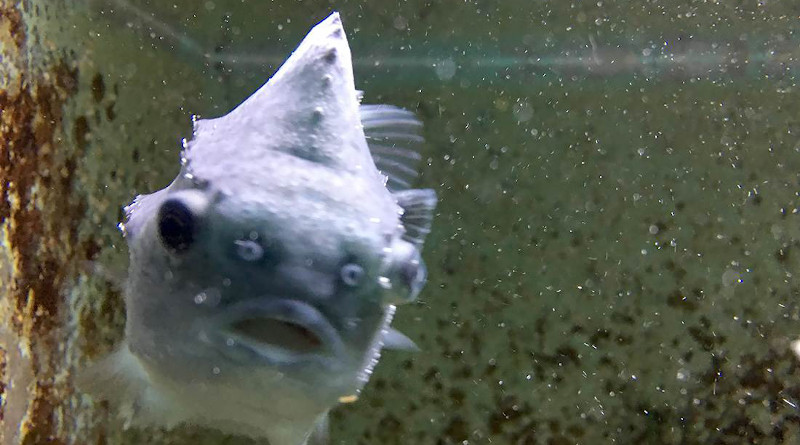 Despite the fact that many fish farmers are doing as well as they can with the current level of understanding, the cleaner fish aren’t doing so well. Photo: Guro Kulset Merakerås

The term “cleaner fish” refers to small fish species that like to eat salmon lice as snacks.

Letting cleaner fish cohabit with salmon seems like a good idea at first glance. Salmon lice are a well-known problem, both for wild salmon and farmed salmon, and chemical delousing methods are harmful to nature. Keeping salmon lice under control has become a significant yardstick to measure Norwegian salmon farming success by.

So it is no wonder that the use of cleaner fish has picked up, and even led to the separate side industry of farm raising cleaner fish.

Gradually awareness is growing that this is not a solution without its dark sides, either. Many of the cleaner fish species have trouble adapting to life in the sea cages, and are not doing well.

Sacrificing one species for another species’ welfare

Now numerous actors are crying foul and asking if we’re so focused on the fight against salmon lice that cleaner fish have ended up being a blind spot. Is it okay to sacrifice the welfare of one type of fish to improve conditions for another?

“We’ve received alarming responses from the fish farmers,” says researcher Kristine Vedal Størkersen, fromNTNU Social Research. The group, affiliated with the Norwegian University of Science and Technology (NTNU)has conducted surveys on behalf of the Norwegian Food Safety Authority in aquaculture farms for food production and in fish hatcheries that raise cleaner fish for use in food production aquaculture.

“Without cleaner fish, we’ll need to come up with a more mechanical method to delouse the salmon, which will result in worse animal welfare, increased mortality, the risk of disease outbreaks and damage to facilities that lead to escape,” she adds.

“The fish farmers tell us that they want a ban on the use of certain species, and they are also very critical of transporting wild-caught cleaner fish.”

“But we have to lay all the cards on the table. Is it right or wrong to sacrifice 50-60 million cleaner fish in order to give salmon a better life?” asks Edgar Brun, department head at the Norwegian Veterinary Institute, in a recent article in the Norwegian newspaper Dagens Næringsliv.

Størkersen thinks we need to know more about how the cleaner fish are doing in order to answer this question.

The researchers conclude that today’s practice runs a significant risk of being ethically unjustifiable. Raising fish that get used up and sacrificed for food production, without becoming food themselves, is an ethical grey zone.

The surveys done by NTNU Social Research reveal that fish farmers question whether cleaner fish are an effective delousing method that actually results in fewer delousing operations. The Norwegian Institute of Marine Research is also concerned about the method’s lack of documented effectiveness.

“The increasing use of cleaner fish, and the major challenges these species face in thriving and surviving in the cages, raises the question of whether this is an acceptable use of animals. When the use of cleaner fish is defended because of their value in sea cages, then at the very least their effectiveness and function in the cages has to be substantiated with robust evidence. Our studies show that such evidence doesn’t yet exist,” says Tore S. Kristiansen, head of research at the Institute of Marine Research. He emphasizes that these knowledge gaps must be closed.

“The fish farmers tell us that they want a ban on the use of certain species, and they’re also very critical of transporting wild-caught cleaner fish,” says Størkersen. She feels that the industry is engaged in the cleaner fish’s well-being, and emphasizes that many fish farms make a great effort to provide good living conditions for the cleaner fish in the cages. For example, cleaner fish have their own hiding spots in the cages to meet their need for shelter and rest.

But despite the fact that many fish farming operations do as well as they can based on the current level of understanding, the cleaner fish isn’t doing so well.

The surveys carried out by NTNU Social Research, the Institute of Marine Research and the Veterinary Institute show that aquaculture players don’t have a good enough overview of how many cleaner fish die.

“On average, fish farmers document that 40 per cent of the cleaner fish they release in the farms die. This amounted to more than 24 million cleaner fish in 2018. If a lot of the cleaner fish disappear without being recorded, the real figure is probably much higher,” says Elisabeth Wilmann, director of fish and seafood at the Norwegian Food Safety Authority.

“Our surveys are showing that industry itself wants a strong and rigorous food safety authority. We need to learn more to know where to draw the line for what is and isn’t ethically justifiable with regard to cleaner fish. And we need more insight into what measures we can take to improve their lives in the sea cages,” says Størkersen.

“Only when we know what conditions the cleaner fish require and whether it’s possible to provide them with the necessary environment, will the Norwegian Food Safety Authority have a basis for saying yes or no to cleaner fish.”

Størkersen is launching a series of regional cleaner fish forums as a practical measure to discuss best practices and identify relevant research areas. There seems to be broad agreement that something needs to be done.

“This can’t continue. The industry has a big job to do and needs to document significant improvement if they want to continue to use cleaner fish in the future,” says Wilmann of the Food Safety Authority.

Home » Cleaner Fish Being Sacrificed In Fight Against Salmon Lice