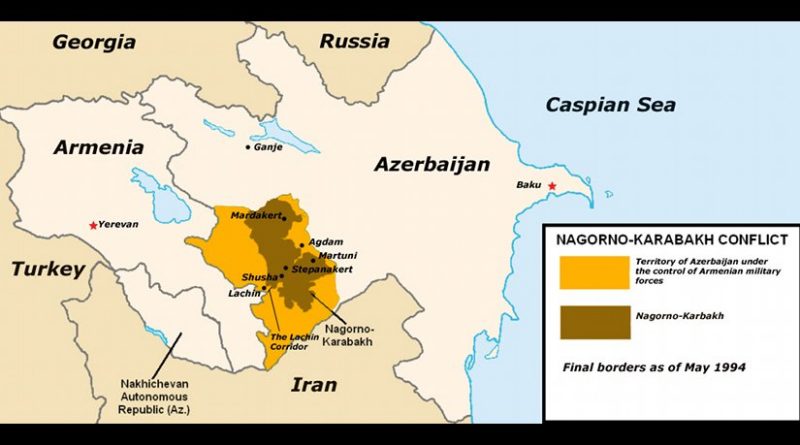 When looking on the existing conflicts one should never underestimate the importance of the historical background of the particular conflict. Thus, by having a quick glance at the Armenian and Azerbaijani history it would be easier to have some insights over one of the most complex disputes of the post-Soviet region.

For Armenia keeping Nagorno-Karabakh is very sensitive issue. If looking back into the history of Armenian nation one would see that this nation has lost so many territories over the decades, particularly the most painful lost was the territory of Western Armenia, which also resulted in Armenian Genocide (1.5 millions of Armenians were killed by Ottoman Turks). Thus, for the Christian nation, which constantly considered itself as a victim of historical injustice and unfortunate destiny the military victory in 1994 was a turning point.

Thus, although the land of Nagorno-Karbakh is not full of natural resources such as gas or oil, and there is no sea access, which would also be essential for the country like Armenia, but it means much more than merely a land with beautiful landscape and pleasing views for Armenian nation. It engenders hope for the whole nation, which changes the psychology of being a victim to the being a victorious nation.

At that time, Soviet Union had far-reaching plans concerning Turkey, which had no actual border with its “brother-nation” Azerbaijan. Therefore, already in 1920 the Soviet Union agreed to a division under which Nagorno-Karabakh and Nakhchivan would fall under the control of Azerbaijan. Needless to mention how frustrated and disappointed were Armenians by losing this diplomatic battle. But for Azerbaijan, having Nakhchivan, which linked them to Turkey was of outmost importance. Therefore, during the whole existence of the Soviet era Azerbaijan with the significant assistance of Turkey was gradually enhancing its stance in Nakhchivan, which resulted in a dramatic decrease of the number of Armenians in that area.

After the collapse of the Soviet Union, in the early 1990s, as a result of anti-Armenian pogroms hundreds of thousands of Armenians fled Azerbaijan and when there was a real fear of the new genocide Armenians of Nagorno-Karabakh expressed their willingness to be reunited with Armenia and to get out of the Azerbaijani control.

This situation resulted in escalation of full-scale military operations and although Armenians succeeded to win that war in 1994, on the diplomatic grounds Armenia’s capabilities were limited. With the engagement of the third parties the negotiation process became even more complicated keeping the region in the tense situation.

Thus, nowadays under the low-intensity war condition, and under the continuous external pressure by Azerbaijan on the international platforms the Nagorno-Karabakh Republic actively undertakes state-building activities. And although it has not been recognized by the UN member states yet, it has been recognized by seven US (California, Massachusetts, Rhode Island, Louisiana, Maine, Hawaii, Georgia) and one Australian state (New South Wales). The recognition of the Nagorno-Karabakh Republic by the sub-state entities of the federal states is new phenomenon for the international community. Although these recognition is providing wide scope of cooperation with Nagorno-Karabakh Republic, and in some cases that cooperation does exist (twin-cities, bilateral visits, investments in Nagorno-Karabakh), its implications need to be contextualized yet.

Home » Why Is Nagorno-Karabakh Vital For Armenia? – OpEd

Edita Ghazaryan has comprehensive background in research on international affairs and political science, reinforced by an extensive academic training and a multifaceted skill set, including program monitoring and evaluation, editing, and trilingual fluency (Armenian/English/Russian). Proficiency in conducting policy and market research. Currently works at Breavis Research and Communications Company as Data Collection Officer. Has a number of published articles in international journals.

9 thoughts on “Why Is Nagorno-Karabakh Vital For Armenia? – OpEd”