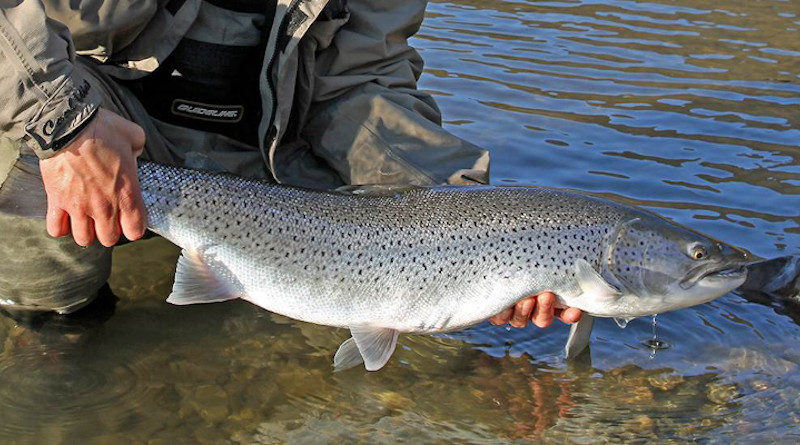 Researchers in Norway will be checking large numbers of trout to figure out what factors are the greatest disrupters of the wild fish. With this information, researchers might be able take action to help increase the sea trout population again. Photo: Sindre Håvardstein Eldøy / NTNU

Sea trout get no peace. They’re constantly exposed to new diseases and ailments, many of which are due to climate change and human activity.

Now researchers want to find out which diseases are affecting the fish in order to know how to help them. The researchers plan to explore the entire coast of Norway, but have started on a smaller scale.

“We’ve investigated viruses, bacteria and parasites on 160 sea trout in the Skjerstadfjord and the Tosenfjord in Nordland county,” says associate professor Jan Grimsrud Davidsen in the Department of Natural History at the Norwegian University of Science and Technology’s (NTNU) University Museum.

The research group has looked at what diseases the fish have and how they affect fish behaviour.

Don’t know what is afflicting them

The research group searched for 46 different disease-causing factors, so-called pathogens, and found 11 of them.

“The most important thing was that we found out the method works. But we didn’t really find much disease on the fish in either the Skjerstadfjord or the Tosenfjord,” says Davidsen.

The researchers had to use an analysis method developed for fish in the Pacific Ocean – because that was the only existing option. It wasn’t an ideal solution.

“We think the analysis results weren’t completely accurate, because we didn’t screen for the correct pathogens. The problem is that we don’t quite know what diseases we’re looking for. Currently we still know very little about which pathogens affect sea trout on the Norwegian coast. But we hope to learn more about that in the follow-up project to map the entire coast,” Davidsen says.

The studies of the two rivers in Nordland were a pilot project. The researchers have now received 1.1 million Euros from the Research Council of Norway to continue and expand the project, starting this summer.

In the next few years, the research institute NORCE, the Institute of Marine Research, NINA, fisheries authorities in Canada and the NTNU University Museum will map the spread of sea trout diseases and parasites along the entire Norwegian coast.

“So far, we’ve looked at data that we had already collected. Now we’ll be collecting the first new data from the Beiarfjord in Nordland and a fjord in Western Norway,” says Davidsen.

The researchers plan to tag 150 fish with traceable electronic tags.

“Then we’ll be able to examine both the activity level and the migration pattern of the fish, to see how diseases affect their behaviour and energy consumption,” he says.

In practical terms, the researchers take a cell sample from the gills of the sea trout, which are fitted with electronic ID tags. The gill sample is only the size of a pinhead, but yields a lot of information that is quite fascinating.

“Using a completely new DNA method, we can screen this sample for traces of 90 different viruses, parasites and bacteria,” says Davidsen.

These analysis methods are the most advanced available and will enable the researchers to detect whether the sea trout is just a carrier of the disease or is actually sick.

“We can link this information to sea trout behaviour. We register their behaviour using the electronic ID tags and listening stations that we set up in the fjords. Then we can see if sea trout with various diseases or parasites behave differently from other sea trout.

Important for the fish

So why is this research important?

“Sea trout in Norway and the rest of Europe are in decline. The main reason lies in the ocean. We know very little about the effect of pathogens, and it’s important to find out the role they play,” says Davidsen.

The aquaculture industry in Norway is growing. We know that this also contributes to an increase of pathogens in wild fish, and so it is important to find out what effect they have on sea trout. Researchers have already ascertained that salmon lice have an effect on wild fish. Now it is high time to look at other diseases and parasites as well.

“If we figure out what is afflicting the wild fish the most, we may be able to do something about it. Maybe this knowledge will help us build up the sea trout population again,” Davidsen says.