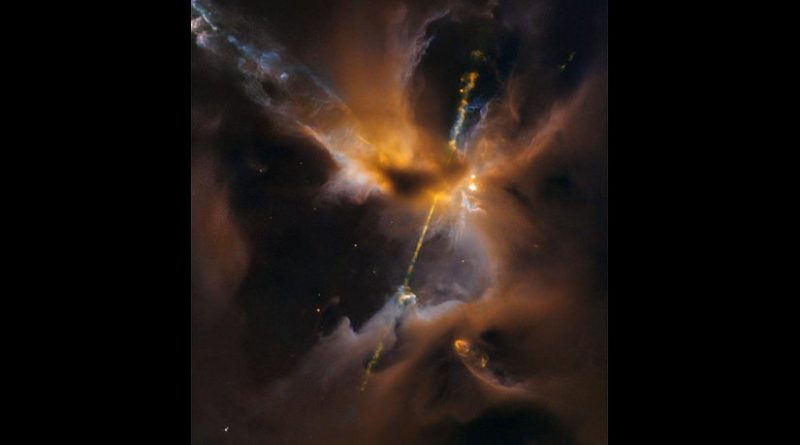 The two lightsaber-like streams crossing the image are jets of energized gas, ejected from the poles of a young star. If the jets collide with the surrounding gas and dust they can clear vast spaces, and create curved shock waves, seen as knotted clumps called Herbig-Haro objects. Credit: ESA/Hubble & NASA, D. Padgett (GSFC), T. Megeath (University of Toledo), and B. Reipurth (University of Hawaii)

Perfectly timed for the release of “Star Wars Episode VII: The Force Awakens”, this NASA/ESA Hubble Space Telescope has imaged a cosmic double-bladed lightsabre. In the centre of the image, partially obscured by a dark Jedi-like cloak of dust, an adolescent star shoots twin jets out into space, demonstrating the fearsome forces of the Universe.

This celestial lightsabre lies not in a galaxy far, far away, but within our home galaxy, the Milky Way. More precisely, it resides within a turbulent patch of space known as the Orion B molecular cloud complex, which is located just over 1350 light-years away in the constellation of Orion (The Hunter).

Bearing a striking resemblance to Darth Maul’s double-bladed lightsabre in Star Wars Episode One, the spectacular twin jets of material slicing across this incredible image are spewing out from a newly formed star that is obscured from view, cloaked by swirling dust and gas.

When stars form within giant, gaseous clouds, some of the surrounding material collapses down to form a rotating, flattened disc encircling the nascent stars, which are known as protostars. This disc is where a potential planetary system might form. However, at this early stage, the star is mostly concerned with feeding its Jabba-like appetite. Gas from the disc rains down onto the protostar and, once nourished, the star awakens and jets of energised gas from its poles whirl out in opposite directions.

The Force is strong with these twin jets; their effect on their environment demonstrates the true power of the Dark Side with a blast stronger than one from a fully armed and operational Death Star battle station. As they stream away from one another at high speeds, supersonic shock fronts develop along the jets and heat the surrounding gas to thousands of degrees.

Furthermore, as the jets collide with the surrounding gas and dust and clear vast spaces, they create curved shock waves. These shockwaves are the hallmarks of Herbig-Haro (HH) objects — tangled, knotted clumps of nebulosity. The prominent Herbig-Haro object shown in this image is HH 24.

Just to the right of the cloaked star, a couple of bright points of light can be seen. These are young stars peeking through and showing off their own faint lightsabres. One hidden, cloaked source, only detectable in the radio part of the spectrum, has blasted a tunnel through the dark cloud in the upper left of the image with a wider outflow resembling “force lightning”.

All these jets make HH 24 the densest concentration of HH jets known in such a small region. Half of the HH jets have been spotted in this region in visible light, and about the same number in the infrared. Hubble’s observations for this image were performed in infrared light, which enabled the telescope to pierce through the gas and dust cocooning the newly-forming stars and capture a clear view of the HH objects that astronomers are looking for.