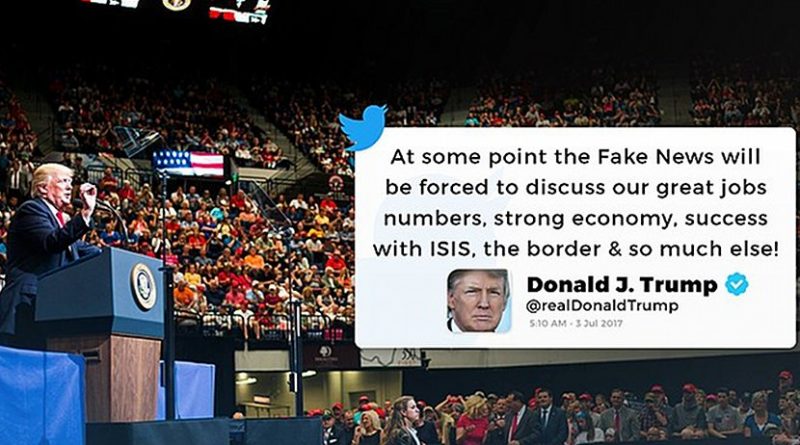 When Donald J. Trump took over as president, there were concerns that the US would become more isolationist given his ‘America First’ approach. Trump’s campaign rhetoric had clearly promised such a shift. One year into his presidency, has the US moved away from multilateralism?

To say that a Trump presidency is unlike that of his predecessor would be an egregious understatement. In fact, being different from his predecessor was exactly what he had prided himself to be, and what presumably appealed to voters who had become discontented with the US political establishment. One way that President Trump has differed from Barack Obama is in his disdain for news media and his preference for using social media to air his views.

Mr Obama is often referred to as the ‘first social-media president’ given the burgeoning use of social media by the public at the time and his administration’s deft use of such platforms as public communication and engagement tools. President Donald Trump has really made social media, specifically Twitter, a key tool in his engagement with the American public and the world.

The Real Donald Trump on @realDonaldTrump

With approximately 46.4 million followers on his @realDonaldTrump Twitter account, Mr Trump has continued to use his personal account, instead of the official @POTUS account (21.7 million followers), to air his views on a variety of issues including domestic policies, the role of the media, terrorism, and foreign policy. Mr Trump’s tweets have been examined and analysed by numerous experts such as data analytics companies, the media, data scientists, and linguists.

Some of their findings demonstrate that not all tweets by @realDonaldTrump are actually tweeted by Mr Trump himself (the use of language, the time of the tweet, and even what kind of device it was tweeted from can help differentiate between Trump’s own musings and his administration’s writings). Congratulatory tweets and tweets about announcements (i.e. ‘official’-sounding tweets) tend to be written by his staff while the more emotionally-charged tweets are his own.

Is It Truly ‘America First’?

How do President Trump’s tweets about policy relate to actual policy? It is unclear if his tweets are an accurate representation of his administration’s stance or if the tweets themselves have an impact on the policy-making process even though the tweets are considered official government statements. For example, the Washington Post did their own analysis on Mr Trump’s tweets and US foreign policy and noted that in 2017, his tweets repeatedly offended close US allies and made it difficult to understand what his administration’s exact position on issues was.

President Trump’s foreign policy stance is encapsulated in the phrase ‘America First’. His foreign policy style assumes a cynical and ominous view that the world is out to ‘cheat’ America (e.g. foreigners stealing jobs, allies free-riding on US commitment and security) and thus he aims to put American needs at the forefront and lessen the burden of global leadership.

This has translated into tweets that are combative in tone (e.g. lashing out at Pakistan over US aid, calling Mexico and Canada ‘difficult’ over NAFTA negotiations) and led to plans to reduce US commitment in multilateral forums. Despite the aforementioned, has actual policy shifted? In Donald Trump’s first year in office, has the US retreated from multilateralism?

The data suggests that despite his tweets and rhetoric, US engagement with multilateral institutions remains consistent. In the case of the United Nations, while the US has sought to reduce its financial commitments to the institution, Washington remains generally actively involved with the global body. In the case of the North Atlantic Treaty Organisation (NATO), the same holds true.

While Mr Trump was highly critical of the security institution, calling it ‘obsolete’ and criticising NATO allies for not meeting their financial commitments to the alliance, the US remains committed and US military presence in Europe has not decreased. Likewise for other institutions such as the European Union, despite what Mr Trump tweets, there has been no change to US policy and/or involvement in these organisations.

It is important to note, however, that despite his proclivity for Twitter, Mr Trump has mentioned multilateral forums infrequently in his tweets as the bulk of his tweets tend to focus on domestic issues or bilateral relations. While the lack of mention of multilateralism may in itself be taken as an indicator of Mr Trump’s shift away from it, his administration’s continued work in the area suggests otherwise.

In all, the concerns surrounding an increasingly isolationist America wanting to shift away from multilateralism should ease. Despite Mr Trump’s rhetoric and tweets, the US remains involved and committed to the various multilateral institutions that it is a member of.

*Amanda Huan is a Senior Analyst with the Centre of Multilateralism Studies at the S. Rajaratnam School of International Studies (RSIS), Nanyang Technological University, Singapore.