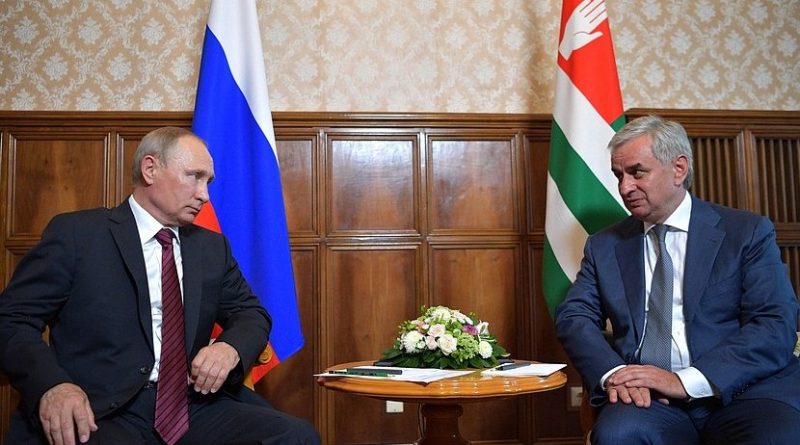 By Maximilian Hess and Maia Otarashvili*

(FPRI) — Abkhazia, one of Georgia’s breakaway regions, faces a major political crisis—its presidential frontrunner was allegedly poisoned for the second time in less than a year. The crisis highlights the challenges resulting from Tbilisi and the West’s static policy on the territory, unchanged over the last 12 years, and their inability to respond dynamically to developments in the region.

Abkhazia will hold a second “presidential election” on March 22 after the results of the August-September 2019 election were thrown out by the region’s de facto highest court in January after regular protests claiming incumbent Raul Khajimba had manipulated the vote. During the 2019 campaign, opposition candidate Aslan Bzhania had to pull out after falling ill, which his supporters blamed on Khajimba. Bzhania was hospitalized for a second time in Russia on March 2. His supporters quickly took to the streets alleging that he had been poisoned.

The latest scandal comes less than two months after Khajimba resigned as president, amid demonstrations by Bzhania’s supporters alleging the 2019 election was fraudulent. The situation may spin out of control, and merits close monitoring by Georgia—the least involved actor in the crisis, yet the biggest stakeholder when it comes to Abkhazia’s future. However, Georgia and its Western allies are paying remarkably little attention to the situation. Neither seems interested in addressing the situation in a manner that could improve Georgian-Russian reconcilaition

In a remarkable turn of events for a region so dependent on Moscow, Abkhazian acting President Valery Bganba summoned the Russian Ambassador on March 4, publicly complaining that Russian state media was fueling speculation about Bzhania’s poisoning. Bganba cited a report in the main state outlet, RIA Novosti, that quotes an unnamed source from the local medical community in Krasnodar, where Bzhania is being treated, affirming that the presidential candidate was indeed poisoned. Russian state media did quickly change its tune, with TASS citing “a source in the hospital (where Bzhania is being treated)” as saying he was suffering from pneumonia.

Russia has long dominated Abkhaz politics, but, this year, its agenda in the region has faced more uncertainty than at any point since the 2008 Russo-Georgian war.

Russia’s agenda in Abkhazia was traditionally managed by Vladimir Putin confidant Vladislav Surkov. But Surkov left the Kremlin earlier this year in still-unexplained cirucmstances. His role as the manager of Moscow’s relations with the Russian-backed breakaway states in eastern Ukraine was handed over to Dmitry Kozak, another longtime player in the Kremlin. However, a new curator for Georgia’s Russian-backed breakaway states, South Ossetia and Abkhazia, has not yet been named.

It was Surkov who brought Khajimba to power in the so-called 2014 “May event,” in which then-President Alexander Ankvab was chased from office. Khajimba, a former KGB man like Putin, resigned in January after Surkov was dispatched to Abkhazia, but that is not to say that all Abkhaz politics are the plaything of Kremlin elites. Khajimba was able to pursue his own policies so long as he maintained Russian integration.

Among the most notable of Khajimba’s policies was his decision to strip ethnic Georgians living in Abkhaz territory of their “Abkhaz citizenship.” That was an attempt to help ensure his reelection, as the ethnic Georgian population that makes up the majority of the Gali district’s population did take part in the region’s 2004 and 2009 elections and vote for Sergey Bagapsh. Bagapsh defeated Khajimba both times.

Acting President Bganba has been firmly in Khajimba’s camp for some time. He also appears to hold Moscow’s trust since this is the second time that he has served as acting president, the first time coming after Ankvab’s 2014 ouster. Bganba’s decision to summon the Russian ambassador, therefore, will naturally prompt speculation that it is another example of the Kremlin employing smoke and mirrors to achieve its desired outcome in Abkhazia. It may also indicate that without Surkov or a successor managing the relationship, Abkhazia’s elites do not know who to turn to. What is clear is that the Kremlin prefers the status quo, likely including keeping Khajimba’s camp in charge.

Bzhania’s candidacy threatens that status quo because it offers a small but important opening to Tbilisi. The seemingly “progressive” candidate even called for new dialogue with Tbilisi, saying he was ready to do so in any format. In a recent interview, Bzhania remarked: “How do you think these issues should be resolved? Should they be discussed in Geneva or simply on the border, with the people who are involved in this process? Is it bad if law enforcers cooperate in terms of combating crime? Should it be done? I think that it is essential.”

For the first time in years, there is a real opportunity for Georgia to gain access to isolated Abkhazia. Bzhania is the first potential leader in Sokhumi who has expressed openness to direct dialogue with Tbilisi for some time. Bzhania represents the voices of those Abkhazia residents who are struggling to survive in the austere conditions of the region. Individuals are unable to receive adequate healthcare without Tbilisi’s involvement, and their lives are made unsafe and uncertain by rampant crime. Bzhania says he is open to discussing these basic issues with Tbilisi, as long as Russia’s long-standing interests in the region are fully taken into consideration.

Although his Telegram page announced that the candidate is feeling better and plans to participate in the election, Bzhania still faces major obstacles on his way to the region’s presidency, as his alleged poisonings demonstrate. However, his supporters’ willingness to take to the streets sends a message not just to the local authorities and their Russian overseers, but also to the outside world. Their message is clear: they are open to a different way of life, one that provides more opportunity and can better guarantee their safety and wellbeing. Unfortunately, their message is falling on deaf ears.

Some Georgian politicians have welcomed Bzhania’s call, but Georgia’s two main parties, the ruling Georgian Dream and the opposition United National Movement, have largely stuck to their traditional positions: insisting only on direct negotiations with Moscow or through talks in the Geneva format, which involves representatives from Abkhazia and South Ossetia as well as Tbilisi and Moscow. The latest iteration of those talks, held in December 2019, ended without any notable progress. There have been 50 such rounds over the last 12 years, with Moscow refusing to discuss the internally displaced Georgians who remain refugees in their own country, as well as insisting on treating Abkhazia and South Ossetia as sovereign.

It is time for a new plan. This is a reality that must be recognized not only by Abkhazia’s residents, but also by Georgia and the West. However, Georgia’s endless domestic political crises have left Tbilisi with very little bandwidth to deal with Abkhazia. Since June 2019, the country has been wrapped up in political unrest over the ruling party’s consolidation of power and refusal to implement crucial electoral reforms. Only on March 8 did the United States finally broker an agreement between the ruling party and the opposition on the rules of the upcoming parliamentary election. The struggle to save Georgia’s faltering democracy is far from over and is likely to keep Tbilisi and the West preoccupied, while the rare opportunity for direct dialogue between Tbilisi and Sokhumi disappears.