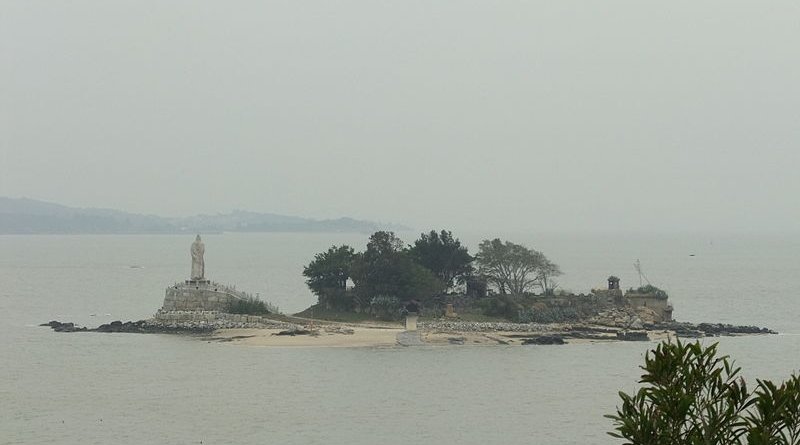 The islands of Kinmen, located near the People’s Republic of China (PRC) but controlled by Taiwan, are often overlooked in analyses on cross-strait affairs. In the midst of rising cross-strait tensions, the island group remains in a unique and strategic yet awkward position.

Also known as Quemoy, Kinmen county is often overlooked in analyses on cross-strait affairs. Controlled by Taiwan, the county consists of the Kinmen Islands (including Great Kinmen and Lesser Kinmen) and the Wuqiu Islands, and has a population of about 135,000 residents. Geographically, the island group is much closer to mainland China than to Taiwan. It is a few kilometres off the eastern coast of the port of Xiamen and just a short 30-minute ferry ride away. In contrast, it takes an hour’s plane ride to reach Taipei, which is more than 300 kilometres away.

From Militarism to Tourism

Historically, Kinmen bears great significance in cross-strait ties. In 1954-55 and in 1958, Kinmen served as the frontline of the First and Second Taiwan Strait Crises, which saw military clashes between the Chinese Communist Party (CCP) and Kuomintang (KMT). It was transformed into a defensive stronghold, extensively fortified by the KMT, and stationed up to 20,000 troops.

The People’s Liberation Army (PLA) shelled the islands heavily in the 1950s, and this continued into the late 1970s. Under martial law, which was lifted in 1992, the residents remained largely isolated, even from the main island of Taiwan.

Today, relics from the crises serve as reminders of the past and as key attractions for tourists. The raw material for Kinmen’s popular high quality kitchen knives and cleavers comes from the more than 400,000 artillery shells that were dropped on the islands during the clashes.

Concrete tunnels built for military drills and as air-raid shelters have also been transformed into tourists sites. On top of their famous sorghum liquor distilleries, which contribute to most of the county’s tax revenue, Kinmen also relies on revenue provided by Chinese tourism.

Kinmen and the “Three New Links”

Kinmen has also been playing a role in facilitating cross-strait peace development. In January 2001, the experimental “mini three links” between Xiamen and Kinmen was implemented. The links consisted of the limited opening of trade, transportation, and postal services.

The links aimed to enhance the quality of life for residents on the islands, and to improve cross-strait relations through constructive exchanges. In 2008, the “mini three links” initiative was expanded as part of then-President Ma Ying-Jeou’s campaign promise to relax cross-strait restrictions.

For Kinmen residents, Chinese interactions have become part of their everyday lives. At present, there are 44 ferries that connect Xiamen and Kinmen daily. Each year, close to two million people move to and fro across the waters. Kinmen has actively sought to woo Chinese tourists through the opening of a huge duty free mall in 2014, and activities such as the yearly Quemoy International Music Festival.

In August 2018, Kinmen began importing water from China’s Fujian province in a bid to stabilise their water supply. Then-Kinmen County Magistrate Chen Fu-hai referred to this “water link” as one of “three new links” that he hoped would foster ties between both areas. The other two links were the “electricity link” and “bridge link”.

While the ‘links’ bring much-needed infrastructure development to the county, China’s investment in Kinmen’s development is perceived not only as an economic issue, but a political one as well. From Taipei’s perspective, China is using the water system to gain political support.

Not surprisingly, Beijing has criticised the Democratic Progressive Party (DDP) government for not supporting the water system on political grounds and for neglecting Kinmen residents. Taiwan’s Mainland Affairs Council requested for Kinmen to delay the opening ceremony of the new water system but this was mostly ignored and an opening session was held on 5 August 2018.

Entanglement of Identity and Politics

In terms of identity, it is unclear how the Kinmen people perceive themselves. Public opinion polls done by National Chengchi University, as reported by the LA Times, show that the younger generation living on the main island of Taiwan generally identify as Taiwanese and not Chinese. They bear little cultural attachment to China, while the older generation may still think of their ancestral hometowns.

This trend may also hold true in Kinmen. A 2006 cultural study done on Kinmen residents found that the Kinmen identity is multifaceted, has its own development narrative and is arguably not yet fully-formed.

Politically, as reflected in past elections, the Kinmen county has generally been pro-KMT. Residents have expressed unhappiness that the smaller islands were not included in the DDP’s party flag, as well as towards President Tsai’s absence from the 60th anniversary of the 823 Artillery Bombardment, which commemorated the military incident that sparked off the 2nd Strait Crisis.

In Kinmen, identity and politics are entangled. Kinmen residents see themselves as being culturally Chinese (Fujianese), but with no political attachment to PRC, yet there is dissatisfaction with mainland Taiwan over how Kinmen has been governed and the DPP’s seeming indifference.

The present state of cross-strait relations paints a dire picture for Kinmen residents. A recent collision between a Chinese warship and a Taiwanese freighter 20 nautical miles south-east of Kinmen is a stark reminder of the island’s fragile geostrategic position should conflict ever break out between the two sides.

The next Taiwan presidential election is set to be held in January 2020. As with past elections, relations with China remains a major and hotly-contested campaign issue. The situation in Hong Kong has also refocused attention on the future of Taiwan.

Given Kinmen’s unique position, relations with China will remain important for most Kinmen residents but at the same time, they cannot ignore the reality of geopolitics. No matter the election result next year, Kinmen and its residents will constantly have to do a balancing act.

*Amanda Huan is a PhD candidate and Tan Ming Hui is Associate Research Fellow in the Office of the Executive Deputy Chairman at the S. Rajaratnam School of International Studies (RSIS), Nanyang Technological University (NTU), Singapore.

Home » Kinmen At The Crossroads: A Balancing Act? – Analysis