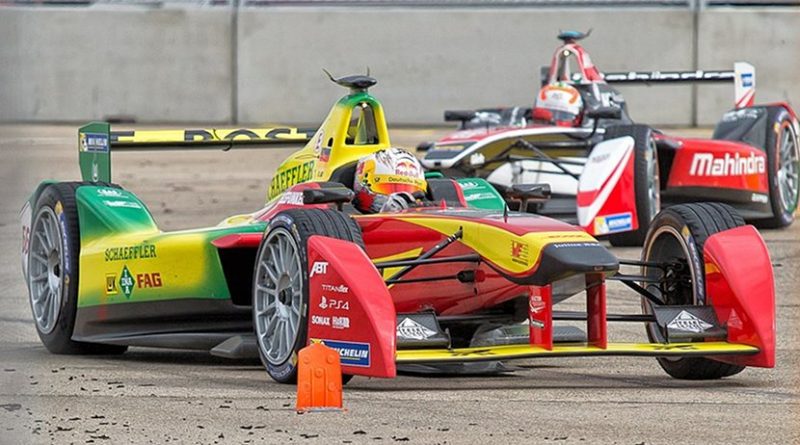 Daniel Abt during the formula E race in Berlin Tempelhof, 2015. Photo by Avda, Wikimedia Commons.

(EurActiv) — The London-based Formula-E electric car racing series will leave Britain if Brexit goes ahead without a deal on tax and employment, the outfit’s chief executive said on Wednesday (15 November).

The global city-based championship, which will be starting its fourth season in Hong Kong on 2 December, employs about 100 staff at its West London headquarters.

Alejandro Agag, who has lived in London for 15 years, said he was “very worried” by Brexit and Formula-E could relocate its business to the European Union in the space of a day if necessary.

“We have a lot of expats that work in the company… probably of our 100 employees, 50 are British and 50 are from other countries,” he told Reuters at a media breakfast with members of the Jaguar team.

“And a lot of our contracts come from the European Union in terms of sponsorship, so if there is not a deal in terms of tax and employment, we will leave.

“We probably would leave overnight. We could make a decision in one day and then leave. We’re looking at different options. Maybe Holland, maybe Monaco. Some nearby place in the European Union,” he added.

Agag said his strong preference would be to stay – not least because he had just bought a new house.

But withholding tax being imposed on sponsorship payments from EU-based partners once Britain leaves the EU in 2019 would force his hand.

“If there are withholding taxes on sponsorship payments that would make our business impossible. So then we would have to leave. And of course, if the people cannot stay here working then that would make us leave also,” he said.

“A sponsor from France, like Michelin for example, the fee they pay me will have a 30 percent withholding. So my revenue will go down by 30 percent.

“And if I move to France or Holland, I will get the whole fee. It’s a no-brainer.”

Most of the teams are based in Britain but the country has been off the Formula-E calendar since 2016 after residents near Battersea Park complained of the disruption on their doorstep.

Agag said the immediate prospect of London hosting another race was slim, with a proposed ePrix down the central Mall and around Buckingham Palace rejected by Royal Parks.

But talks are continuing with other boroughs.

“In other places in the world we are really welcome. We race in the centre of Paris, we race in Rome, we race in Hong Kong. And we don’t even have one complaint from residents.”

Formula-E will have 14 races in 11 host cities in the 2017-18 season with four new venues in Rome, Zurich, Sao Paulo and the Chilean capital Santiago.

The ePrix in Switzerland will be the country’s first motor race since 1955. The country lifted restrictions on circuit racing in 2015 for fully-electric vehicles.

The series is part-owned by Liberty Global and has attracted strong manufacturer interest, with Porsche and Mercedes set to enter from Year Six. Nissan will replace alliance partners Renault in 2018.

Other manufacturers involved are BMW, Audi, Jaguar, Citroen and India’s Mahindra. The increased interest of the automotive sector’s major players has gone hand-in-hand with pledges to ditch the traditional combustion engine and the EU’s recent proposal on decarbonising transport.