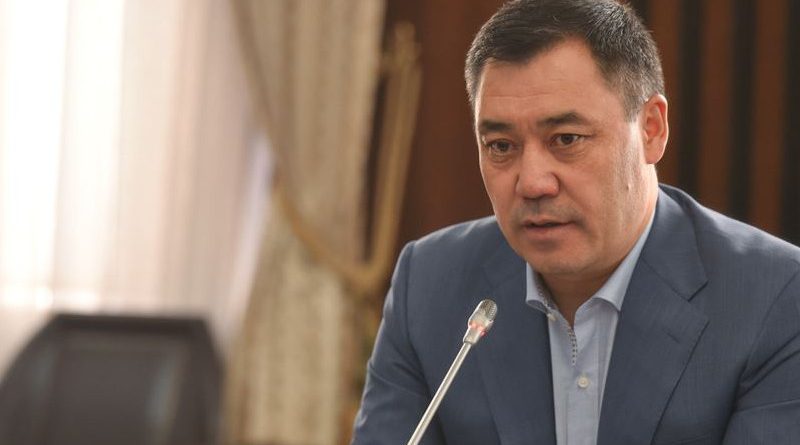 (RFE/RL) — Kyrgyz lawmakers have initiated constitutional changes that critics say would concentrate too much power in the hands of the president ahead of a presidential election scheduled for January.

The move comes amid a political crisis triggered by mass protests over the results of parliamentary elections last month that led to the resignation of the government and President Sooronbai Jeenbekov.

The constitutional draft, made public on November 17, was initiated by Sadyr Japarov, who has been accused by a number of politicians and civil rights activists of trying to “usurp” power since becoming acting president.

The draft, which a post on the parliamentary website said was supported by 80 lawmakers, proposes widening presidential powers and creating a new body in the executive called the People’s Kurultai (Congress), to which parliament and the government would report.

The number of lawmakers in the parliament would be reduced from 120 to 90 and the government would be supervised directly by the president and his administration.

Presidential spokesman Nurgazy Anarkulov insisted that the published text is not the final draft, and defended the proposed changes by saying that Kyrgyzstan needs a “leader.”

“The constitution’s final variant will be based on all opinions and proposals. Time has shown that for the nation’s social and economic development, one person — or the nation’s leader — is needed. In the past nobody was responsible for all the developments in the country and that led to lawlessness. People who are tired of such a situation demand changes,” he said in a statement.

“Parliament [and] the prime minister are supposed to lose all powers, while presidential powers will be widened significantly,” Kulov said, adding that the proposed People’s Congress reminds him of a Turkmen rubber-stamp body called the People’s Council (Halk Maslahaty).

Former lawmaker Sadyk Sher-Niyaz told RFE/RL that parliament members “most likely did not realize what they signed.”

“I realize that many lawmakers have not even seen the text of the draft constitution that would take us back 20-30 years. My question is: Why our parliament, elected by the people, must be controlled by the People’s Congress? To impose a supervising organ over lawmakers, in my opinion, is a way of establishing a totalitarian regime, a dictatorship,” Sher-Niyaz said.

Legal expert Sania Toktogazieva also harshly criticized the proposed constitutional changes, saying they would establish a “super-presidential system” of government in the country.

Emil Toktoshev, one of the lawmakers cited as co-authors of the draft’s published text, told RFE/RL he does not support the draft.

“It is not clear who worked on the draft. I thought we would discuss it first but that never happened, and I was wrongfully cited as an author of the text that was quickly made public without taking into account lawmakers’ opinions,” Toktoshev said.

The Russia and Kyrgyz versions of the constitutional draft also include different wording on presidential term limits.

Under the current constitution, one person cannot serve more than one presidential term.

During last month’s postelection protests, which prompted authorities to cancel the results of the parliamentary elections, Japarov was released from prison where he was serving a sentence for kidnapping a political rival.

As acting president, he signed legal changes that postponed fresh parliamentary elections tentatively set for December 20 to an unspecified date in 2021, despite a requirement that such a vote come within two months.

That move cleared the way for early presidential elections on January 10.

Under current legislation, anyone serving as president in an interim capacity may not then run in an election for the post.

Japarov has said several times he planned to step down in December to be eligible to seek the presidency.