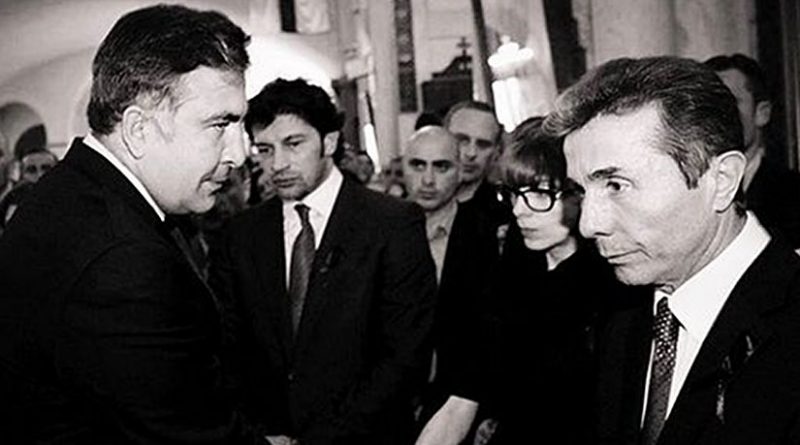 (RFE/RL) — Ukrainian opposition leader Mikheil Saakashvili appeared at the Prosecutor-General’s Office in Kyiv on December 18 but refused to answer questions from investigators.

Ukrainian authorities have accused the former Georgian president and ex-Ukrainian governor of abetting an alleged “criminal group” led by former President Viktor Yanukovych, who fled to Russia after his ouster in February 2014. They also have suggested that protests led by Saakashvili are part of a Russian plot against Ukraine.

Saakashvili has strongly denied all the charges.

Outside the Prosecutor-General’s Office in the Ukrainian capital, Saakashvili told reporters he would give testimony only when the case is handed over to the Ukrainian Security Service, “as required by law,” Interfax reported.

A spokesperson for the prosecutor-general said Saakashvili had “disrupted the investigative procedure” by failing to be questioned by the investigator who summoned him, according to Interfax.

Meanwhile, Western diplomats have expressed concern after Saakashvili supporters briefly attempted to seize a public building in Kyiv during a rally to demand the impeachment of Ukrainian President Petro Poroshenko.

Saakashvili’s followers marched through Kyiv on December 17 and then rallied with him on Independence Square to call for Poroshenko to be officially removed from office.

During the rally, Saakashvili suggested setting up a headquarters for the protest in the October Palace, a performing arts and conference center overlooking the square.

People in the crowd shattered windows and tried to break the doors down to the building but were prevented by police from getting inside.

At the time, hundreds of children were reported to be attending an event in the October Palace.

The attempt to seize the building drew rebukes from some Western diplomats.

On Twitter, Canadian Ambassador Roman Waschuk said that “attempts to seize and damage public buildings are an abuse of the right to peaceful protest.”

The U.S. Embassy in Kyiv joined in later on Twitter.

“We agree with our colleagues from Canada and the U.K. Attempts to capture and destroy public buildings are an abuse of the right to peaceful protest,” it wrote.

After the protesters’ attempts to enter the building failed, Saakashvili said he wanted to “rent two rooms there” and that the clashes were “President Poroshenko’s game and provocation.”

“I denounce any [attempts] to break windows, because once there are millions of us, these doors and these windows will open themselves. We don’t need to break them, people,” Saakashvili added in an interview with RFE/RL’s Ukrainian Service.

Kyiv police said at least 32 security officers were injured in confrontations with protesters near Independence Square — the site of the monthslong 2013-14 protests that led to the ousting of Yanukovych.

With police looking on, the demonstrators on December 17 marched through central Kyiv toward Independence Square.

They urged parliament to adopt legislation on a presidential impeachment and called on Prosecutor-General Yuriy Lutsenko to step down.

Ukrainian police on December 5 tried to detain Saakashvili but supporters crowded around a police vehicle in which he was being held and then freed him.

He was again detained three days later, but a judge on December 11 turned down a request by prosecutors to place him under house arrest.

Lutsenko has said he would appeal the judge’s ruling and that Saakashvili will likely be extradited to Georgia, where he is wanted on charges linked to when he was that country’s president.

“We have an official request from the country, which we do not have the right to refuse,” Lutsenko told reporters on December 15.

Saakashvili was president of Georgia from 2004-13. He lost his Georgian citizenship in 2015 when he accepted Ukrainian citizenship and took the post of Odesa governor.

Saakashvili resigned the position in November 2016, complaining of rampant corruption, and has since becoming an ardent opponent of Poroshenko.

In an interview with Current Time TV, the Russian-language network run by RFE/RL in cooperation with VOA, Saakashvili said on December 12 that corruption inflicted far greater damage on Ukraine than Russia had.

He added that he has no ambition to become Ukraine’s president, saying the position should always be held by an ethnic Ukrainian.

The authorities “really think that it’s enough to shout ‘Russia’ and ‘agents of the enemy’ and everyone will just buy that. People are not stupid. They didn’t buy it earlier, they’re not buying it now,” Saakashvili said.

After Yanukovych was ousted, Russia illegally annexed Ukraine’s Crimea region in March 2014 and fomented a separatist insurgency in eastern Ukraine that has killed more than 10,300 people since April 2014.

Home » Saakashvili Refuses To Be Questioned By Ukraine’s Prosecutor-General