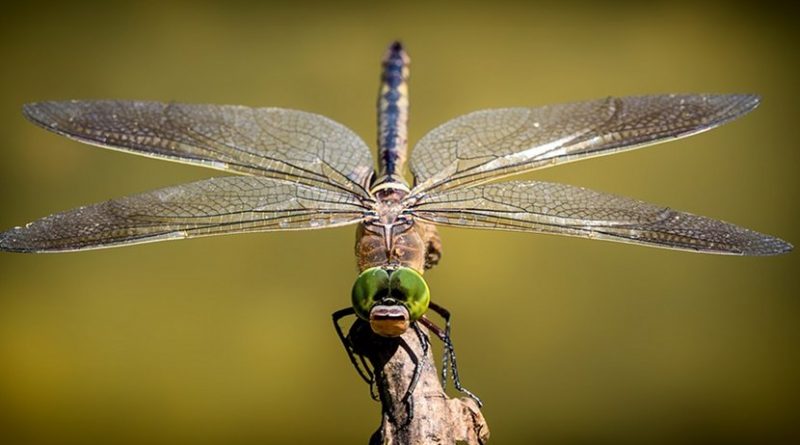 Thanks to photos and films featuring clouds of stunning orange and black monarch butterflies flying across North America, many people today are familiar with how monarchs migrate. The migration patterns of other insects, however, remain more mysterious, for both the public and scientists alike. A new paper in Biology Letters describes a dragonfly’s full life cycle for the first time, in compelling detail.

The researchers explain how the common green darner–a large, abundant dragonfly found across North America–takes three generations to complete its annual cycle. One generation migrates north in spring, the second south in fall, and the third is resident in the southern part of the species’ range over winter. These insects have a wingspan of just 7.5 cm (3 inches), but they migrate an average of over 600 km (373 miles), with some individuals covering more than 2,500 km (1,553 miles).

“We know that a lot of insects migrate, but we have full life history and full migration data for only a couple. This is the first dragonfly in the Western Hemisphere for which we know this,” says Colin Studds, assistant professor of geography and environmental systems at University of Maryland, Baltimore County (UMBC) and senior author on the paper. “We’ve solved the first piece of a big mystery.”

The common green darner is indeed very common, and not currently a threatened species. Understanding their life cycle is important, though, because of the global context. “There are massive insect declines going on around the world,” says Peter Marra, director of the Smithsonian Migratory Bird Center and second author on the paper, “so understanding these complex biological patterns is essential to determine why different populations might be declining.”

Insects are a critical driver of food webs, so figuring out why their populations are falling dramatically is important for the future success of a wide range of species, from rodents to raptors.

The research team used a combination of data sets, including 21 years of citizen science data, more than 800 dragonfly wing specimens from museums going back 140 years, and specimens caught in the wild. Collaborators Kent McFarland and Sara Zahendra of the Vermont Center for Ecostudies spent nearly two years collecting dragonflies from Florida to Ontario, Canada, and working with museums to get permission to analyze their specimens.

The team’s creative analysis included looking at the prevalence of different forms of hydrogen in the dragonflies. The ratio of three forms of hydrogen in the atmosphere shifts with latitude. Dragonflies pick up an imprint of the hydrogen ratio at their birthplace, so a scientist can determine where a dragonfly came from by looking at how much of each hydrogen type is present in a tiny piece of the dragonfly’s wing. That information enabled the team to discern the three-generation migration system.

The citizen science data–information collected by members of the general public–helped the scientists learn what factors cue the dragonflies to migrate or to emerge as flying adults after their aquatic juvenile stage. It turns out temperature plays a big role: the dragonflies both emerge and initiate migration at around 9 degrees Celsius (48 degrees Fahrenheit).

“With climate change we could see dragonflies migrating north earlier and staying later in the fall, which could alter their entire biology and life history,” says Michael Hallworth, postdoctoral fellow at the Smithsonian Migratory Bird Center and first author on the paper. Studds adds, “Climate change is a threat to all kinds of migration systems, and this could be one of them.”

Studds emphasizes that this discovery is the beginning of a long path toward better understanding insect migrations. Revealing the three-generation process, with two migratory generations and one resident, was, itself, “remarkable,” he says. “How it actually happens is a tremendous new mystery that brings together ecology and evolution,” Studds reflects, “and there’s a lot more to understand.”