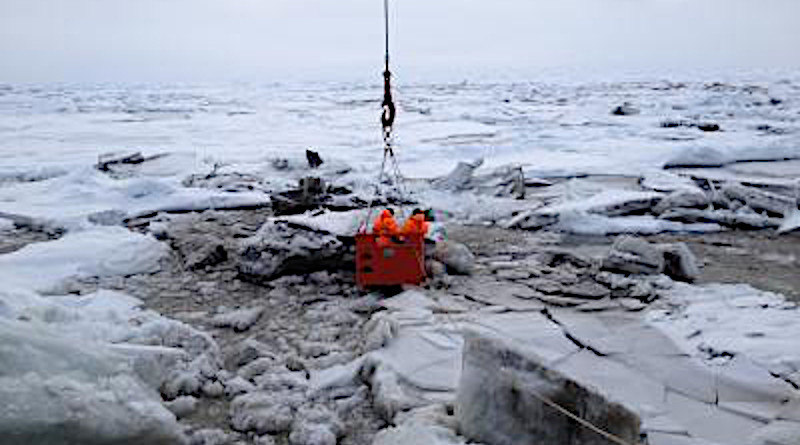 This image shows sediment-rich sea ice in the Transpolar Drift Stream. A crane lowers two researchers from the decks of the icebreaker RV Polarstern to the surface of the ice to collect samples. CREDIT: Photo Credit: R. Stein, Alfred Wegener Institute

The movement of sea ice between Arctic countries is expected to significantly increase this century, raising the risk of more widely transporting pollutants like microplastics and oil between neighbouring coastal states, according to new research from McGill University in collaboration with University of Colorado Boulder, Columbia University, and Arizona State University.

The study in the American Geophysical Union journal Earth’s Future predicts that by mid-century, the average time it takes for sea ice to travel from one region to another will decrease by more than half, and the amount of sea ice exchanged between Arctic countries such as Russia, Norway, Canada, and the United States will more than triple.

Increased interest in off-shore Arctic development, as well as shipping through the Central Arctic Ocean, may increase the amount of pollutants present in Arctic waters. And contaminants in ice can travel much faster than those in open water moved by ocean currents.

“This means there is an increased potential for sea ice to quickly transport all kinds of materials with it, from algae to oil,” says researcher Patricia DeRepentigny from University of Boulder Colorado. “That’s important to consider when putting together international laws to regulate what happens in the Arctic.”

Historically, floating masses of Arctic sea ice could survive for up to 10 years: building up layers, lasting through each summer and mostly melting locally with a small fraction being transported to other regions. As the climate warms, however, that pattern has been changing.

While overall, the sea ice cover is thinning – and melting entirely across vast regions in the summer – the area of new ice formed during winter is actually increasing, particularly along the Russian coastline and soon in the Central Arctic Ocean. This thinner ice can move faster in the increasingly open waters of the Arctic, delivering the particles and pollutants it carries to waters of neighbouring states.

“In a warmer climate, the faster moving ice can travel longer distances and melt in Arctic peripheral seas belonging to other neighbouring states or even survive the following summer and be carried in regions across the Arctic Ocean where it melts”, says Bruno Tremblay, Associate Professor in the Department of Atmospheric and Oceanic Sciences at McGill University.

In a previous study, the authors examined the movement of Arctic sea ice from the instrumental surface temperature record starting in 1979, when the first continuous satellite observations began. That study was the first to document an increase in the amount of sea ice being transported from one region to another over the last four decades. This work has been undertaken by former graduate student of Tremblay, Patricia De Repentigny, lead author of this study.

“The trend was particularly clear looking at the pre-2000 and post-2000 observational records when a clear acceleration of the sea ice decline was apparent,” said Tremblay. “The natural extension of this work, given that global climate models reproduce this observed trend, is to look at the future of ice exchange between neighbouring states of the Arctic.” For instance, Svalbard (an archipelago part of the kingdom of Norway) will see an increasingly large amount of sea ice formed along the Russian coastline and melting in its coastal waters.

The researchers used a global climate model, together with the Sea Ice Tracking Utility (SITU), which was developed by the team, to track sea ice from where it forms to where it ultimately melts during the 21st century.

The researchers considered two different emissions scenarios: the more extreme “business as usual” scenario, which predicts warming of 4 to 5 degrees Celsius by 2100, and a warming scenario limited to 2 degrees Celsius, inspired by the Paris Agreement. They then modeled how the sea ice will behave in both these scenarios at the middle and the end of the century.

In three of these four situations – including both mid-century predictions – the movement of sea ice between Arctic countries increased.

But in the high emissions scenario at the end of the century, they found countries could end up dealing more with their own ice and its contaminants, than ice from their neighbours. This is because with 4 degrees or more of warming in 2100, most sea ice that freezes during winter will melt each spring in the same region where it was formed.

Russia and the Central Arctic

Russia’s exclusive economic zone and the Central Arctic Ocean are two places the researchers expect more ice to form, becoming major “exporters” of ice to other regions in the Arctic.

An exclusive economic zone (EEZ) is an area extending 200 nautical miles from the coastline, over which a state has special rights regarding fishing, shipping, and industrial activities like offshore oil drilling. Five countries have exclusive economic zones in the Arctic Ocean: Canada, the United States, Russia, Norway and Denmark (Greenland).

The researchers found that the amount of ice originating from Russia that then melts in another exclusive economic zone doubles by mid-century.

However, the Central Arctic in the middle of the Arctic Ocean is a place where no country has exclusive economic rights. Due to the Arctic Ocean being more ice free in summers, this will become an attractive shipping route – especially because ships don’t need to get permission from another country to travel through it.