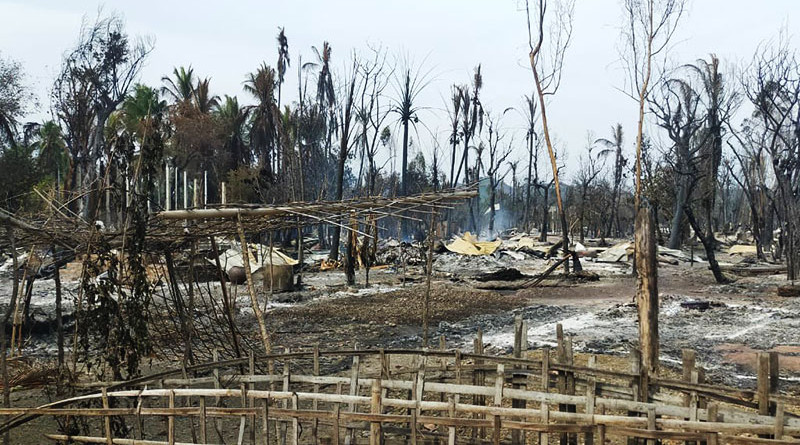 About 200 houses were destroyed by fire over the weekend in Lekka village, Mrauk-U Township, according to the village administrator and local residents.

The fire started at the southern end of the village after a military contingent of some 50 soldiers coming from Tin Nyo village entered Lekka at about 2 p.m. on May 16, residents of nearby villages said. The sound of gunfire reportedly preceded the blaze.

Lekka administrator U Kyaw Nyunt told DMG that the village’s middle school building, the kitchen of the local monastery compound and housing for teachers also went up in flames.

There had been 302 houses in the village, and residents said Lekka was reduced to just over 100 houses left standing after the fire.

Residents of neighbouring Buywet Manhyo village said the military column departed Lekka village at about 5 p.m. on May 16, and stayed one night at their village.

Most Lekka villagers have been living at refugee camps in Mrauk-U town and Pepinyin, Tin Nyo and Tin Htein Kan villages since April of last year due to clashes near the village.

U Maung Aung Sein, a resident of Lekka village, said he was saddened by the destruction wrought by the fire.

“Some farmers lost their tractor, fuel oil, paddy seeds to grow in the rainy season and rice for food. There’s nothing left for them to do cultivation,” he said.

U Tun Tha Sein, an Arakan State MP from Mrauk-U Township, said he would urge the Ministry of Social Welfare, Relief and Resettlement to provide aid for Lekka villagers whose houses were destroyed by the fire.

“We are thinking about what we should ask for in terms of help from the government and civil society organisations for villagers,” he said.

The Tatmadaw on May 17 said the Arakan Army (AA) set the fire in Lekka village after clashes between the Tatmadaw and the AA near the village. It said about 20 houses were destroyed in the fire, a figure significantly lower than estimates offered by residents.

The information officer for the AA, Khaing Thukha, told RFA that the Tatmadaw released the statement accusing the AA of setting fire to the houses in Lekka village in an attempt to hide their “war crimes.” He advised media outlets to interview local villagers to get to the bottom of what happened at Lekka over the weekend.

On May 4, about eight houses burned down in Nga Tauk Tu Chay village of Rathedaung Township.

More than 500 houses in Tinma village, Kyauktaw Township, were destroyed by conflict-related fire on March 22. The Department of Disaster Management in Arakan State provided more than K90 million (US$62,000) last month to rebuild them.