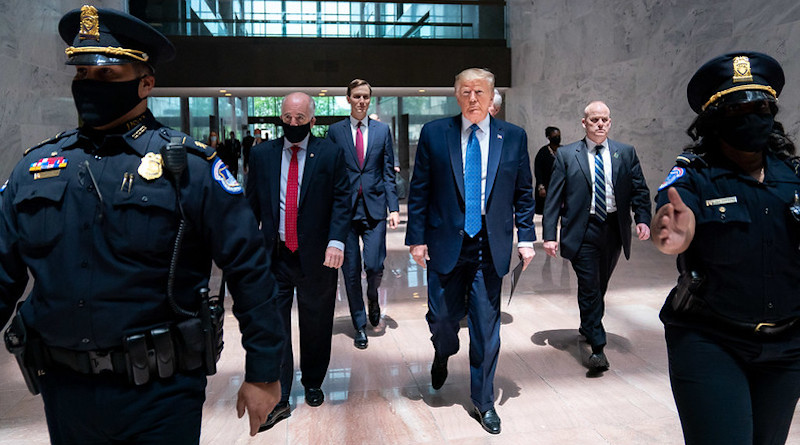 U.S. President Donald Trump is defending his promotion and personal use of an anti-malaria drug as a medication against COVID-19.

“This is an individual decision to make,” Trump said, adding that the decades-old drug, hydroxychloroquine, has a “great reputation.”  The president has tested negative for COVID-19 several times.

There is no solid scientific evidence that the drug can prevent or treat the disease caused by the coronavirus, which has killed an estimated 321,999 people globally.

A retrospective analysis based on data from the U.S. Veterans Health Administration determined that the drug as a treatment for COVID-19 – combined with the antibiotic azithromycin or not – not only may not help mitigate the virus’s effect, but it may also increase overall mortality.

In a reference to that study, the president declared Tuesday “it was a Trump enemy statement.”

During a Cabinet meeting later that day, Veterans Affairs Secretary Robert Wilkie criticized the document as not peer reviewed.

Trump said “thousands and thousands” of front-line health care workers are taking hydroxychloroquine and it is endorsed by “many, many doctors.”

“It doesn’t hurt people,” having been used as a treatment for malaria and lupus, Trump said. “I think it gives you an additional level of safety.”

The president, during the Cabinet meeting, said, “it doesn’t seem to have any impact on me.”

Physicians, however, say there are serious risks associated with taking the drug, including the threat it could interfere with heart rhythm.

House Speaker Nancy Pelosi, speaking on CNN Monday night, said the president should not be taking such a drug, especially considering he is “morbidly obese.”

Asked about that comment, Trump initially replied: “I don’t respond to her. I think she’s a waste of time.”

However, just before departing Capitol Hill, the president told reporters that “Pelosi is a sick woman. She’s got a lot of problems – a lot of mental problems. We’re dealing with people that have to get their act together for the good of the country.”

Trump surprised reporters Monday when he announced he had been taking daily, for a week-and-a-half, a hydroxychloroquine pill.

In the United States, more than 1.5 million people have been diagnosed with the coronavirus and 90,000 have died.

Several people associated with the White House have tested positive for COVID-19 this month.

In an interview with a Fox News reporter Tuesday, Vice President Mike Pence said he is not taking the drug, but “I would never begrudge any American taking the advice of their physician. Hydroxychloroquine is a drug that’s been around for more than 40 years for treatment of malaria.”

Pence explained that the Food and Drug Administration has approved off-label use for the drug so that doctors can prescribe it for nontraditional uses.

“So, my physician has not recommended that. But I wouldn’t hesitate to take the counsel of my doctor. Any American should do likewise,” the vice president said.

Trump continued to blame China, where the virus was first reported, for the outbreak of COVID-19 becoming a global pandemic.

“It should have been stopped by China,” he said again Tuesday.

Many epidemiologists predict the threat from the virus will not subside until a vaccine for the novel coronavirus is deployed on a mass scale.

“The vaccine, I think, is less important than some of the things they’re working on,” Trump said of laboratories around the world.

“They’re working on a cure and we have more than one doing it and they’re very advanced,” Trump said, without providing details.

“Trials of dozens of therapies and cures are under way,” the president said at the Cabinet meeting in the White House East Room.

Trump also asserted Tuesday that the overall number of new coronavirus patients nationally is declining. That is certainly the case in the hardest-hit area in and around New York City, but health officials have expressed concern about spikes of COVID-19 cases in other parts of the country, especially centered on nursing homes, prisons and meatpacking plants.

The focus of the Trump administration has shifted in recent days to reviving the country’s economy, which has been seriously damaged by the pandemic.

“All 50 states, as of today are partially opening their economies,” Pence, who heads the White House coronavirus task force, said during the Cabinet meeting.

Home » Trump Defends His Use Of Hydroxychloroquine